SIPs, and STPs are most efficient way of capturing COVID-led volatility: Neelesh Surana

We have been advising a staggered approach to investment over the next few months, SIPs and STPs are the most efficient way of capturing the volatility.

After the recent rally of about 40 percent from the lows touched in March, a staggered approach over the next few months would be advisable. SIPs and STPs are the most efficient way of capturing the volatility, Neelesh Surana, CIO, Mirae Asset Investment Managers India Pvt. Ltd, says in an interview to Moneycontrol’s Kshitij Anand.

Q) The Indian market has rallied in the last three months ignoring the fundamentals. What are the factors that can cap the upside?

A) Post the recent rally of about 40 percent from the lows reached in March, let's revisit the positives and negatives.

On the positive side, factors related to strong rural recovery, low-interest rates, and policy response will help recovery. Globally, we have seen a massive unleashing by both the government and central banks to inject liquidity in the real economy.

In India, the RBI has delivered a strong monetary stimulus through three key measures injecting liquidity and lowering the interest rates. 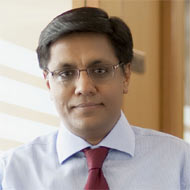 As a backdrop, it is important to note that prior to the COVID crisis, the Indian economy was already in a downtrend and on the way to recovery.

The GDP growth, corporate profit /GDP and ROE were all close to 15-year lows pre-crisis. Given that the base was already low, the room to go down is limited post the crisis.

On the negative side, the virus is going to dictate the timetable of normalcy and thus estimates are highly contingent upon duration and intensity of the pandemic.

Post the recent rally of about 40 percent from the lows reached in March, we would tend to assume that markets could consolidate.

We have been advising a staggered approach over the next few months. SIPs and STPs are the most efficient way of capturing the volatility/downside.

Q) Which is the one word you will use to explain the first six months of 2020 and why?

Q) Where do you see markets and earnings heading in the next six months?

A) The short term is always difficult to predict. We would assume that post the recent rally of about 40 percent from lows, markets could consolidate.

COVID-19 is a “one-off event that would impact FY21 earnings significantly, but FY22 EPS will revert to mean. In the current context, P/BV would be a better measure for valuation which is at a multi-year low.

Even if we assume a 15 percent cut, P/E at 16x FY22 is reasonable for two reasons- “earnings” would still be sub-optimal to potential, and more importantly the impact of low-interest rates.

Few qualitative factors indicate why markets are cheap, including the widening gap between valuations of unlisted company’s vs listed companies in the same sector.

Q) Which sectors are likely to be the leaders and the laggards in the next six months?

A) We do not invest from a six-month viewpoint. However, from a long term viewpoint, we like select financials, insurance, PV, paints, and healthcare.

We believe that post-crisis, quality large companies will become stronger. As a house, we have been following a two-pronged approach – a sort of barbell strategy.

Our first priority is to buy high-quality sector leaders, which have now corrected, particularly in consumer-facing businesses. At the other end of the spectrum, we are also participating in “deep-in-value” businesses.

The second bucket was attractive even before the virus issue and includes companies like government entities, utilities, energy, etc. Overall, we are getting favourable value across sectors.

Q) Many new investors joined the party on D-Street in the first six months to start their journey towards becoming millionaires. What are the survival tips you will give them to keep them afloat amid volatility?

The best approach for new investors is to participate via well managed mutual funds in a disciplined and calibrated manner through the SIP route.

Q) Gold hit a fresh record high in the week gone by. Do you think it can again outperform equities in 2020? What is your outlook on the yellow metal?

A) Gold prices are likely to stay firm in the medium term. This is because global economies may struggle to recover from the slump caused by the virus outbreak.

Meanwhile, central banks and governments may continue with stimulus measures to boost growth. The huge monetary infusion by central banks may increase challenges for economies in the form of inflation and currency devaluation. This is expected to further increase the appeal for gold.

In the long run, investors may consider gold to diversify their portfolio, say up to 5-10 percent, especially to withstand times of uncertainty.