RIL AGM 2021: Here is how the stock performed on the company's AGM day in last 10 years

The annual general meeting (AGM) of Reliance Industries (RIL) is no less than a mega event for the investors of the company as it not only sheds light on the company's performance of the last year but also reveals the company's growth plan for the near future, among other things.

RIL will conduct its 44th AGM virtually on June 24, 2021, at 2 pm. The oil-to-telecom conglomerate said it will send its FY21 annual report, along with the board’s report, auditors’ report and other documents required in electronic mode to the members of the company.

In last ten years, shares of RIL saw mixed trends on the day of the company's AGM, reacting to the company's announcements, falling on six occasions, while rising on the rest AGM days. 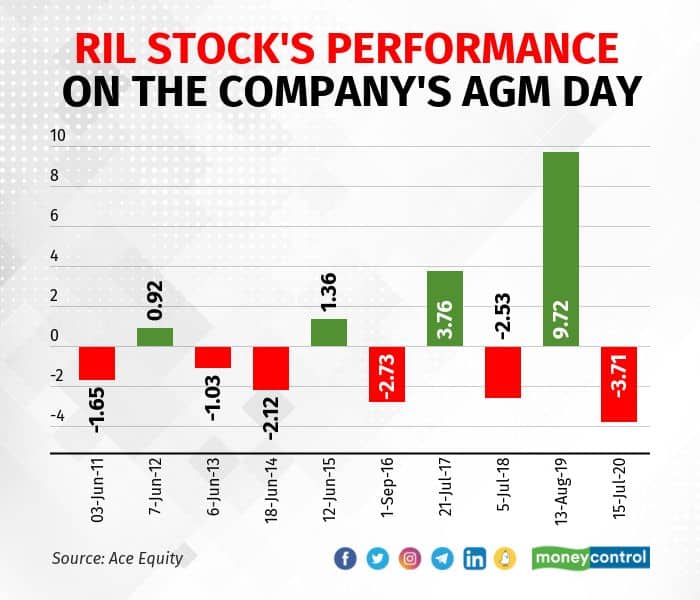 Experts are of the view that the company may make announcements across its telecom, retail and O2C businesses.

"In the upcoming AGM, Reliance is likely to announce kickstarting of 5G services which might begin in late 2021. Moreover, 5G phones are likely to be revealed in the AGM which might be another interesting development to watch out for," Gaurav Garg, Head of Research at CapitalVia Global Research told Moneycontrol.

As per global brokerage firm Goldman Sachs, updates around the following catalysts are expected:

Disclaimer: The views and investment tips expressed by investment expert on Moneycontrol.com are his own and not that of the website or its management. Moneycontrol.com advises users to check with certified experts before taking any investment decisions.
Nishant Kumar
Tags: #Reliance Industries #RIL AGM #RIL stock price
first published: Jun 23, 2021 10:04 am