Upcoming Webinar:Join us for Sustainability 100+ Dialogues 2021-Maharashtra Roundtable& know how the state is progressing on climate action
you are here: HomeNewsBusinessMarkets

NDA vs UPA: Nearly as many multibaggers on Modi watch, despite lower index returns

Now that we are almost at the end of Narendra Modi-led NDA government's tenure, we can compare the returns that the market gave during his stint with his predecessors.

In fact, out of 67 stocks, Sadhana Nitrochem and Allied Computers rose over 7,000 percent each in the same period. 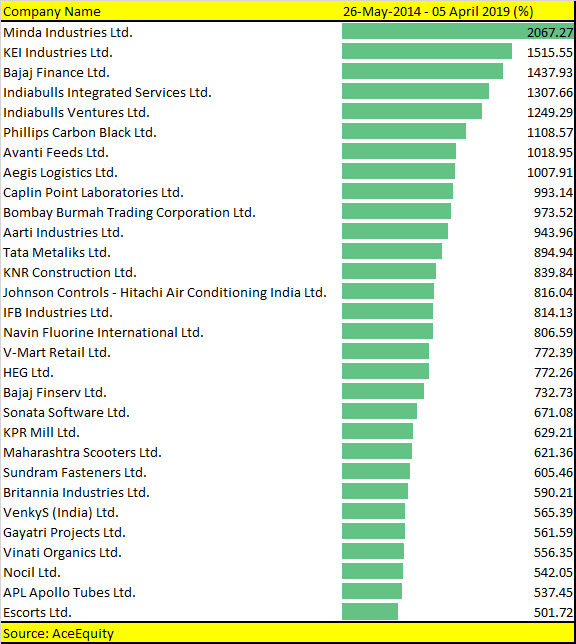 If we look at the stocks that have given stellar returns in the last five years, most of them belong to the mid and smallcap space. Hence, investors should filter quality stocks with long-term potential for their portfolio.

“Since 1977, market has gained during the financial year in which elections were held. During May, there will be volatility. We think that the pre-election rally is already on, and once the results are out we can see some profit booking and speculations,” Pritam Deuskar, Fund Manager at Bonanza Portfolio told Moneycontrol.

“Investors should stay invested in largecaps and larger midcaps if holding for more than six months or a year,” he said.

Disclaimer: The above report is for information only and not buy or sell ideas. Moneycontrol.com advises users to check with certified experts before taking any investment decisions.