Market gave positive returns in October for 7 out of 10 years; will the trend continue this year?

After a volatile September, all eyes are now on October, which started off on a strong note despite rise in Coronavirus cases across the globe, and upcoming US Presidential elections.

For the month of September, indices closed in the red, but the momentum picked up in October. Sensex has managed to reclaim 39K while Nifty50 is above 11,500 levels in October.

So can this month mean gains for investors?

Looking at the historic data, Nifty has given positive returns in October in seven of the last 10 years. The index rose nearly 10 percent in October 2013, followed by 2011 when it gained more than 7 percent, and in 2017, Nifty50 closed with gains of 5.5 percent in October, data from AceEquity showed. This year as well, the momentum looks strong as investors await stimulus from the US government. On the domestic front, robust microdata and upcoming festive season is keeping hopes high. Despite the positive news flow, experts see volatility.

“Yes, you are right Market has a track record of positive monthly closing for October month except 2008, 2009 & 2018. However, this October may be much more volatile keeping current Geo-Political tension & impact of Covid-19 on Global GDP in mind,” Amit Jain, Co-founder & CEO, Ashika Wealth Advisors told Moneycontrol.

“In my view, the market trend may not be very bullish this October, like some of the previous Octobers in 2011, 2013, 2014 & 2017 where this month has given more than 5% monthly ROI. In contrast, we believe the trend may be mildly neutral to bearish for this month,” he said.

In terms of technicals, Nifty50 is on a firm footing. The level of 11200 is likely to act as crucial support for the index in October while on the upside if the momentum continues, the Nifty50 may even retest 11800 levels and come back.

“Historically it has been seen that bulls tend to dominate the market in October, this is mainly due to the start of earnings and the approaching festival season. Unless there is any global reason there is a higher probability of bullish activity in the market,” Gaurav Garg, Head of Research at CapitalVia Global Research Limited told Moneycontrol.

“In the current scenario, Nifty has taken a minor correction which was necessary. The level of 11200 seems to be immediate support and once nifty breaches the range of 10800-11300 and sustains above it we can see Nifty at 11800 in the coming month,” he said.

Important Events to watch out for:

The Monetary policy which was scheduled, and a 3-day meeting will now start from October 7-9 will be an important event eyed by domestic investors. September car sales data was strong which helped the sentiment.

1)    Uncertainty of US Election results due to ineffective handling of Covid-19 & racist social unrest in the US, which may turn election results on either side. Unlike Barack Obama, it may not be a one-sided election.
2)    Current Geo-Political tension & almost war-like situation in the middle eastern region, China, US & India.
3)    Increasing declining faith in the US Economy & Declining dominance of $ due to excessive money printing.
4)    Most severe Economic Depression in Old age Global business models.

Institutional activity picked up in October. Anecdotal evidence suggests that foreign institutional investors (FIIs) were net buyers in Indian markets in eight of the last 10 years. 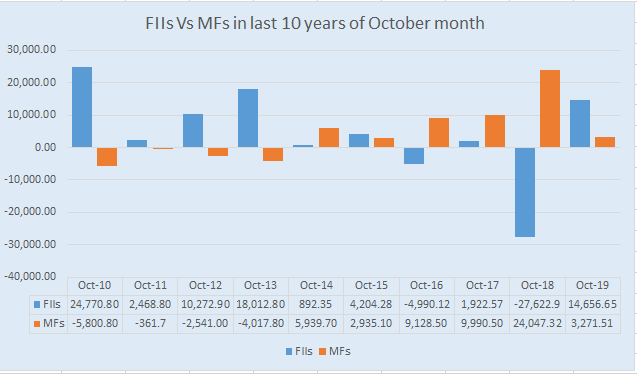 “As per the past trends it has been observed that there is an increase of inflow by the FIIs in the month of October while most Mutual Funds pulled out money during the same month. Last 10 years it has been observed that FII have net buyer in the month of October, 8 times out of 10 times,” Jashan Arora, Director Master Capital Services told Moneycontrol.

“The upcoming elections of the USA and the rising tension on the Indian borders could prove to be a deterrent for the foreign inflows. Another factor to take into consideration will be the decision of RBI regarding the further rate cuts which will be based on the inflation data,” he said.

Arora further added that taking into account the above-mentioned factors and given the past trends, we could say that the FIIs would continue to follow the past trends given the fact that the inter-border tensions developing between India and China do not surge further and the events relating to the US elections do not oppose the interest of the Indian Economy.