India's weight has doubled in the global index in the last two years on market outperformance while China has dropped. Experts see the trend continuing but say high valuations may be a bump

The rise of the Indian stock market on global charts over the past year at the expense of China and other emerging markets is fuelling concerns about whether the trend will continue.

India has almost doubled its weight in the MSCI Emerging Market Index to 16 percent in the last two years to become the second-largest market in the index, according to the data available at the end of October 2022.

China, on the other hand, has seen its weightage fall below 27 percent for the first time since Q1CY17 as the Shanghai Composite and Hang Seng indices are down 15 percent and 25 percent, respectively, year to date. On the other hand, the Nifty is up 3 percent YTD. 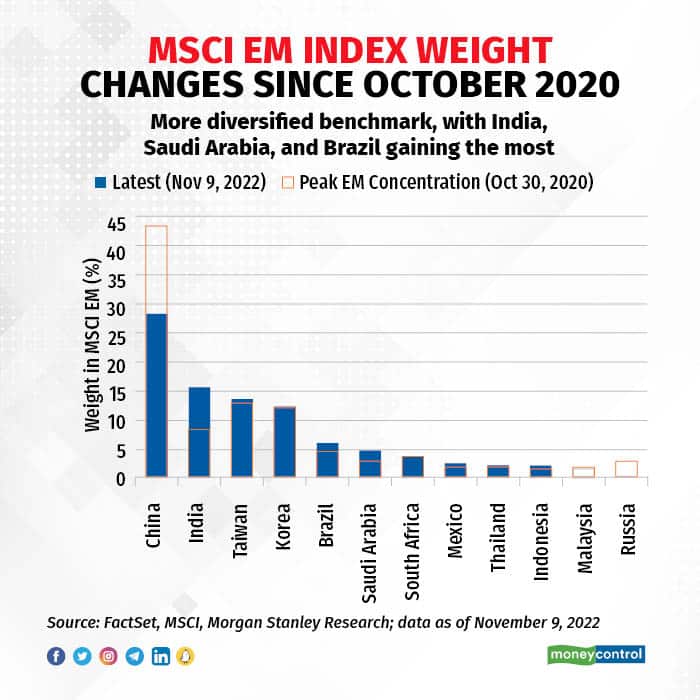 There is a clear shift in the way foreign portfolio investors (FPIs) are looking at China within their basket of emerging markets (EM). Their focus is now becoming less China-centric as they eye markets like Korea and Taiwan for early cycle recovery. The major beneficiaries of this shift have been Korea, India and Taiwan, while Saudi Arabia and Brazil have also gained at the expense of China.

“The biggest reason for the drop in MSCI weight for China is the erosion of market cap of big Chinese consumer tech companies from Tencent to Alibaba, JD, NTES and many more,” said Devina Mehra, Founder – Chairperson, First Global.

This means that the fall in weight in China and rise in weight of India is mostly due to price action rather than active changes made to the index, she said. Also, the meltdown in the Chinese real estate sector not only impacted the FII investments in the sector but also made them wary of Chinese policies and regulations.

According to Srinivas Rao Ravuri, CIO, PGIM India Mutual Fund, “Index weights are a function of how stock prices of companies in the indices perform, their free float, among other factors. When the index constituents' stock prices are doing well relative to others, weightage will increase.”

Experts expect this trend may continue given the structural potential that is being unlocked by reforms and infrastructure investments (both physical and digital).

Manish Jain, Fund Manager, Coffee Can PMS, Ambit Asset Management, said, “RBI has done an incredible job of managing the tightening cycle as well as inflation and at the same time, the impact of the global slowdown on India has, so far, been fairly limited making us largely decoupled.” This makes India the best place to invest, from an equity market perspective.

Global investment bank Morgan Stanley, in its recent report, said it is ‘underweight’ on India in its market allocation framework from a tactical and valuation perspective but it sees compelling long-term opportunities in certain pockets which keeps it binding to the market.

“The diversification trend is propelled by both global narratives (eg structurally higher commodity price, multipolar world investing) and idiosyncratic stories in EM (eg the implications of social and economic infrastructure laid the foundation for the New India, the reform agenda in the Middle East and China's shifting growth model under the Regulatory Reset and Common Prosperity),” the foreign brokerage said.

Though it downgraded India's healthcare sector to 'underweight' due to unattractive valuations, Morgan Stanley upgraded India Industrials and India Utilities to 'equal-weight' as it feels the ongoing capex boom will drive the growth.

At the same time, it remains ‘overweight’ on India Financials as it believes that, “the progress made on the foundational ID and emphasis on infrastructure likely will lead to a credit boom, benefiting the financial sector while higher household income also helps the sector through improved insurance pricing and greater penetration.”

India has been a major beneficiary of the passive fund flows which have driven the performance of its stock markets so far but with rising valuations, FPIs are looking at markets like Korea, Taiwan, Saudi Arabia and Brazil to diversify. Experts believe that the flow of funds will likely continue though there might be some volatility in between. 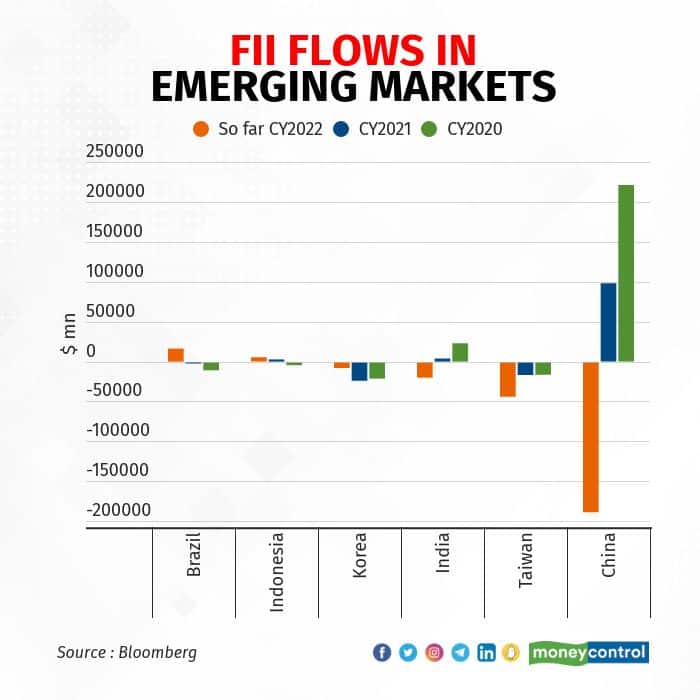 “India offers a stable regulatory regime along with policy efforts to propel a growth and consumption-driven economy with demographic dividend, over the long term and hence, it is natural that inflows will find their way to India,” said Ravuri.

However, Somnath Mukherjee, CIO & Senior Managing Partner–Product & Research, ASK Private Wealth, differed as he said, “India has not been a big beneficiary, at the margin, of outflows from China and this is because most FII already run significantly India overweight positions, and Indian valuations have gotten stretched quite a bit over other EM peers.”

Add to it, some of the global headwinds, especially of higher interest rates and commodity prices, that impact India’s macros adversely, and at the margin, India has not been the most attractive destination for EM equity flows, Mukherjee added. Over the longer term, though, India is likely to benefit as few markets offer the depth and breadth that India does.

India valuations have run up quite a bit over the past couple of years, making the market look expensive, which can deter fund flows in the immediate future. However, an important aspect to keep in mind is that government reforms have ensured that GDP growth is sustainable for some time to come.

“We expect broader markets to report double-digit earnings growth in FY23 and FY24, quite unlike the past decade. Hence, on a relative basis (risk-reward analysis) multiples do not seem expensive and will likely stick at the current levels,” said Jain of Ambit Asset Management.

“Looking at valuations, one needs to take into account two other aspects 1) composition of indices - commodity companies and PSU companies always trade at a discount to broader valuations whereas sectors like consumer, pharma and technology trade at a premium to broader markets, Indian indices have a higher weightage to consumer, pharma and technology sectors 2) Indian companies have delivered higher Return on Equity (RoE), which, in turn, leads to higher valuations,” added Ravuri of PGIM Mutual Fund.

Mehra of First Global concurred. “India has always been a relatively expensive market not just relative to China, but relative to most markets in the world and that still remains, which has also partially to do with the kind of companies that comprise the Indian indices,” she said.

However, India went through a long period of underperformance, from 2010 to 2020, relative to the global markets as well as its own history. Hence, “when India started to outperform in 2021, it was clear that outperformance would continue for some time and I still do not see that trend changing”, Mehra added.

Can China bounce back?

Change is a constant in today’s world and with the volatility associated with the equity markets, change is a given.

India has outperformed significantly and a reversal cannot be ruled out as valuations in some economies like China are at historically low levels.

According to Ravuri, “Such a scenario will be driven by the improving situation in China (such as easing Covid restrictions, economic stimulus, pick-up in demand, etc) and if foreign investors decide to book some profits in India.”

China looks to do better from these beaten-down levels but it is still unclear whether this will be a short-term phenomenon or will last longer. But in any case, experts say it is not likely to have any negative implications for India and “over the medium-to-long term, expect India (and China) to dominate all EM indices by sheer weight of their economic size, market cap and corporate diversity,” said Mukherjee of ASK Private Wealth.

One more aspect to consider is that this year Brazil, Indonesia and Saudi Arabian markets have performed better than India and going forward in terms of relative performance, India, though will remain in focus but may not be the top contender, feel some experts.

Disclaimer: The views and investment tips of experts on Moneycontrol.com are their own and not those of the website or its management. Moneycontrol.com advises users to check with certified experts before taking any investment decisions.
Gaurav Sharma
Tags: #Chinese stock markets #Indian stock markets #MSCI Emerging Market Index #Nifty #Sensex
first published: Nov 23, 2022 04:51 pm