Indian consumers are more optimistic than before about the prospects of employment and income. But inflation is adding a layer of caution when it comes to spending.

Indians are more optimistic than ever on the prospects of their country’s economic growth than they were six months ago but they are far from opening up their purses and spending as they did before the pandemic.

A look at the Reserve Bank of India’s consumer sentiment survey shows that optimism about the current situation as well as future outlook has increased over the past six months. That said, if we scratch the surface and look into sub-categories that form the headline indices, this optimism gives way to caution. Consumers may be more hopeful about employment and incomes but they are not ready yet to indulge in discretionary spending. That means India is yet to get her spenders that would boost the economic growth through demand. The following five charts lay out the good and the non-so-good parts of consumer sentiment: 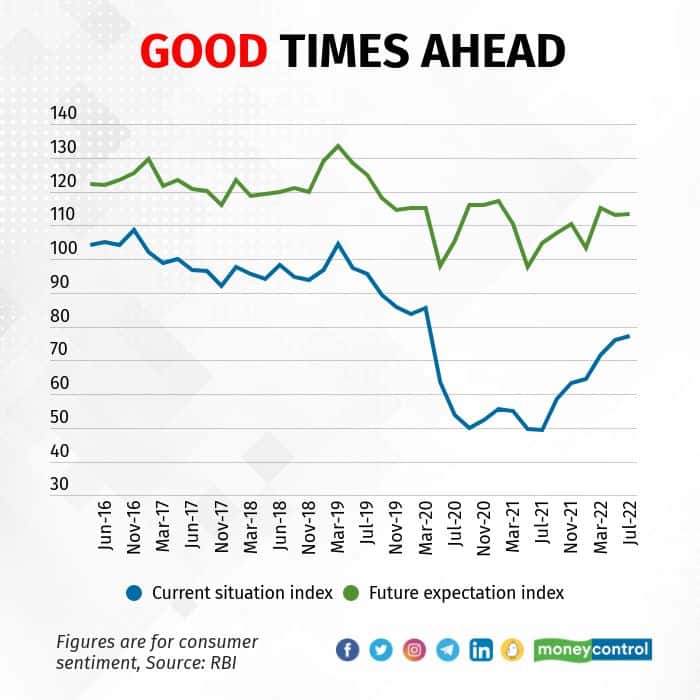 The current situation index is now at its highest level since March 2020 when the COVID-19 pandemic hit. The future expectations index though is still below pre-pandemic levels but it is getting there. Economic growth has recovered smartly over the past one year from the impact of the pandemic. In fact, most high frequency indicators are well above their pre-pandemic levels. Consumption demand has revived, visible through the rebound in consumer durables, services and even personal loans of banks. This has led to consumers being hopeful about future employment prospects as well. 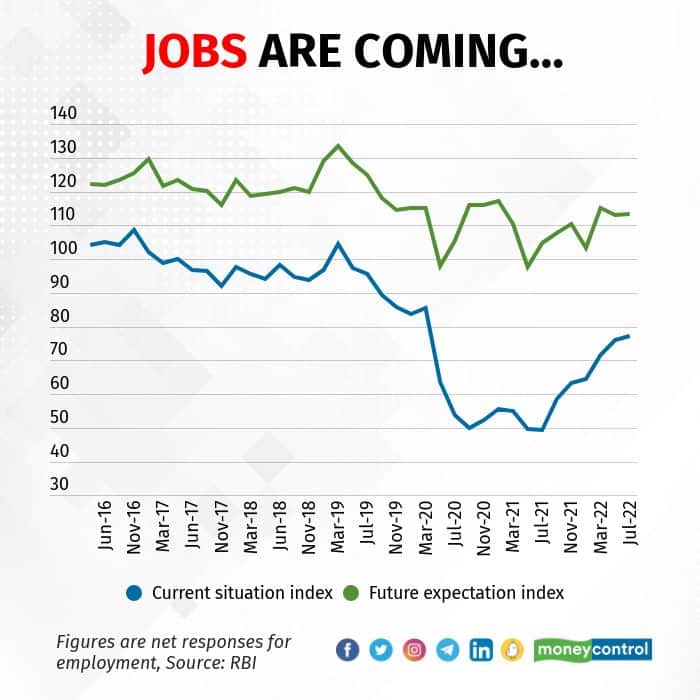 The consumer sentiment of the RBI shows that employment prospects have improved sharply over the past two years in tandem with the recovery in economic growth. Indians view that it would be easier to get jobs one year down the line but there is a thread of caution here too. In fact, the expectations have been coming down over the past three survey rounds. This shows that people have become cautious on the jobs front even though they view the situation much better than before. The employment data from Centre for Monitoring Indian Economy adds credence to this emerging caution. Employment rate has slipped marginally in July compared with its level in March. The overall optimism though has made people hopeful on the outlook of income. Consumers believe that the current situation on incomes has improved significantly although the optimism levels are yet to reach pre-pandemic. Future expectations too have improved a lot, as the chart above shows. Indeed, the revival in various sectors and the bounce back among small businesses have repaired the tear left by the pandemic on balance sheets. Further, firms in sectors such as information technology and finance have shown that compensation hikes can be sizeable to the workforce. Listed companies have reported a rise in their employment costs, a sign that wages are on the rise. What follows when incomes are expected to grow is that consumption spending increases. That brings us to the weak link in the consumer sentiment chain: spending. 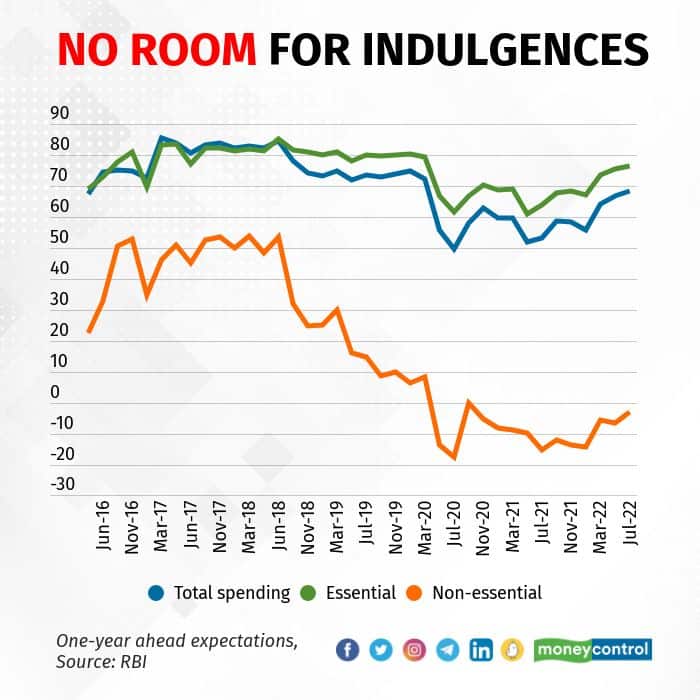 Indians are not yet willing to become big spenders and are holding their purses tight when it comes to discretionary spending. As the chart above shows, non-essential spending is still in the negative territory. Overall, spending and even essential spending have risen but slowly. The reason for this is inflation. As costs have gone up across consumption items, consumers are choosing to reduce their spending. That brings us to the final part of the RBI's consumer survey. The net response for inflation shows that consumers still see the price situation as deeply adverse for them. That said, there is some optimism seen in expectations one year ahead. However, the reading is still deep in negative territory. This could continue to check consumption impulses, especially towards discretionary spending.
Aparna Iyer
Tags: #Consumer sentiment #RBI
first published: Aug 8, 2022 04:48 pm