Research and broking firm Edelweiss Securities has come up with its Q1 earnings forceast for the media sector wherein it estimates revenue and EBITDA excluding Dish TV to jump 12.7 percent (11.7 percent in Q4FY18) and 18.1 percent YoY (14.4 percent in Q4FY18), respectively, in Q1FY19.

This is expected to be led by broad-based revival in ad spends and a soft base. We estimate the overall ad industry to report low double-digit growth. Subscription revenue of TV broadcasters is expected to clock low-teen growth benefiting from renegotiation of deals.

It expects Q1FY19 to be a decent quarter for multiplexes aided by strong movies like Baaghi 2, Race3, Raazi & Avengers–Infinity war and screen expansion. Print companies are expected to initiate cost rationalisation measures such as increasing mix of domestic newsprint/reducing pagination to soften impact of high newsprint cost. 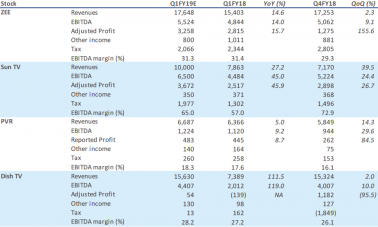 Ad growth likely to be robust for most players 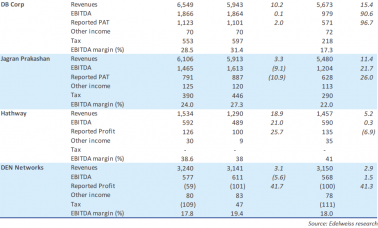 Outlook for the next 12 months

According to a report by Edelweiss, competition has intensified in Tamil GEC (Zee Tamil has gained share, Colors Tamil launched). Recent court order directing the Maharashtra government to frame an F&B policy for multiplexes poses a threat to the revenue of multiplexes; if implemented. It believes that the other states may follow the suit.

The research firm believes, TRAI’s tariff order will create a level-playing field in the TV space. However, its implementation remains a key monitorable. Competition in the OTT space is expected to further intensify as Zee5 is on track to host over 90 plus original shows by March 2019.

Edelweiss has top picks including Zee Entertainment Enterprises, Sun TV Network and PVR.Get access to India's fastest growing financial subscriptions service Moneycontrol Pro for as little as Rs 599 for first year. Use the code "GETPRO". Moneycontrol Pro offers you all the information you need for wealth creation including actionable investment ideas, independent research and insights & analysis For more information, check out the Moneycontrol website or mobile app.