Earnings will start to pick up in 2018: Arvind Sanger

We need to see more momentum on the job side. At the end of the day, the voters are looking for jobs and for economic growth and that is the real challenge for the economy, said Arvind Sanger, Managing Partner of Geosphere Capital Management.

The focus is on the key lessons for the government from Gujarat elections and whether policy will change. The expectation is that probably more accent on pro-farm policies. In an interview with CNBC-TV18, Arvind Sanger, Managing Partner of Geosphere Capital Management shared his views and analysis on the same.

Our hope is that the fiscal discipline will still stay but clearly if one were to parse the elections closely, rural distress seems to be something that this election indicates, he said.

We may see more rollout of direct benefit transfers (DBT) targeted towards the poor and the under-privileged, he added.

According to him, there were some negative fallouts from the goods and services tax (GST) implementation and the Gujarat elections. 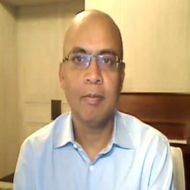 We need to see more momentum on the job side. At the end of the day, the voters are looking for jobs and for economic growth and that is the real challenge for the economy, said Sanger.

Market is betting that the earnings recovery which has been largely missing in action for the last couple of years starts to pick up in calendar 2018, he further mentioned.

Interest rate cycles in India have hit the bottom and synchronised global growth is strong now, he said.

We have reduced the exposure in non-banking financial companies (NBFCs), he said.

Q: What according to you will be any changes, if any, to the government's policy post the Gujarat polls?

A: That is a political decision for the government to make. Our hope is that the fiscal discipline will still stay, but clearly if one were to parse the elections closely, rural distress seems to be something that this election indicates and therefore, I guess our suspicion is that there will be a little bit more on the rural side. Part of the benefit of Aadhaar is that it allows for direct benefit transfer. So maybe we will see more roll out of direct benefits targeted towards the poor and underprivileged. The places that we would be most concerned about would be any aggressive purchase price support on rural farm products and that was one of the factors that drove inflation too high during the Congress era.

So one of the things that we would hope is that anything that is done on the rural front, is measured and well thought through and does not either cause inflation to become too much of a problem or cause the fiscal deficit to yawn. So within those constraints, I would expect some further support.

Q: Here is a bit of a dichotomy because if you see the Gujarat outcome, the urban area is where they have complete control and they would not want to let that go as well. So, what do you think would be the key driver from here on in terms of politics because you now have states coming up where you have equal mix of urban and rural divide? Karnataka to begin with, then of course you go into Rajasthan, Madhya Pradesh. So it is going to be a bit of a tough ask right?

A: The problem in India and I think the BJP suggested this in the last couple of years is that you have election every six months. If you start running your policy for every state election, frankly, it would be very helpful if the elections were held all at the same time, so we could deal with the same issues at the same time. The problem is if you start running the government from election to election, you can start making bad decisions. Let us take GST as an example. Clearly, there was some negative fallout from the GST implementation in the Gujarat elections, I am guessing because we were still in the middle of fixing the problems from the rollout. But the reality is by the time the National Lok Sabha elections happens in May 2019, the benefits of that should start to show up in the economy. At the end of the day, it is that old saying that it is the economy, stupid.

So at the end of the day, if the BJP can do enough through GST, through recovery and infrastructure and all the spending which starts to create jobs because the job engine is broken and it is not necessarily only the government that is, and it is largely not the government that is responsible but whether it is the bad debt problem with the NPA crisis in the banking system or it is lack of investment by the private sector or there is a variety of factors we can talk about, but we need to see more momentum on the job side. And I think that is more important than trying to run pillar to post saying okay, this time I do rural, next time I do urban. That I think at the end of the day, the voters are looking for jobs and for economic growth. That is the real challenge for the economy.

Sonia: What about the markets? If the BJP does opt for more forms of traditional populism in the coming year, how do you see the markets discount all of this?

So that is a given. I think some moderate uptick in inflation is also given and I think the markets are fine with that as long as earnings recovery continues. And as long as inflation, if any, that starts to ramp up is much more measured and not runs out of control. So the market is okay with some moderate increase in spending but not anything that is undisciplined.

Latha: So how would your own stock selection be? First of all, timing of your purchases. Are you comfortable buying now because it does look like the market is not going to give any serious dips and if you are buying, what will be the nature of the stocks?

A: We are buying. We have actually taken some of our hedges off in the last couple of weeks, not because we had any particular edge on the Gujarat elections, but we thought a lot of fears from a global market standpoint and others were overdone and our assumption was that the election would not be a disaster even if may not meet the somewhat aggressive expectations of the BJP.

But, at this point, we are selectively looking at opportunities and we are finding some opportunities but I can say that as any sectoral call that is big and far reaching, but we have found the, as we have said in the past, leisure sector in India and the business travel sector that looks interesting and we are continuing to look for opportunities in the leisure and travel area which seems to be seeing favourable supply-demand fundamentals. In addition to that, we look at opportunistically, are there going to be some opportunities that emerge out of some of the companies that are going to NCLT and the assets that emerge from there, are there going to be buyers who could be winners in that? That could create some interesting opportunities.

So it is more opportunistic than saying we have to go buy the index or we have to go buy a broad basket of stocks. One of the areas where we did reduce exposure in the past which had run up a lot is the non-banking finance companies (NBFC). But, it is more to redistribute it to other real sectors rather than making a negative call on the NBFC stocks.

Anuj: The stocks that have done the best over the last one year, and that has been the case globally as well, is the urban consumption stocks and they are now trading at lifetime high valuations. But, it is one pack where earnings have also been supportive. Would you want to buy some of these stocks? Tata Global is a case in point, but there are many.

A: Yes, there are, and frankly we have got one or two select names but they are not what would traditionally fall under consumption, but we think that those stocks have always traded a little rich for us, but we own stocks that benefit in general, directly or indirectly. I would say maybe in some cases indirectly from urban consumption, but yes, I think the consumption theme in India is very much alive and trying to find ways to play it in a way that is somewhat more reasonable to us and we played for instance, a retailer in Tier-III and Tier-IV cities.

So there are many urban consumption stocks and there are many facets to it, but yes, that is a very powerful story and it is clearly the Indian consumer and not the corporate sector that has led the charts. So anything that has benefitted from consumer led growth has clearly been winner.

Latha: Will you want to pick up anything from the infra, economy capital goods corporate banks segment at all in anticipation that now infra will start getting a look in?

A: Yes, selectively. Infra has always been of interest to us as long as some of the issues could get resolved. We own one or two companies that are involved in the road infra sector, but a broader infra play could be interesting to us. But also we talked about rural, some of the rural finance companies that have lagged, could those be interesting if the rural economy is going to start to look up which has been a laggard.

Sonia: You fleetingly mentioned the banking space. We have seen the prospects of speedy resolution of those 28 accounts, but a lot of the focus has now shifted to the PSU banks. So that is a theme that has played out a bit. You expect more rallies there?

A: I think the PSU bank, while we have already marked the bottom, clearly before the government announced that it was going to put money in. I am not that convinced that there is, for the broader PSU banking space, there is a clear path to glory because when you analyse the NPAs that have been assessed and you look at how the NCLT process is going, the banks will have to take further write downs because if they have taken 50 percent haircut on loans to companies or assets that are in NCLT, I think the recovery is going to be way less than 50 percent. And I think further write downs are coming there as well as, as other assets move into NCLT.

So I think the amount of bail out that is being raised from public markets and we saw Union Bank do their offering and the stock has continued to sell off after that, I am not so sure that it is a one way street. Very selectively one or two of the higher quality PSU banks like State Bank of India or Bank of Baroda may stand out, but in the broader basket, PSU banks, the write downs are going to continue to pile up and they are going to continue to be larger than what has been recognised as the NCLT assets get disposed of.