Gland Pharma IPO: 10 key things you should know before subscribing

The issue will close on November 11 and equity shares are expected to list on the BSE and National Stock Exchange of India on November 20.

The issue will close on November 11 and equity shares are expected to list on the BSE and National Stock Exchange of India on November 20.

Here are 10 key things to know about Gland Pharma:

The public issue comprises of a fresh issue of Rs 1,250 crore and an offer for sale of 3,48,63,635 equity shares by the promoter and selling shareholders.

The company in consultation with merchant bankers has fixed issue price band at Rs 1,490-1,500 per share.

The company already raised Rs 1,943.86 crore from 70 anchor investors on November 6, a day ahead of the issue opening.

Gland Pharma sells products primarily under a business to business (B2B) model in over 60 countries as of June 2020 including the United States, Europe, Canada, Australia, India and the Rest of the world.

After establishing in Hyderabad in 1978, it has expanded from liquid parenteral to cover other elements of the injectables value chain, including contract development, own development, dossier preparation and filing, technology transfer and manufacturing across a range of delivery systems.

It was one of the fastest-growing generic injectables-focused companies by revenue in the United States from 2014 to 2019 as per IQVIA report.

The company is expanding development and manufacturing capabilities in complex injectables such as peptides, long-acting injectables, suspensions and hormonal products as well as new delivery systems such as pens and cartridges.

As of June 2020, it had 267 ANDA filings including from partners in the United States, of which 215 were approved and 52 were pending approval.

The company said it had a successful track record of operating a B2B model with leading pharmaceutical companies such as Sagent Pharmaceuticals Inc and Apotex Inc as well as Fresenius Kabi USA, LLC and Athenex Pharmaceutical Division, LLC in the United States and the Rest of the world using long-term development, licensing and manufacturing and supply agreements.

A) It has extensive and vertically integrated injectable manufacturing capabilities with a consistent regulatory compliance track record.

B) It has diversified B2B-led model across markets, complemented by a targeted B2C model in India.

C) It has an extensive portfolio of complex products supported by internal R&D and regulatory capabilities.

D) It has a track record of growth and profitability from a diversified revenue base with healthy cash flows.

E) It has an experienced management and qualified team and is promoted by Shanghai Fosun Pharma.

A) The company intends to expand its product portfolio and delivery systems to drive revenue growth.

B) The company aims to continue investing in manufacturing technologies to build new capabilities to support the production of a future portfolio of complex injectables, primarily for the US market.

C) It intends to maintain a strategic emphasis on the United States, Europe, Canada and Australia, while continuing to pursue growth opportunities in China, India, Brazil and the Rest of the world.

D) To complement organic growth and internal expertise, it may also pursue strategic acquisitions of companies, products and technologies to add to capabilities and technical expertise or enter into partnerships to strengthen product and technology infrastructure in areas including steroidal hormonal products, suspensions, anti-neoplastics and nasal and inhalation products.

E) It aims to continue to maintain cost management focus, including in-house integrated manufacturing capabilities, across the business to deliver growth as well as to achieve economies of scale. 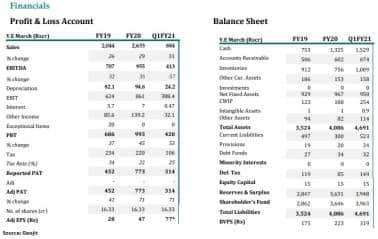 The United States contributed 66.74 percent to total revenue in FY20 and India 17.74 percent. The following table explains the same:

Here is the list of major equity shareholders holding 1 percent or more stake in the company:

Yiu Kwan Stanley Lau is the Chairman and Independent Director of the company. He is a director on the board of directors Solasia Pharma KK and TaiLai Bioscience. He was previously the chief executive officer of Amsino Medical Group, the chief operating officer of Eddingpharm Investment Co, and the president of China Biologic Products Inc. He also worked with Merck Sharp & Dohme (Asia) and Baxter (China) Investment Co.

Srinivas Sadu is the MD and CEO of Gland Pharma, with effect from April 2019. He previously worked at Natco Pharma and is presently a director on the board of Sadu Advisory Services. He has over 21 years of experience in business operations and management. He joined Gland Pharma as the general manager – exports in 2000, and elevated to the position of senior general manager in 2002, vice president in 2003, director in 2005, and chief operating officer in 2011.

Ravi Shekhar Mitra is the CFO of the company. He has over 20 years of experience in finance. Prior to joining Gland Pharma, he had worked at Indian Oil Corporation, Vedanta-Sterlite Industries (India), Ranbaxy Laboratories and Wockhardt.