Selected Articles from
Financial Times on Moneycontrol Pro
Webinar :Register now for webinar on 'Trade BankNifty in just 15 minutes a day'
you are here: HomeNewsBusinessIPO

Indian Railway Catering and Tourism Corporation (IRCTC) had a stellar start on October 14 as it listed at Rs 644 on the BSE, a 101.25 percent premium over its issue price of Rs 320 per share.

In fact, the opening price was much higher than what the street had expected and grey market had suggested. Analysts who spoke to Moneycontrol had expected it to list at around Rs 500-530 per share and the grey market premium was around 65 percent over the IPO price.

On the National Stock Exchange, the stock listed at Rs 626, up 95.6 percent over the issue price.

On the National Stock Exchange, IRCTC was trading 110.38 percent higher at Rs 673.20 against issue price and up 7.54 percent over the opening price.

The IRCTC listing is the best in the last two calendar years. Data shows that there have been five listings in the past at over 100 percent, in fact, better than what IRCTC witnessed today. Take a look at the chart below. 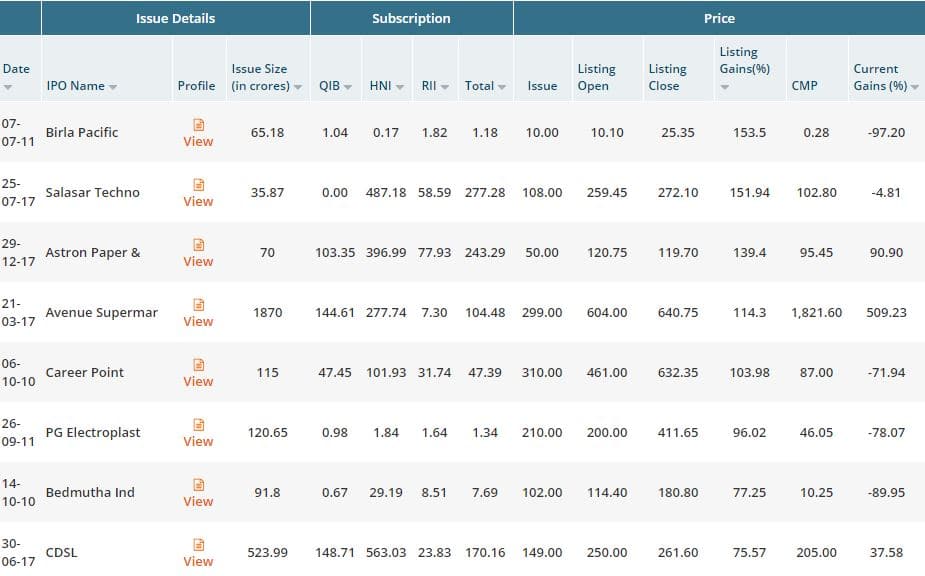 Investors who invested in the IRCTC IPO doubled their money in a single day. Retail investors and employees earned Rs 10 more for each share, as they got shares at a discount of Rs 10 per share.

IRCTC is a Mini-Ratna Category-I Public Sector Enterprise and a wholly-owned subsidiary of Indian Railways, the only entity authorized by Indian Railways to provide catering services to railways, online railway tickets for trains in India. It also provides non-railway services including budget hotels, e-catering and executive lounges to create a one-stop solution for customers.

The public issue had comprised an offer for sale of 2,01,60,000 equity shares. The shareholding of government in the railways' tourism and catering subsidiary reduced to 87.40 percent post issue.