In the third part of the hiring series, we look at how IT firms are looking to maintain a gender balanced work environment.

The Indian IT industry generates at least one lakh new jobs a year. But if you think that makes jobs readily available, the reality is different. That is because the industry, which employs more than four million people, has changed the way it hires. Basic skills are no longer in demand, and companies want candidates to be job-ready from day one.

At a time when the sector continues to be on a hiring spree, Moneycontrol looks into what has really changed in the way IT companies recruit. The five-part series looks at each emerging trend with a detailed lens.

In 2012, Sohini Gupta, a software developer at a mid-sized IT firm had a difficult pregnancy and had to extend her maternity leave by two months. Her manager’s message was clear: “Hand over the pending work in a week and resign”. Gupta was unfortunate because, back then, paid maternity leave was only for three months. Today, the same employer allows up to seven months of maternity leave and also a work-from-home facility for special cases.

Diversity, once a mere checkbox item at IT firms, is now a part of the board agenda. Not only are the various metrics of diversity measured on a regular basis, but any anomalies are discussed at board meetings also. As a result, the once-utopian concept of a 50-50 gender mix at work in the sector could become a reality in the not-so-distant future.

Take Accenture for instance. Rohit Thakur, the managing director and lead human resources, Accenture (India) said that they have approximately 2,00,000 women at Accenture, that is 43 percent of their global workforce. In India, women represent 40 percent of the workforce.

A 2018 research report by Accenture (When She Rises We All Rise) said that organisations can take action to include policies and practices that are family-friendly, support both genders and are bias-free in attracting and retaining people.

Accenture’s research also found that some policies targeted at women can actually be counterproductive. For example, implementing maternity leave alone is likely to hold women back from career progression. But when companies encourage parental leave (where men can also take leave), the negative impact on women’s career advancement is eliminated completely. 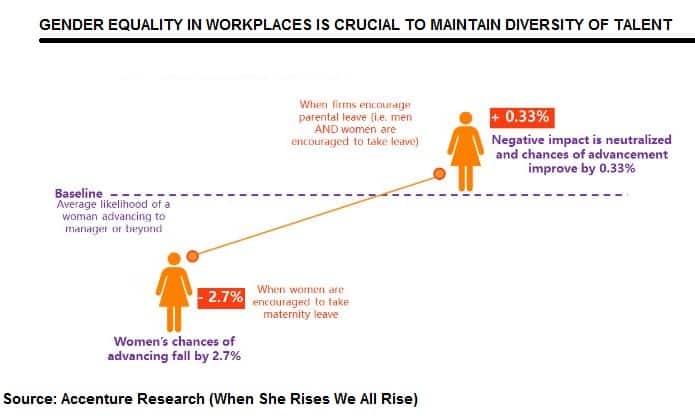 Thakur said that, in 2017, the company was among the first to set a target of a gender-balanced workforce by 2025, with female and male employees accounting for 50 percent each.

At Tata Consultancy Services, 50 percent of the new hires (below the age of 30 years) were women, according to the company’s corporate sustainability report 2017-18. Across all these organisations, the idea is to maintain gender equality so that women are hired without any bias. However, HR leaders clarified that the hiring at the entry level was purely on the basis of merit. TCS, for instance, has job descriptions that are gender-neutral and are using blind hiring to eliminate unconscious bias.

“Our new female recruits who come into TCS are encouraged to become tech ambassadors and be role models, inspiring more young girls to have a career in IT,” said the TCS Pay Gap Report 2018.

Earlier, job roles were advertised in the IT sector specifically looking only for male talent. The belief was that women skilled in technology were few and far and it would be “risky” to hire them. However, with the passage of time, there is a growing realisation that having more women in the workforce boosts productivity.

Organisations with diverse teams report a better financial performance, according to a study by the Boston Consulting Group (BCG). The study said management teams with above-average diversity reported earning nearly half of their revenue from innovative products and services. “Ideally therefore, they should form 50 percent of the workforce that produces these goods and services. We at HGS have set ourselves a target of having a 50 percent women workforce in India by 2020,” she added. They currently have 41 percent women employees.

Considering that women form the largest chunk of employees in the IT sector compared to all others, companies have also realised that there is a need to nurture this segment. From offering better incentives for hiring women at the entry level to improving workplace practices, companies have tried to pull all stops to ensure a diverse mix of talent.

SAP has about 32.9 percent women in the workforce and reached their goal of 25 percent women in leadership in 2017. The company has made a commitment to increase by 1 percent every year, leading to 30 percent of women by the end of 2022.

There is a perception among male employees that organisations offer unfair incentives to women. IT firms are trying to change that.

Srikanth Karra, CHRO – Mphasis, said that the idea was to make every employee have a sense of belonging to the organisation.

Since a lot of women drop out of companies after maternity leave, companies have started offering counselling early on.

At Accenture, they have the Returning Mothers Programme, designed to provide new mothers with the support of an experienced woman executive who has successfully made the transition from maternity leave and returned to work and to a successful career. Thakur said that they had more than 1,100 maternity leave coaches as a part of this program. In 2018, more than 95 percent of new mothers at Accenture in India returned to the workplace.

While companies and their employees may not overtly discriminate, there are subconscious biases that creep into the system. These include unwelcome remarks, sexually-coloured jokes and not assigning expectant mothers to crucial projects.

Vinita Shrivastava, the chief people officer – Sasken Technologies, said that they were planning to use design thinking in their hiring, retention, and leadership building processes to come up with the right solutions for removing implicit gender biases.

“We also plan to conduct theatre-based scripted role plays in the organization to spread awareness on unconscious biases,” she added.

Similarly, this year, HGS will implement a mandatory sensitization program for all employees at all levels on conscious and unconscious bias, round table discussions and launching a technology-led ‘Work@Home’ concept for women.

Apart from gender diversity, IT firms have also been open towards employees who identify themselves as a part of the Lesbian, Gay, Bisexual, Transgender and Queer (LGBTQ) community. Sensitisation sessions are held to ensure that there are treated on par with others.

At HGS, Harsh said that the company had started taking steps to be more LGBTQ-inclusive, be it counselling their recruitment teams or setting up gender-neutral restrooms in each of their centres. However, she agreed that there was a lot more to be done.

Similarly, special benefits like insurance and medical cost coverage are also becoming common among the IT firms. Some companies like Mphasis offer gender reassignment leave for LGBTQ employees.

Employee awareness campaigns across these companies have now become common. In fact, companies are also ready to offer special facilities for LGBTQ staff.

Accenture, for instance, was the first to introduce medical cover for gender reassignment surgery in 2016. Thakur said that to ensure gender fairness, the company has enabled the systems so that employees can use their preferred name without the need to provide any documentation.

At a time when merely 26 percent of women are a part of technology/IT firms, the steps taken by these companies are only one way to ensure that the gender diversity mix stays intact. Continuously pushing the diversity agenda while ensuring that all employees feel welcome is what will ensure a gradual move towards 50-50 and boost women’s participation in the workplace.