The Economic Survey said that there should be a PSB Network (PSBN) that uses technology to screen and monitor borrowers comprehensively.

The Economic Survey 2020 has suggested that public sector banks (PSBs) can use a GTSN (goods and services tax network) type of network using big data and artificial intelligence for loan disbursements.

This system has been advised as a mechanism to prevent defaults by large borrowers. Non-performing assets have been a cause of concern in the banking sector.

"A GSTN type of entity should be setup to enable the use of big data, artificial intelligence and machine learning in credit decisions, especially those pertaining to large borrowers," said the Survey.

GSTN provides the shared IT infrastructure and related services to the government and taxpayers. It is an interface between those paying GST and the authorities.

The report added that as the government is the owner of all the PSBs, it will have the right to use the data that these banks generate during their business. Therefore, the Government as the promoter must set up this entity that will aggregate data from all PSBs to enable decision making using big data techniques.

The patterns in default that such powerful techniques can unearth are far beyond the capacity of any unscrupulous promoter to escape. Therefore, such investments are critical to ensuring better screening and monitoring of borrowers, especially the large ones

While the Economic Survey pointed out that PSBs face challenges like high operating costs, disjointed process flows from manual operations and subjective decision making, it said that fintech could be used to predict possible defaults. 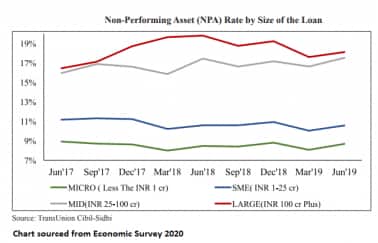 “A large proportion of NPAs of Indian banks, especially PSBs, could have been prevented if data and analytics were employed in corporate lending. The rates of default were the highest with larger loans (above Rs 100 crore),” said the survey.

It added that an analysis of the annual reports of the large defaulters suggests that the quality of audit disclosure in these firms was very poor. Data showed that out of 12 large defaulters, one of them had just one indicator disclosed with most others having three to four indicators disclosed of the eight leading indicators. 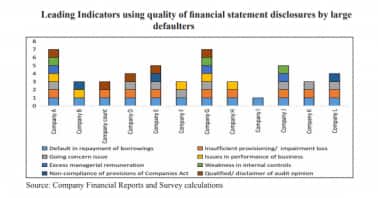 “This is an easily detectable characteristic that a robust credit analytics platform could easily flag,” the Economic Survey added.

How will it work?

The Economic Survey 2020 has said that borrowers could be made to share geo-tagged (using GPS) evidence of the collateralised assets. The report said that wilful defaulters have a natural incentive to misrepresent the value of collateral. In more egregious cases, it said that they may pledge fictitious collateral.

“Data can come to lenders’ rescue in such cases. For example, geo-tagging – the process of adding geographical identification such as latitude and longitude to photos, videos or other media – can help lenders keep track of the location of assets,” it added.

An additional step is the setting up a PSB Network (PSBN) similar to a GSTN. This PSBN would use technology to screen and monitor borrowers comprehensively.

The survey said that the PSBN would utilize other Government sources and service providers to develop AI-machine learning ratings models for corporates.

“The AI-ML models can not only be employed when screening the corporate for a fresh loan but also for constantly monitoring the corporate borrower so that PSBs can truly act as delegated monitors,” it added.

Here is how it will work: The Economic Survey said that the benefit of PSBN would be that it would take advantage of the data that all PSBs have of the last 50 years to create better underwriting solutions.

Using PSBN, they would be able to do better underwriting of loans to their corporate clients. Better decision making on credit underwriting would reduce the burden of NPAs, apart from helping them in fraud prevention.
Moneycontrol News
Tags: #Business #Economic Survey #Economy #video
first published: Jan 31, 2020 03:23 pm