Expectations were running low on account of pre-GST implementation adjustments in the quarter, and overall, the Nifty earnings have not resulted in any incremental negative surprise.

We are in the middle of the earnings season and it’s worth doing a preliminary health check on India Inc. Broadly, the companies haven’t done too badly, going by the aggregate headline performance. However, there are wide divergences that are worth taking a note of.

GST has hit many of the consumer facing businesses and while the larger companies appear to have managed multiple disruptions like demonetisation to GST well, the same doesn’t hold for the larger universe. The broad brush euphoria in the mid-cap space warrants tempering, even if  pockets of excellence might continue to deliver strong numbers.

Until Tuesday only a little over 620 companies had declared results but this included two-thirds of the Nifty companies. Half the BSE 200 and 42% of BSE 500 have reported.

Expectations were running low on account of pre-GST implementation adjustments in the quarter, and overall, the Nifty earnings have not resulted in any incremental negative surprise.

A slower rate of growth in profitability may be largely attributed to operating performance, especially pressure on operating margins. This is borne out clearly when we check the blended operating margin of Nifty companies (ex-financials) that shows year-on-year drop of 140 basis points. With headline inflation nosediving to historic lows, it is a paradox and points to underlying pricing pressure. 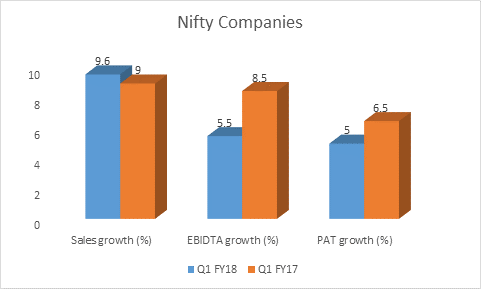 Smaller companies – not so well placed

The pressure on margin is more evident if we look at the broader universe of all companies that have reported numbers. 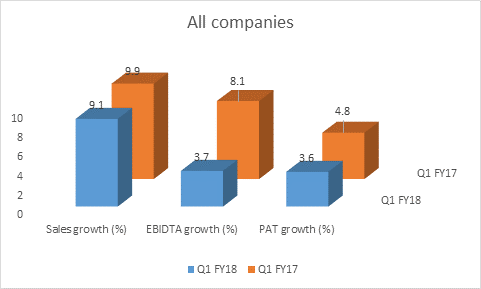 So while the input price pressure has been managed better by larger companies, the smaller companies witnessed a greater erosion in profitability.

For the BSE 500 universe, which is the relevant universe outside the large caps, the performance has worsened. The growth in sales and profitability is lower and operating profit growth has fallen significantly. 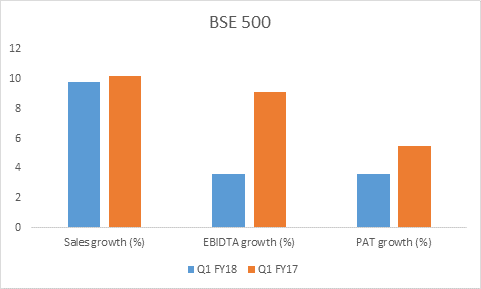 One cannot resort to a broad brush conclusion in a market as varied as ours and there are winners and losers across different market cap categories. While the major disappointments were outside the Nifty, the headline index had its own set of winners and losers.

No prize for guessing the early winners – the private sector banks like Yes Bank, IndusInd, Kotak and HDFC Bank.

The interesting takeaway from these numbers was that these banks felt the pinch of farm loan waivers.

However, they are winning in the market share game. Given their superior liability profile, the savvy private banks are not just grabbing the retail market but are also cornering the working capital finance business, thanks to the MCLR (marginal cost of lending rate) regime.

The other winner was Reliance Industries where record GRM (gross refining margin) and expansion in petrochemical margins aided the numbers. ACC was a surprise entry to the list that benefited from capacity expansion and firm cement prices. Finally, a good execution and strong subsidiary performance helped Larsen & Toubro.

The big losers from the Nifty so far have been the pharma duo – Lupin and Dr Reddy’s. De-stocking in the home market added to the woes of severe pricing pressure in the US generic business.

Asian Paints, after a stellar run, had a disappointing quarter on account of GST and firmer raw material prices. While the telecom companies did not underperform compared to muted expectations, on an absolute basis the numbers wouldn’t lend any newfound confidence.

IT companies surprisingly didn’t feature in the list of gainers as well as losers as Indian IT is taking baby steps in the transformation to ‘digital’ and incremental damages appear to be contained.

The big impact seen in the earnings season was on consumer-facing businesses – staples, consumer durables and electricals.

The preponderance of these companies in the BSE Mid Cap index impacted its numbers. Havells, V Guard, Marico, Crompton Greaves Consumer and Godrej Consumer Products were the notable disappointments. However, with most companies guiding to a better second half on the back of bunching up of pent up demand, investors have reasons to feel optimistic. 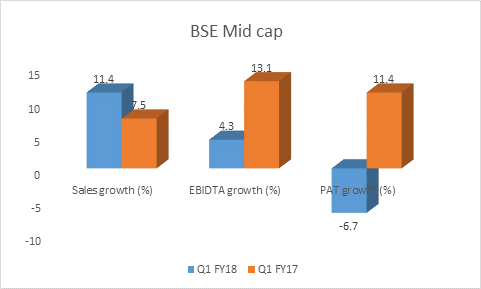 The sector that came out a big winner was brokerages – IIFL, Edelweiss, Motilal and the like; this doesn’t require explanation given where the equity markets are.

The small cap universe had no discerning trend and continued to be more stock/sector specific.

Some of the other little known names that rode on their own unique moats were Bhansali Engineering, Shakti Pumps, Control Print, Coromandel, Escorts etc. This space will continue to demand research to find the next set of winners. Investors got to be choosy as the blended valuation of small cap companies are at a significant premium to large caps. As of now, we are nowhere closer to the late teen earnings growth that the market estimates for the Nifty in FY18. While early days, earnings will have to be monitored carefully to incrementally justify the market valuation at 20X FY18 projected earnings.