How do ICICI Bank and HDFC Bank stack up, in five charts

ICICI Bank has been closing the valuation gap with HDFC Bank, which is still the most valuable private sector lender but is not able to command the premium it used to. Here's how the rivalry is shaping up

India's top two private-sector lenders HDFC Bank and ICICI Bank are on a divergent path and have caught the market’s attention.

ICICI Bank Ltd reported stellar earnings for Q4FY22, fuelling an already crowded trade in the stock. At 12.02 pm on April 24, the share price was up 1.5 percent at Rs 758.85 on the National Stock Exchange even as the benchmark indices were trading in the red.

HDFC Bank Ltd hasn’t had a good run and its valuation has been under pressure. The initial excitement induced by the proposed merger with HDFC Ltd has petered out. The lender reported a mixed set of numbers for Q4FY22, leaving investors somewhat disappointed.

ICICI Bank has been closing the valuation gap with HDFC Bank, partly due to a steady improvement in profitability metrics and the latter’s subdued performance.

HDFC Bank is still the most valuable private sector lender but is not able to command the premium it used to.

The following five charts lay out the banks’ performance over the past three years amid an unforgiving pandemic: 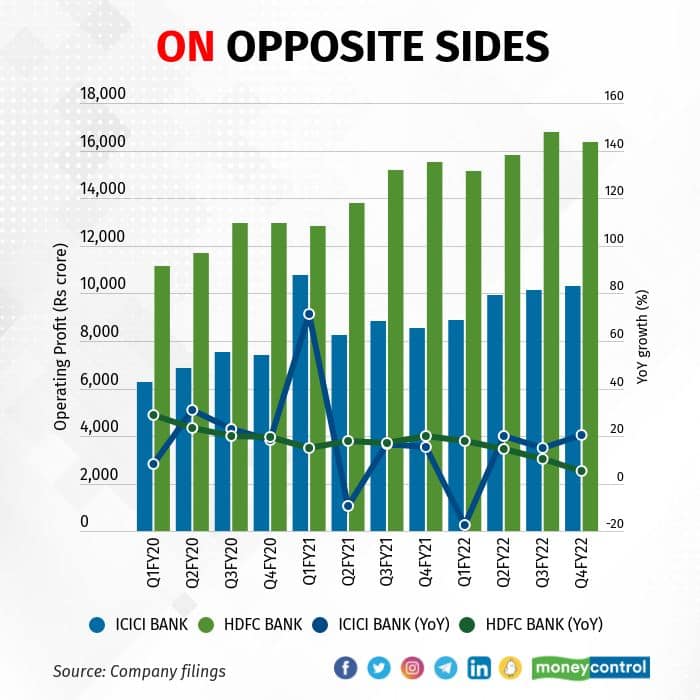 ICICI Bank's operating profit has shown a marked improvement compared to HDFC Bank but it is yet to shed volatility in terms of growth. HDFC Bank has shown consistency but growth has decelerated sharply in FY22. Yet another area where ICICI Bank has to shed volatility is quarterly net profit. While the bank has shown improvement in FY22, HDFC Bank has shown an enviable consistency here. One big reason for volatility in ICICI Bank's profits could be traced to provisioning. Here things are looking up for the bank as provisioning has come down. HDFC Bank has continued to maintain a certain rate of provisioning. Both lenders have kept a high provision coverage ratio, considerable comfort to investors. 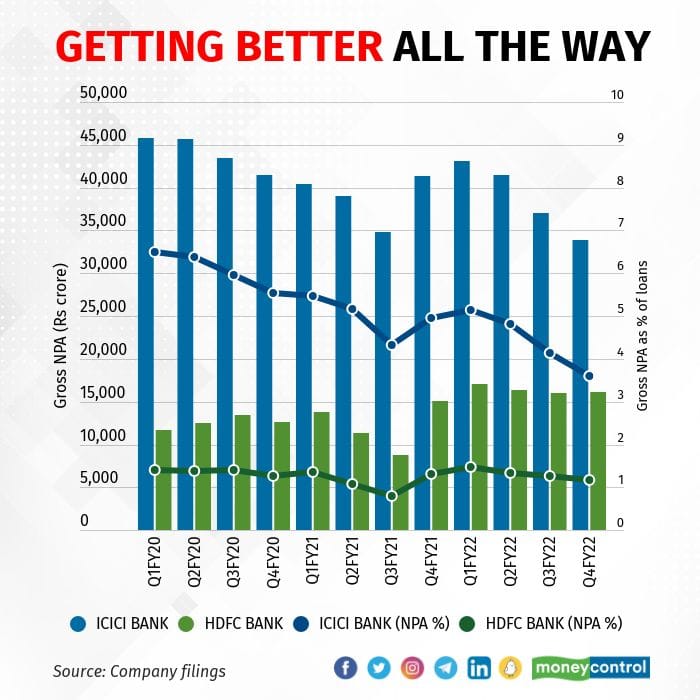 ICICI Bank's provisioning has come down as its gross bad loan pile has consistently fallen in the past quarters. The gross non-performing assets ratio is now down to 3.6 percent, close to historic levels. That said, HDFC Bank's gross NPA ratios still remain the best in the industry. HDFC Bank loses its ground in core operating income or net interest income growth. The lender has reported deceleration in the past two quarters. ICICI Bank's trend is the opposite here, showing an acceleration in NII growth. This is key support for the bank's valuations.