Expect sugar demand to be around 252 lakh tonne this year: ISMA

According to Indian Sugar Mills Association (ISMA), October-November sugar production was at 39.5 lakh tonne versus 27.8 lakh a year ago same period. ISMA also says sentiment would improve if government agrees to withdraw the stock holding limit earlier. ISMA is now arguing that now the sugar output is plentiful and there is no need for stock limits.

In an interview with CNBC-TV18, Abinash Verma of ISMA shared his views and readings on the same.

Stock holding limit is curtailing some kind of a buying from the traders, he said. 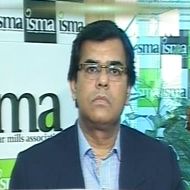 For this year, we are expecting the demand to be about 250-252 lakh tonne, he further mentioned.

On prices he said, it should be stable at a reasonable level of around Rs 35 per kilogram (kg).