This university operates from inside a central jail

As campuses around the country remain closed, a new university in Rajasthan is open and pioneering an unconventional education model inside a central jail

Mahatma Gandhi and Nelson Mandela have always owed their transformation, that in turn changed the world, to the learning they received inside the prison. It is not surprising then that a new university in Rajasthan founded only two years ago draws its inspiration from great social leaders like Gandhi, Mandela and Malcolm X. For the Swaraj Jail University inside Udaipur Central Jail, incarceration means an opportunity to transform convicts into community leaders.

While campuses across the country remain closed due to the coronavirus crisis, Swaraj Jail University is continuing the learning process of its inmate-students, in stark contrast to the way the society outside is dealing with the present and the future. If paralysis and uncertainty represent the free society today, the locked-up students of Jail University are working everyday confident of a better tomorrow.

Launched two years ago by a consortium of civil society groups like education and development NGO Shikshantar, the Vinoba Bhave-inspired Moved By Love project at the Gandhi Ashram, Ahmedabad, Art of Living and Edible Routes Foundation in collaboration with Udaipur Central Jail, this unconventional university lays its foundation on healing and possibilities of a new life. By confronting the flawed norm of banishing criminals from the society forever, the Jail University aims at compassion and rehabilitation. "The system has to take more responsibility instead of blaming convicts as 'failures'," says Manish Jain, co-founder of Swaraj Jail University. "We don’t believe the inmates are ‘failures’. Rather it is the larger system that has failed them," adds Jain, a Master's in education from Harvard University. "How we see crime and punishment have to be relooked at. This is a small step in that direction."

The small step has seen more than 100 convicts of Udaipur Central Jail signing up for the new possibilities offered by a university that seeks no eligibility and grants no degrees. There are no classrooms either. The student is both learner and teacher, relying on a self-designed learning programme built on talent and experience.

"The education system in our country makes big mistakes. It not only looks at learners as empty vessels, but also looks at learning as a linear process. The learners have tremendous talent and experiences that they could bring into the process," explains Jain, a former consultant to Unicef, World Bank and USAID whose education and development NGO Shikshantar led the initiative to create an alternative university inside the Udaipur Central Jail. A small prison with about 1,000 inmates -- 600 convicts and the rest undertrials -- the two-storeyed Udaipur Central Jail is a former haveli taken over by the British in 1888 to house soldiers. When the lockdown began, 250 inmates were transferred to different jails in Rajasthan. A marble statue of Mahatma Gandhi faces the jail's tall gate that is flanked by large murals on the prison walls.

"The murals are painted by inmates," says S S Shekhawat, the central jail superintendent. Nearly 100 murals have come up on the prison walls during the lockdown, all painted by students of the Jail University. The murals explain the university's philosophy of education: design creative spaces for allowing talent to flourish.

Painting is joined by music, organic farming, web designing, hair styling, photography, yoga and meditation, and catering as creative processes of learning in the Jail university. While there are several big prisons like Delhi's Tihar Jail famous for skill development of inmates, Swaraj Jail University focuses on change. "It is not basic skill training," says Jain. "It is about understanding yourself, your leadership capacities and your purpose."

It is not an easy job to bring inmates out of their "guilty zones" to connect with something they like. "An inmate is burdened with the guilt and blame of being a culprit," says Indira Talera, an Art of Living teacher in Udaipur who has been teaching yoga and meditation to the central jail inmates for over a decade. "They need love, compassion and sharing."

Talera, who worked with Jain to lay the foundation of the university two years ago, credits the support of jail superintendent Shekhawat as one of the major factors for the change inside Udaipur Central Jail. "Initiatives like a university require the whole-hearted support of jail leadership. The jail superintendent has been a leader throughout with his encouragement and belief in the correctional process," she adds. Several leading organisations across the country have extended their expertise in helping inmates with the self-learning programmes of the university. The Edible Routes Foundation, a leader in sustainable farming, conducts regular workshops for inmates while Art of Living teachers train them in yoga and meditation. Bangalore-based social innovation startup Navgurukul provides web design training.

"We have nearly 30 students learning organic farming techniques," says Sakib Khan, who works with Edible Routes Foundation. The inmates are taught permaculture, Japanese Miyawaki method for building native forests and waste water utilization with the help of film screenings, workshops and on-ground training. "Our agriculture is heavily dependent on chemical fertilizers. Imagine the change they will bring to farming, health and environment when they go back to their villages and lead organic farming once they are released," says Khan.

The change ignited by Swaraj Jail University is visible inside the central jail and outside. In February this year, Out of Box-Jail University Band, a sufi music band inside the jail, was a crowd favourite at the Udaipur World Music Festival. At the festival, the band members did their first-ever sound check with engineers. The opening song was Vasudhaiva Kutumbakam, composed by an inmate and musician Parameshwar Bhai. The popularity of the sufi band has made them an entrepreneurial service available for events outside the jail. 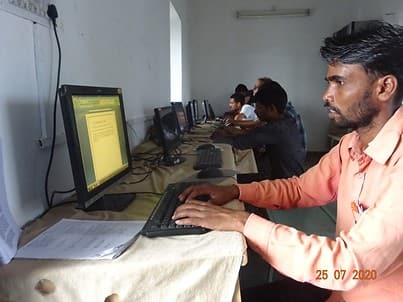 The university is also making entrepreneurial services available with its photographers, mural artists, organic farmers, catering teams, hair stylists and web designers. A jail guard accompanies them when the inmates go outside for their work. "There is only one guard who goes with them. We trust our inmates," says superintendent Shekhawat. "We are creating a space for the inmates to build upon it. They will be able to present themselves to the society and reignite the spirit of humanity," says Diken Patel, the Jail University co-founder and member of Moved By Love social project at the Gandhi Ashram in Ahmedabad.

Rajesh Singh, an inmate of the central jail, attended every Art of Living programme by the Jail University to learn yoga and meditation. Released in December last year after serving a 14-year term, Singh has been busy teaching yoga and meditation in his village near Bhiwani, Haryana, when the pandemic struck. "We had 60 students in the village school and 25 more for the classes at my home," he says. "We will resume the classes once the lockdown ends."
Faizal Khan
Tags: #education #society
first published: Aug 23, 2020 12:44 pm