UPCOMING EVENT:Watch leaders discuss the biggest issue of our times at the Sustainability 100+ Summit. Register now!
you are here: HomeNewsTrends

IPL 14: MS Dhoni hits it out of the park for CSK and Disney+Hotstar

The cliffhanger finish of the CSK-DC qualifier, with a powerful performance by Chennai skipper Dhoni, saw 7.2 million viewers tune in, making it one of the most watched games on Disney+Hotstar during IPL 14.

The first qualifier of the ongoing 14th edition of the Indian Premier League (IPL), which saw the MS Dhoni-led Chennai Super Kings (CSK) pitted against Delhi Capitals (DC), proved to be a strong game for Disney+Hotstar in terms of viewership.

In the 18th over of CSK’s innings, viewership on Disney+Hotstar, which has the digital rights for IPL 14, went up to 6.4 million, the highest level in the second leg of the league.

The last few balls were the gamechanger for both CSK and the video streaming platform as Dhoni led his team to the finals with a strong batting display, which attracted the attention of more viewers.

In the final over, DC's Tom Curran took the wicket of CSK’s Moeen Ali, making things tough for Dhoni’s team. Viewership, meanwhile, had soared to 7 million, the highest throughout IPL 14.

All eyes were on Dhoni and he did not disappoint. The former Indian skipper hit three fours to seal CSK’s spot in the final, which will be played on October 15.

Dhoni hitting boundaries got more viewers on board, helping the game to a peak of 7.2 million viewers, making it one of the most watched games on Disney+Hotstar during IPL 14.

Thus far, IPL 14 has seen viewership ranging between 5.7 million and 6.7 million viewers on the over-the-top (OTT) platform, including in the first half of the league.

However, the second match, between Delhi Capitals (DC) and CSK, couldn’t surpass the viewership of the MI-RCB opener. The first DC-CSK encounter saw viewership range between six and 6.5 million and drop to 5.1 million in the last over in DC’s chase of the 188-run target set by CSK.

When the second half of IPL 14 began with MI pitted against CSK, the match recorded a peak viewership of only 5.3 million.

While many experts tracking the OTT space had expected viewership to grow on Disney+Hotstar during IPL 14, the first half of the league, during the second wave of the coronavirus, saw disappointing viewership.

Now, with things opening up and Indians getting out of their homes, the remaining matches of the T20 league could attract more viewers.

According to a report by Media Partners Asia (MPA), an independent provider of research, advisory and consulting services, Disney+Hotstar is expected to reach a subscriber base of 46 million by the end of this year from around 35 million currently. 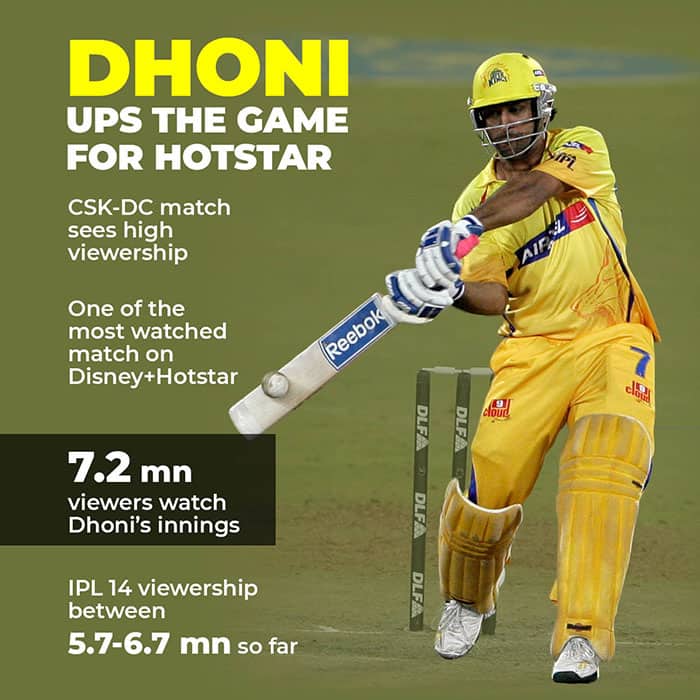