UPCOMING EVENT:Special webinar on Highlights of global investing in 2021 and what lies ahead' at 2 pm on 21st January, 2022. Register Now!
you are here: HomeNewsTrendsFeatures

Jimmy Donaldson (Mr Beast), who grew up in Greenville, North Carolina, founded a YouTube channel when he was in middle school, back in 2012.

Jimmy Donaldson, 23, a YouTube megastar better known as Mr. Beast, operates six YouTube channels with names like MrBeast, MrBeast Shorts and Beast Reacts that together have more than 91 million subscribers. People have viewed his videos more than 13 billion times. And last year as the pandemic raged, he became the most-subscribed YouTube creator in the US.

But unlike other YouTubers who have been satisfied with social media success, Donaldson wants more.

“I really want to be Elon one day,” he wrote last year on Twitter, referring to Elon Musk, the chief executive of Tesla and SpaceX and one of the world’s richest people. Donaldson later listed Musk as his “dream collaborator.”

To be more like Elon, Donaldson has been busy using his brand to make inroads in the business and tech worlds. He has launched a mobile gaming app and a “ghost kitchen” chain, MrBeast Burger, which has sold more than 1 million burgers. In March, he became an adviser to a financial network that provides business tools to online content creators. Last month, he signed a deal with a company to distribute his content across a range of social media platforms.

What Donaldson is doing may serve as a blueprint for the next generation of creators and influencers, who now number more than 50 million around the world and have become a formidable business force. The creator economy is the “fastest-growing type of small business,” according to a report last year by SignalFire, a venture capital firm.

“Mr. Beast is one of those creators who’s an incredibly savvy entrepreneur,” said Wayne Hu, a partner at SignalFire. “He’s got a fantastic content strategy, but at the same time he’s equally innovative and prolific in the experiments he’s running to monetize his audience.”

Yet Donaldson’s rise as a creator-entrepreneur, like that of many a YouTuber of his ilk, has been far from smooth. His early videos and posts were criticized for their use of slurs and offensive jokes. Several former employees said the working conditions at his companies — Donaldson has set up a variety of corporate entities including MrBeastYouTube, MrBeastCrypto and Rubber Duck Company — have been rife with favoritism and bullying.

Earlier this year, Donaldson also faced backlash from fans who lost significant amounts of money on a cryptocurrency scheme he had promoted and invested in. And he is trying to maintain rapid growth on a notoriously fickle platform. How he does and how his companies perform will be scrutinized to see whether creators can parlay their social media success into a sustainable array of businesses.

Donaldson declined to be interviewed. A representative for him declined to address the working conditions at his companies but said of the videos with offensive content: “When Jimmy was a teenager and was first starting out, he carelessly used, on more than one occasion, a gay slur. Jimmy knows there is no excuse for homophobic rhetoric.” The representative added that Donaldson “has grown up and matured into someone that doesn’t speak like that.”

“I think Mr. Beast inspires all of Gen Z,” said Josh Richards, 19, a TikTok creator in Los Angeles with nearly 25 million followers. “He’s giving a lot of kids a new path to take, to teach these young kids on how to be entrepreneurial, not just to get a lot of views or become famous.”

Like many members of Generation Z, Donaldson, who grew up in Greenville, North Carolina, founded a YouTube channel when he was in middle school, back in 2012.

To crack YouTube’s recommendation algorithm, he initially cycled through different genres of video making. He posted videos of himself playing games like Call of Duty, commented on YouTube drama, uploaded funny video compilations and livestreamed himself reacting to videos on the internet.

Then in 2018, he mastered the format that would make him a star: stunt philanthropy. Donaldson filmed himself giving away thousands of dollars in cash to random people, including his Uber driver or people experiencing homelessness, capturing their shock and joy in the process. The money initially came mostly from brand sponsorships.

It turned out to be a perfect viral recipe that mixed money, a larger-than-life persona and wholesome reactions. Millions began watching his YouTube videos. Donaldson soon rebranded himself as “YouTube’s biggest philanthropist.”

The combination was also lucrative. Though Donaldson gave away increasingly large amounts — from $100,000 to $1 million — he made it all back and more with the advertising that ran alongside the videos. He also sold merchandise like socks ($18), water bottles ($27) and T-shirts ($28).

“Once you know how to make a video go viral, it’s just about how to get as many out as possible,” he told Bloomberg in December. “You can practically make unlimited money.”

By 2018, Donaldson had about a dozen people working for him in a small office in Greenville. In early 2019, he moved his companies into a larger warehouse. His workforce had grown to around two dozen, people who worked for him said, though it was hard to keep track because of an expanding group of contract production assistants who helped on video shoots.

Many of his employees were part of a network of friends, family and acquaintances. Close friends acted as co-stars in his videos and developed YouTube followings off him.

“When you’re a YouTuber starting out, it’s like a family,” said Josh Hyman, 35, a writer in Greenville who said he enjoyed working for Donaldson. “Everyone employed there was a friend of a friend.”

Last year, Donaldson expanded his business. In his gaming app, introduced in June, users were told to hold a finger down on the phone screen as long as possible. The last person to take the finger off won a cash prize up to $25,000. The app was such a hit that Donaldson relaunched it in March, raising the prize to $100,000.

Donaldson also invested in tech startups, including a new type of gaming controller. In December, he started MrBeast Burger, which does not have a physical presence but allows diners to order food through delivery apps like Grubhub. He joined the audio chat app Clubhouse this year and became a regular, hobnobbing with investors and tech executives.

In March, Donaldson teamed up with the Creative Juice financial network to introduce Juice Funds, a $2 million investment fund that offers creators up to $250,000 in exchange for equity in their YouTube channels. Many fans praised him on social media for personally investing his money, though the funding came from Creative Juice investors.

Sima Gandhi, chief executive of Creative Juice, said that the company planned to work with many creators on Juice Funds and that Donaldson was the first. “Our aspiration is to roll out a series of funds with different partner creators,” she said.

Last month, Donaldson signed a partnership with Jellysmack, which will distribute and monetize Mr. Beast content across Facebook, Snapchat and other platforms. 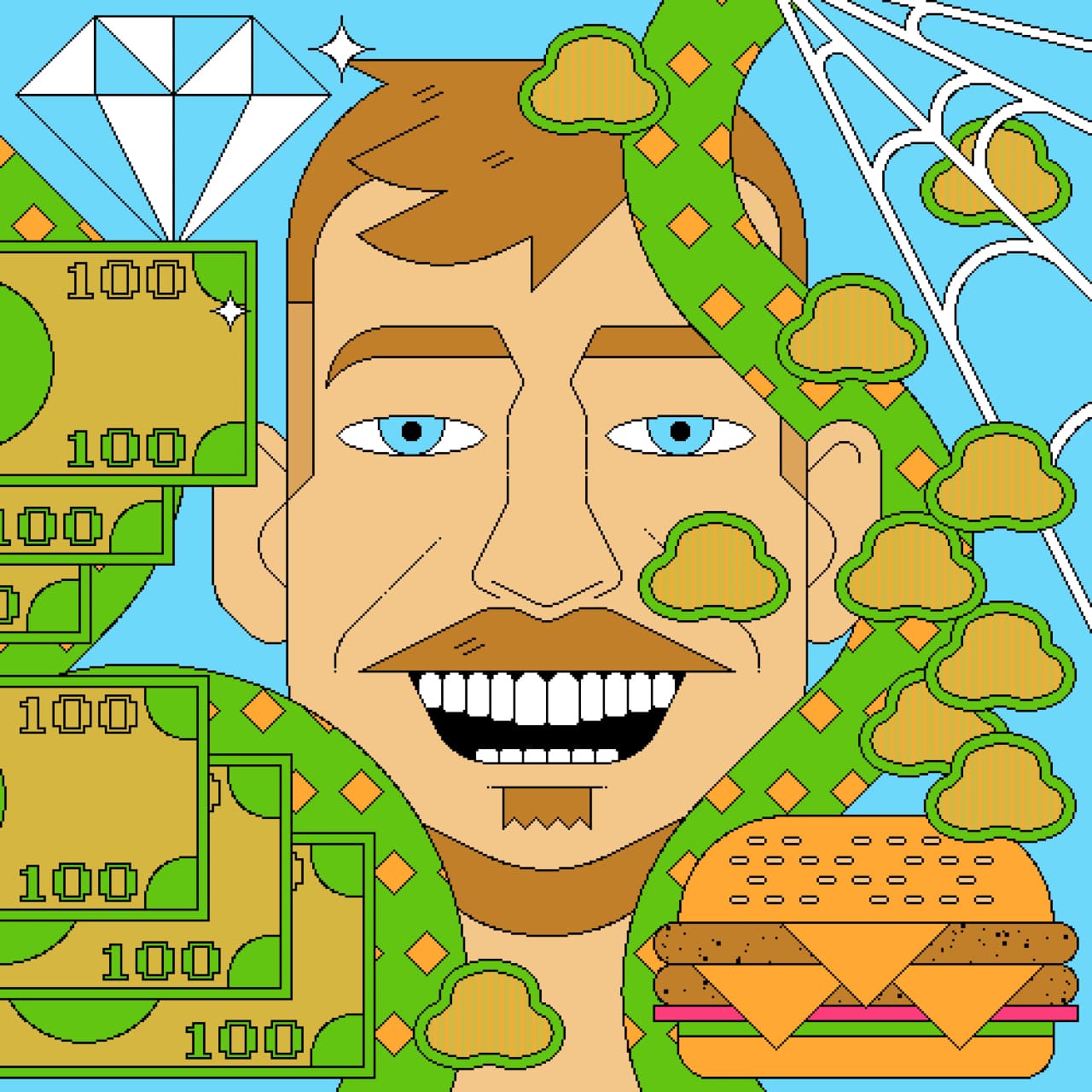 In Greenville, many went to work for Donaldson because of the philanthropic nature of his videos, said 11 people who worked for or with him, four of whom asked to remain anonymous because they had signed confidentiality agreements. While he was sometimes generous, they said, his demeanor changed when the cameras weren’t around. They described a difficult work environment.

Matt Turner, 20, an editor for Donaldson from February 2018 to September 2019, said Donaldson had berated him almost every day. Donaldson often called him by a phrase used to insult people with mental disabilities, Turner said, leaving him in tears.

Turner, who did not grow up with Donaldson, said that while his boss regularly featured his hometown friends in videos, he had struggled to get acknowledgment.

“I was not to be credited for anything I did,” Turner said. “I’d ask for credit, he’d credit someone else.”

Nate Anderson, 22, who moved to Greenville to work for Donaldson in March 2018, quit after a week over what he said were unreasonable demands. He said Donaldson was a perfectionist.

“Nothing ever worked for him,” Anderson said. “He always wanted it a certain way.”

Anderson later uploaded to his YouTube channel a tell-all video, “My Experience Editing for Mr. Beast (Worst Week of My Life),” which he said had brought death threats and hateful comments from Mr. Beast’s dedicated fans, many of whom are children.

Turner had a similar experience. “These kids don’t even know what they’re saying,” he said. “They’re just in this cult of YouTube stardom where they don’t want to see their biggest creator fall.”

Akash Rathod, 20, a sophomore in college and a Mr. Beast fan, said he was troubled by Donaldson’s silence on online mob attacks.

“There needs to be more from Mr. Beast on the issues his fans are causing,” he said. “It’s not enough just to make positive videos.”

The money rolls in

The behind-the-scenes strife has been imperceptible to those who watch Donaldson’s videos casually.

Ryan Morey, 25, a software developer in New Jersey who prefers nontraditional pronouns and Mx. for a courtesy title, often watches Donaldson’s videos with their partner, Emily Woods, 24, over dinner. They became fans of Donaldson’s videos after YouTube’s recommendations algorithm surfaced his content.

“He takes a lot of inspiration directly from Elon Musk for better or for worse,” Morey said. “It’s the cult of personality, all ambition all the time.”

Woods said she had recently bought a Mr. Beast sweatshirt and baseball cap, partly because she felt that giving him her money would lead to some good in the world. In 2019, Donaldson planted 20 million trees to celebrate hitting 20 million subscribers. In March, he started a YouTube channel, Beast Philanthropy, which has grown to over 3.2 million subscribers.

Donaldson now employs about 50 people, according to his representative. Former employees said a core of a dozen writers, editors and production assistants worked tirelessly to pull off stunts like buying everything in a store, giving people $1 million and only a minute to spend it, building the world’s largest Lego tower or buying an island.

His primary YouTube channel alone is generating up to $3.1 million a month, according to data from SocialBlade, a YouTube analytics service. At the current rate of growth, Donaldson is projected to overtake PewDiePie as the most subscribed creator in the world in the next year, according to SocialBlade.

“He believes that you can do whatever you want in today’s environment,” said Dee Murthy, chief executive of the Five Four Group, a brand incubator in Los Angeles.

There will be more Mr. Beasts, Murthy added.

“You’re going to see this proliferation of creators creating these very disruptive businesses,” he said.

Originally published in The New York Times on May 4, 2021.