Even the most dominant species can go extinct when the environment quickly changes: Paleontologist Steve Brusatte

Paleontologist Steve Brusatte speaks with Moneycontrol on the context of dinosaurs in the pandemic-hit world.

has travelled around the world digging up Jurassic-age fossils to understand how life changes over time. Brusatte, who teaches in the School of GeoSciences at the University of Edinburgh, Scotland, has named more than 15 new species of dinosaurs, including the tyrannosaur Pinocchio rex (Qianzhousaurus) and the raptor Zhenyuanlong. He has written several books for kids and adults, most notably the bestselling The Rise and Fall of the Dinosaurs: A New History of a Lost World. A speaker at the Jaipur Literature Festival, which concludes on Sunday, Brusatte talks to Faizal Khan about dinosaurs and the world today.

What does the story of dinosaurs tell us about our own pandemic-hit world today?

Dinosaurs have many lessons for us. They lived for over a hundred million years, and they experienced many things: volcanic eruptions, asteroid impacts, changing climates, drifting continents. Dinosaurs tell us that species are very adaptable over long time periods, but also that even the most dominant species can get in trouble, or even go extinct, when the environment quickly changes. Humans now are the dominant species, like dinosaurs once were. So, we would be wise to learn from their story.

Do we miss dinosaurs? What would have been the world like if they were alive today?

I am thankful that there are no T. rexes (Tyrannosauruses) out there, lurking, stalking us, wanting to eat us. And if there were, then humans probably would have never had the opportunity to evolve. It was only the death of (most) dinosaurs that freed the space for mammals to survive and prosper, leading to us today. But we also must remember that dinosaurs are still with us, in the guise of birds. It seems weird. But it would be like if all mammals died out in an extinction, except for bats. So let’s appreciate the dinosaurs that are still with us, over 10,000 species. By the way, that’s about double the number of mammals alive today.

When did you start writing The Rise and Fall of the Dinosaurs: A New History of a Lost World? What was the point of departure and how long it took to complete the book?

I started writing around 2015, and the book was published in 2018. It was a lot of fun to write. The book tells the story of dinosaur history: where they came from, how they became so big and so dominant, and how they went extinct. Throughout the book, I also tried to weave in stories of my own research, and the amazing discoveries of my colleagues and mentors, to tell the story of how paleontologists study dinosaurs.

I am now following that up with a book on mammals. It does not have a title, yet. But, I am nearly finished. It should be published in the summer of 2022. It will tell the story of mammal history, beginning 325 million years ago when the mammal lineage split from the reptile line on the family tree. Paleontologist Steve Brusatte's The Rise and Fall of the Dinosaurs: A New History of a Lost World was published in 2018

Continuing through time, mammals survived the dinosaur extinction, diversifying, spreading around the world and evolving into everything from elephants and whales to bats and primates, and ultimately us. It will be written for the general reader, so you won’t need a science degree or experience studying fossils to enjoy it.

How were you drawn to dinosaurs?

I was not one of those small children who was obsessed with dinosaurs and knew all of the names. But, my brother Chris was. It was through him that I became interested in dinosaurs, and then later obsessed myself. His bedroom was a dinosaur museum. He had hundreds of dinosaur books. He seemed to know everything about dinosaurs. I’m glad he taught me.

Where did you grow up? Did you have any early encounters with dinosaur stories?

I grew up in northern Illinois in the US, about 75 miles (120 km) from Chicago. Nobody has ever found a dinosaur fossil in my home state. Illinois is a very flat place, covered in cornfields and beanfields. No mountains or deserts. But, there are many older fossils there, and I started collecting these while a teenager.

Fossils of shells, corals, and other animals that are more than 290 million years old—much older than the dinosaurs. Collecting these fossils really got me hooked on paleontology. There is no feeling like being the first person to find a fossil of something that is millions of years old, and no human has seen before. 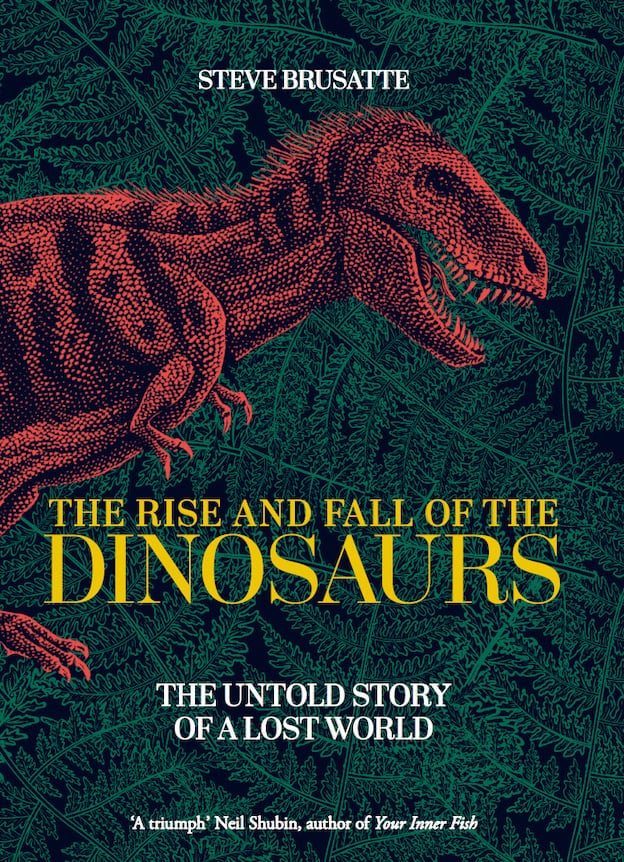 The UK cover of The Rise and Fall of the Dinosaurs: A New History of a Lost World

Where all did your research take you to write about something that disappeared millions of years ago? It is not like writing the biography of a person who is no longer alive, right?

I suppose it is like writing the biography of a dead celebrity. Everyone knows dinosaurs, or thinks they do, but there are many secrets that people don’t know, and many things we are still learning, and many mysteries still to solve. So, I guess it was like writing a biography of Elvis.

Are there any details you found particularly startling? Do we know anything about their personalities, traits, likings, how they were liked or hated by other animals, and how important they were to the world they lived in?

The thing that blows me away about dinosaurs is how long they lived. They ruled the world for over 100 million years. They lived everywhere, and grew to enormous sizes, some bigger than airplanes. There were probably millions of species. And then they disappeared suddenly, when the asteroid hit and changed their climate and environment. Well, most of them disappeared. One type survived: birds. So, there are over 10,000 species of dinosaurs still with us, and that is an awesome fact.

My favorite photo in the book is of my Ph.D advisor, the eminent paleontologist Mark Norell. It’s a photo from our fieldwork together in Romania. We are collecting a nest of dinosaur eggs from a riverbank. The eggs were so wet that it was difficult for our plaster bandages to stick onto the fossils. Steve Brusatte, who teaches in the School of GeoSciences at the University of Edinburgh, Scotland, collecting Jurassic-age fossils on Skye island in Scotland

So, what did Mark do? He used a trick he learned from working in Mongolia, which was apparently invented by the Russians. Covered the fossils with plaster bandages, then doused them in gasoline, and then set them on fire. It seems crazy, but it works. The fossils were protected underneath the bandages, and the fire dried them out.

Your book has been an international bestseller and praised by a former president and many others. What were the responses you have received that stood out?

The other thing is that both (former) President Bill Clinton and (former) Speaker of the House Newt Gingrich read the book and enjoyed it and talked about it in the press. It’s funny. They were bitter political rivals in the US in the 1990s, when I was growing up. It seemed like they were arguing with each other every day on the evening news. But they both liked my dinosaur book? Crazy.