Premiered at the Toronto film festival, The New Corporation: The Unfortunately Necessary Sequel is perfectly timed. It calls corporations out for their greed as the coronavirus pandemic exacerbates poverty and inequality.

The New Corporation: The Unfortunately Necessary Sequel premiered at the Toronto film festival.

Nearly two decades ago, an explosive new documentary at the Sundance film festival turned heads with an odd psychoanalysis of the corporation like a person. Titled The Corporation, the Canadian film's diagnosis said the corporation was pathologically self-interested.

The Corporation, which went on to win the Best Foreign Documentary prize at Sundance in 2004, now has a sequel—The New Corporation: The Unfortunately Necessary Sequel. This time, the prognosis is even more devastating.

Directed by Canadian filmmakers Mark Achbar and Jennifer Abbott, The Corporation also resulted in a bestselling book, The Corporation: The Pathological Pursuit of Profit and Power in the same year. The book was authored by Joel Bakan, a law professor at University of British Columbia. Bakan had also written and co-created the documentary with Achbar.

The original film charged that corporations are institutional psychopaths programmed to pursue profit and growth. Bakan, who has law degrees from Oxford and Harvard and once clerked for the Chief Justice of Canada's Supreme Court, built the argument that a corporation is deemed by law to be a person to help him analyse it the way a psychiatrist would.

The Corporation came out at a time when capitalism was facing a severe crisis following the collapse of giant corporations like Enron and Worldcom early this century. Companies were then hammered for malfeasance by people who came out in the streets around the world to protest against globalisation and the growing power and impunity of corporations.

Now nearly two decades later, what has changed? A lot and it doesn't look good, according to Bakan, who has stepped behind the camera with Abbott to direct the sequel based on his new book, The New Corporation: How "Good" Corporations Are Bad For Democracy.

The 106-minute film uses archival footage, interviews with thinkers, economists, activists, and location shoots like the one at the 2018 World Economic Forum (WEF) in Davos, Switzerland, to re-examine the corporation and how it is changing the world. The case: makeover of corporations as socially conscious entities. The New Corporation premiered at the 45th Toronto International Film Festival on September 13. 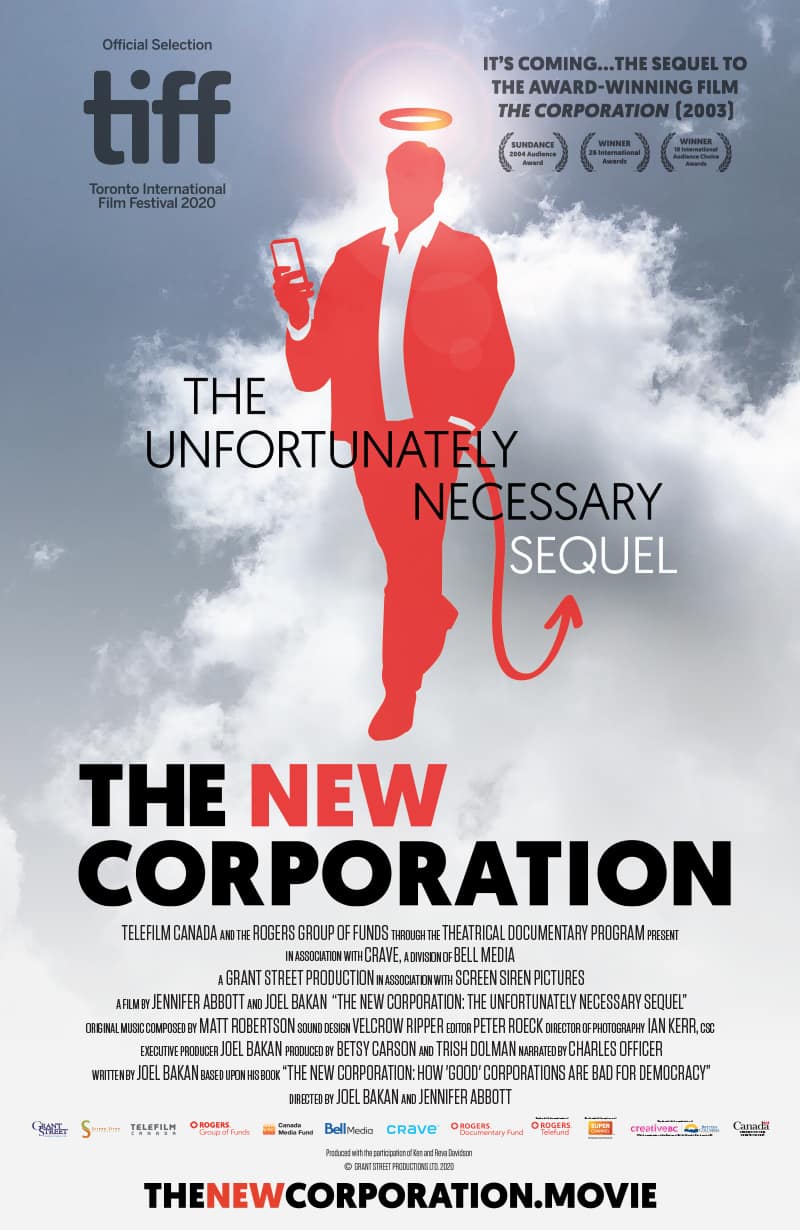 "About 2005 we started to see many of the world's biggest branded companies suddenly making very sweeping promises. Promises such as 100 percent carbon neutrality, zero waste to landfill, zero deforestation and 100 percent recycling," says Peter Dauvergne, a political scientist at the University of British Columbia, in the film. "Since that shift, corporations have mounted a charming offensive rebranding themselves, rebranding the entire capital system and evolved into something new and improved."

The man who came up with the idea of the new corporation was Klaus Schwab, founder executive chairman of WEF, who declared that the cult of shareholder value has seen its day as the narrow construct of how companies operate in society. There was now a special responsibility of combining moneymaking with social responsibility—conscientious corporations poised to make the world a better place.

Economist Robert Reich of University of California, Berkeley, sees the new corporation as a hoax. "There is no such thing as Corporate Social Responsibility. Corporations don't have the leeway to sacrifice shareholder returns to do whatever they want to do or believe is socially responsible," he says.

Anand Giridharadas, author of Winners Take All: The Elite Charade of Changing the World, explains the vicious circle: governments cut taxes, companies achieve growth, social-welfare spending goes down, companies step in and say we will help, but in our way.The targets of the new corporation are education, healthcare, transport, environment... the list goes on. The film claims the rise of big tech companies is accelerating this process.

"(Corporations) have discovered that a better strategy for them now in the age of active climate breakdown is to charm us all into believing that they are part of the solution saying that okay we are going to invest in renewables, but meanwhile we have to keep using fossil fuels for a long time," says climate activist Anjali Appadurai of non-profit environmental organisation Sierra Club BC.

It's here that the film goes for the jugular. At this point, the pandemic has forced the location shoots to give way to interviews from home. After spelling out the new corporation's strategy, the film traces the origin of mass movements in the current decade to the corporate takeover of society. Enter Vandana Shiva, Alexandria Ocasio-Cortez and Greta Thunberg.

These mass movements, the directors argue, are the peoples' demand for a new kind of democracy. One that is not a convenient marriage between the corporations and the governments. The film reels out a list of movements, from Occupy Wall Street to Arab Spring to the fight against Adani's coal mining by Australian indigenous people.

In the new kind of democracy, activists are willing to take on both corporations and governments by assuming charge of civic bodies. Progressives have seen the necessity to move to power to protect the people by combining social, economic and political justice. The film's clips here alternate between Occupy Wall Street and Black Lives Matter movements.

In Seattle, Indian-Origin Kshama Sawant, a vocal activist for raising the minimum wage, won the city council election in 2014 and won again last year. Because of Sawant's movement, Seattle became the first city in the US to adopt a 15-dollar-hour minimum wage.

In Barcelona, housing activist Ada Colau became the first woman mayor of the Spanish city in 2015 and was re-elected last year.

Produced by Telefilm Canada and the Rogers Group of Funds, The Corporation sequel comes at a time when the Covid-19 global pandemic has exacerbated poverty and inequality as witnessed in the frightening images of migrant exodus from India's streets.

Bakan and Abbot's probing camera provides unsettling images of fake CEOs and their false virtue. In 1950, the average pay of a CEO was 20 times that of a worker. In 2018, it was 270 times.

Bakan and Abbott don't have the flashy style of Michael Moore and do not camp in front of a CEO's home to make a citizen's arrest. Their use of the 1,100 clips the film's principal archival researcher gathered in over two years isn't gripping like those of Oscar-winning Asif Kapadia. Nevertheless, the Canadian directors drive home the message: Beware, greed and speculation have branched out.

(Faizal Khan curated India’s first football films festival with artist Riyas Komu at the 2011 International Film Festival of India, Goa. He was the curator of a football films programme in the Artists Cinema section of the second Kochi-Muziris Biennale in 2014.)