Beyond Ponniyin Selvan: 6 other novels by Kalki Krishnamurthy

Kalki Krishnamurthy and Ponniyin Selvan are a cult in Tamil historical fiction, read the gargantuan novel after watching Mani Ratnam's magnum opus film, but if that sounds daunting, read Kalki's other shorter novels, straddling the historical, social, and romance. Here, we list six of them

Mani Ratnam's PS-I, or Ponniyin Selvan: I, is the first film in a two-part franchise based on the eponymous Tamil historical novel by Kalki Krishnamurthy.

For being one of the longest ruling dynasties (300 BC-1279 AD) in world history, spread over southern Indian peninsula, including portions of modern-day Sri Lanka and Maldives, the space afforded to the Chozhas, aka Cholas, and their maritime empire, in our schools’ history books is abysmal. But where the limits of history (and history books) end, there births the historical novel, which is both real and imaginary, has both fact and fiction — people, events and places. The grammar belongs in the past, the diction is of today. Its scale is epic, and the world-building occurs in a specific period and setting, with a plot, theme/s, and conflict. One such historical novel would go on to change the course of Tamil historical fiction, much like how its subject, Rajaraja I (Arulmozhi Varman) — the Chozha emperor who was as great as he was kind and magnanimous — changed the course of Chozha destiny. In Ponniyin Selvan (which translates to the son of Ponni, or river Cauvery, and refers to Rajaraja I), released as a novel in five volumes, or 2,000-plus pages, in 1955, journalist, writer, freedom fighter Kalki Krishnamurthy goes back to the ninth century, to the medieval and later Chozhas. The story was first serialised, between 1950 and 1954, in his weekly Tamil magazine Kalki, which transmogrified many a kitchen-bound homemaker into avid prose readers and egged many others, who had shunned Tamil literature for English, to do ghar waapsi. For a story of historical import and gravitas, Kalki keeps the language conversational, and, thus, readily accessible.

In the introduction to the centenary edition, Kalki: Selected Stories (Penguin), in 1999, on Kalki’s birth centennial, his granddaughter and translator Gowri Ramnarayan writes: “Through these novels, serialised in weekly magazines, Kalki captured the hearts of thousands of Tamils who eagerly awaited the latest instalments. Old-timers recall reading the copies they secured on the street on their way home, before they could be grabbed by equally eager members of their families. Many others will tell you that the reading aloud of Kalki’s serials by some family elder is an abiding memory of their teenage years.” Kalki’s writings, many say, will also urge you to go see the places for yourself, in Tamil Nadu and Sri Lanka, where he sets his stories in or alludes to. Ramaswamy Krishnamurthy, who wrote under myriad pseudonyms, 13 to be precise, chose to write his major works under the pen-name of Kalki.

While Kalki’s other works have been made into films, Ponniyin Selvan remained elusive until now. Filmmaker Mani Ratnam has, at last, accomplished the gargantuan task that MGR and Kamal Haasan had set out to do, by bringing to life Kalki’s mammoth text, into two parts, the first of which, Ponniyin Selvan: I, or PS-I, just released in theatres. While the spectacular Ponniyin Selvan enjoys a greater pop-cult status, it is popular fiction and may not be great literature, and some of Kalki’s non-historical novels and short stories are equally compelling as this magnum opus. Here, we list six of his other novels, if you get hold of a translation, give them a read: 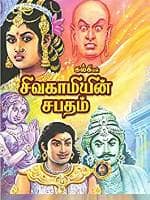 Kalki wrote three historical romances: Parthiban Kanavu, Sivagamiyin Sabatham, and Ponniyin Selvan, in that sequence. But chronologically, Sivagamiyin Sabatham, the second story/book, serialised between 1944 and 1946, can be read first, as it delineates the story of the seventh-century Pallava dynasty, during the reigns of Mahendravarman I and Narasimhavarman I, that preceded the Chozha or Chola dynasty. At the centre of this story stands Sivagami, a classical dancer, daughter of sculptor Aayanar, and Narasimha’s love interest. It’s a tale about how the love for art and architecture led Pallavas to war, with the Chalukyas.

Though written first, get to this book after reading Sivagamiyin Sabatham. Parthiban Kanavu, or Parthiban’s dream, serialised between 1941 and 1943, speaks of the endeavours of Vikraman, son of Chola king Parthiban, in the seventh century, to seek independence from the Pallava king Narasimhavarman I. This story was adapted on film in 1960, starring Gemini Ganesan and Vyjayanthimala. After this, read the final installment in Kalki’s historical novels — Ponniyin Selvan. This is a short historical novel that situates the story in the Indian independence. It juxtaposes two time periods and the tale of two couples, one historical and the other contemporary. A freedom fighter who fights the colonial British and sees his past life, in a dream, as a prince, centuries ago. The dream foreshadows and upends the reality. The audiobook is available on YouTube, but is pointless if you don’t understand Tamil.

In Mohini Theevu, which translates to fairy island, the ship carrying the narrator-protagonist Bhaskara Kavirayar, to India from Burma, during World War II, escapes a Japanese cruiser and lands up on a mysterious island, south of Sri Lanka. What unfolds on the island — a hark back to a previous era and a love story between the rivals Cholas and Pandyas, of prince Sugumaran Cholan and princess Buvanamohini — fills the pages of this short, period fiction.

Kalki’s non-historical novel, a romance novel if you will, Kalvanin Kadhali, which translates to the thief’s lover, was serialised in the Tamil weekly magazine Ananda Vikatan in 1937, and published as a book in 1954. It tells the story of two star-crossed lovers, Muthayyan and Kalyani, a dacoit and his beloved. Given its dramatic premise, the novel has since been adapted into plays and, at least, two films (one of which starred Sivaji Ganesan and P Bhanumathi). Conceived as a Gandhian novel, Kalki’s Sahitya Akademi-winning social novel, Alai Osai, or the roar of waves, serialised in 1948-49, browses the turbulent years between 1934 and 1984, till the assassination of Mahatma Gandhi, which left Kalki distraught. The satyagrahi freedom fighter Kalki went to jail for making “seditious speeches” during the Non-Cooperation Movement, and twice later. “He wrote it (Alai Osai) as a gut-wrenching tribute to the Mahatma. The novel moves from the villages of Tamil Nadu to the cities in the country and then smaller towns,” Ramnarayan told The Hindu. Alai Osai, touted as Kalki’s favourite, is considered to be Kalki’s most neglected work.