Realme just launched its X3 series in India. The two new smartphones coming to the series are the Realme X3 and Realme X3 SuperZoom. Both phones have been branded as 4G flagships with the SuperZoom debuting as the company’s first smartphone with a periscope camera.

The Realme X3 and Realme X3 SuperZoom will go on sale on June 30 on Flipkart and Realme.com. Both phones will be available for pre-order on June 27. Consumers can avail an instant 10 percent discount on the phones using HDFC Bank cards and EMI transactions.

The Realme X3 SuperZoom is powered by the Snapdragon 855+ SoC. The decision to use a last-gen flagship-grade chip over the latest premium mid-range chipset seems like a smart decision. The Snapdragon 855+ is faster than any mid-range processor from Qualcomm or MediaTek, including the Snapdragon 768G and MediaTek Dimensity 1000+. The chipset is paired with up to 12GB of RAM and up to 256GB of UFS 3.0 storage.

On the back, the X3 SuperZoom opts for a quad-camera setup with a 64-megapixel, f/1.8 sensor at the helm. The main camera sensor is paired with an 8-megapixel, f/2.3 ultrawide shooter, an 8-megapixel, f/3.7 periscope camera, and a 2-megapixel macro snapper. The periscope lens offers 5x optical zoom and 60x hybrid zoom as well as optical image stabilisation.

The Realme X3 SuperZoom has a side-mounted fingerprint reader. Connectivity options include Wi-Fi 802.11, Bluetooth 5.0, a USB Type-C port, and no headphone jack. 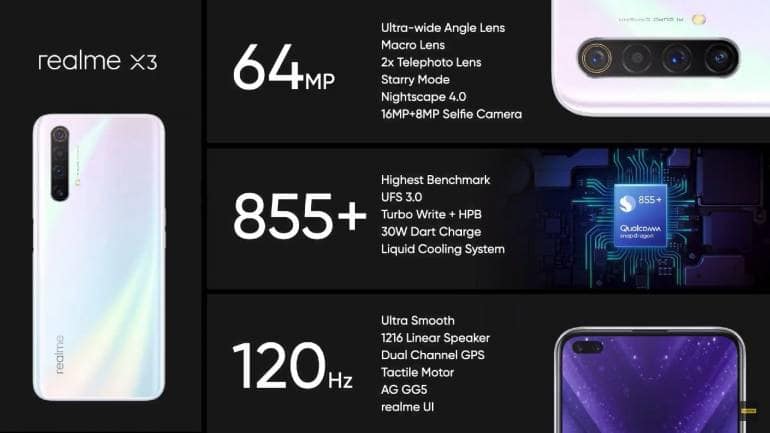 The Realme X3 is almost indistinguishable from the SuperZoom, both on the spec sheet and on the design front. The only difference here is the lack of a periscope camera. The standard Realme X3 opts for the same camera setup but replaces the periscope camera with a telephoto camera with 2x optical zoom. The standard Realme X3 also trades the 32-megapixel selfie shooter for a 16-megapixel selfie snapper. The Realme X3 is limited to 8GB of RAM and 128GB of storage.

Also Read: Realme Buds Q launched in India for Rs 1,999: Everything you need to know