The Realme Narzo 20 Pro is yet another mid-range smartphone from Realme’s stable here in India. The Narzo 20 Pro, if you keep the looks aside, is a mix of specifications that you find on the Realme 7 and the Realme 7 Pro (review) and is priced affordably.

Some of the key Narzo 20 Pro specifications include a MediaTek Helio G95, a 90Hz LCD, and a 48MP camera setup. However, the key highlight is the inclusion of a 65W fast charger for the 4,500 mAh battery on the Narzo 20 Pro. You get all of this at a starting price of Rs 14,999.

We have used the smartphone for quite a few days to find out if the Realme Narzo 20 Pro is the best smartphone under Rs 15,000 in India.

As mentioned earlier, Narzo 20 Pro is a mix of specifications that you find on the Realme 7 and the Realme 7 Pro. However, Narzo 20 Pro differentiates itself with the Victory design on the curved plastic back that throws in V-shaped lines when light falls on it. The rear panel is glossy, which also makes it prone to fingerprint smudges. We really appreciated the fact that the Realme 7 Pro (review), and even previous Narzo smartphones like the Narzo 10 (Review) came with a matte finish on the back. The plastic frame has a matte finish which houses the SIM-tray and volume buttons on the left edge, whereas the power button-cum-fingerprint scanner are located on the right edge. You will find the USB Type-C port sandwiched between the 3.5mm headphone jack and the mono speaker grille.

Realme Narzo 20 Pro weighs 191 grams and surprisingly does not feel that heavy. 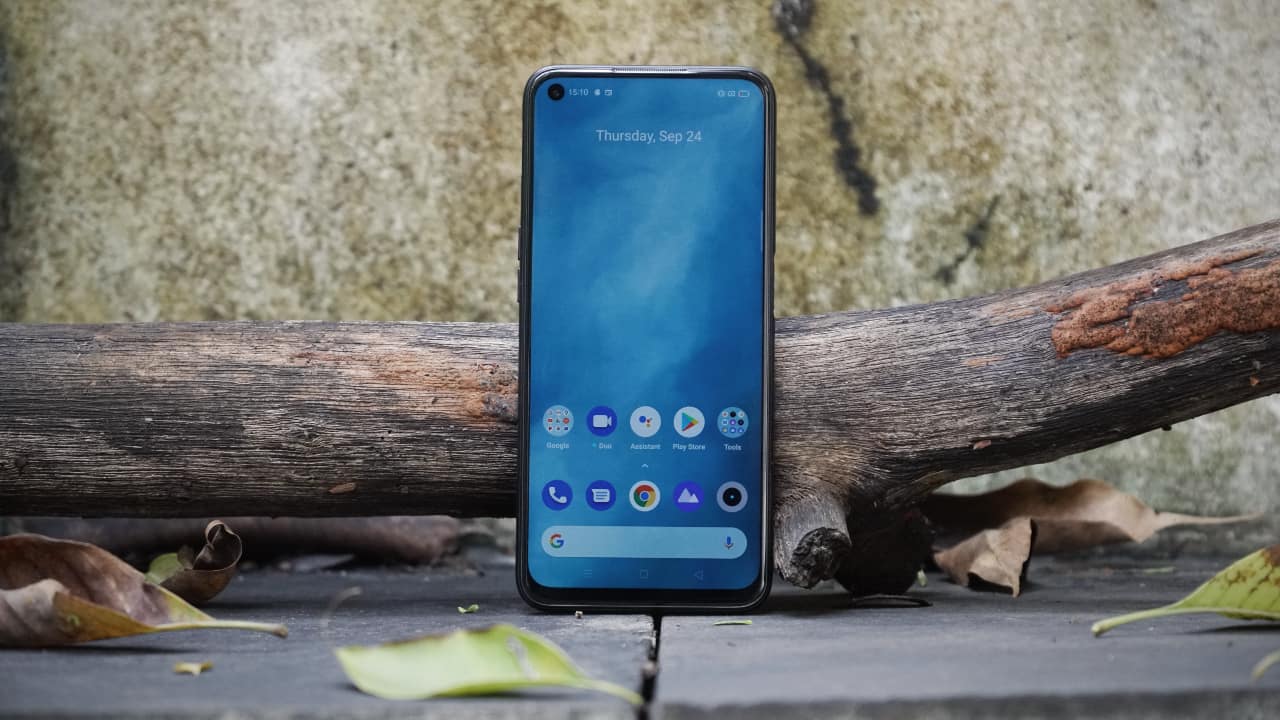 If you want a brighter display, we would highly recommend the Realme 7 Pro which has an AMOLED display but misses out on a high refresh rate support. If you are someone who streams video content on their smartphones, the brighter AMOLED display, coupled with a stereo-speaker setup on the Realme 7 Pro would be a better combination. For the ones who play games on their smartphones, the Narzo 20 Pro’s display is fast and just bright-enough.

By the way, we did notice slight colour bleeding around the hole-punch cutout on the upper left corner at times.

Realme Narzo 20 Pro shares the same performance unit as the Realme 7. There is a MediaTek Helio G95 processor, which gains a marginal performance boost over the Helio G90T processor. During our Realme Narzo 20 Pro review period, we performed basic tasks like scrolling through Twitter and Instagram, streaming episodes of The 100 and Suits on Netflix, and also played some graphics-heavy games like Call of Duty Mobile.

We did not notice any major performance issues while playing games or even multi-tasking during our Realme Narzo 20 Pro review period. The phone did get slightly warm after like 35-minutes of CoD Mobile but wasn’t something alarming. Apps too did not freeze or close when we left them in the background.

The Realme UI based on Android 10, comes with minimum yet essential pre-installed third-party apps, apart from Realme’s own list of apps. You will also see a bunch of more apps that Realme recommends while setting up the device, which you can choose to skip or install later. We are quite happy that the Realme UI operating system has evolved to the point where it offers necessary additional features over stock Android that improve the user experience without being resource hungry. 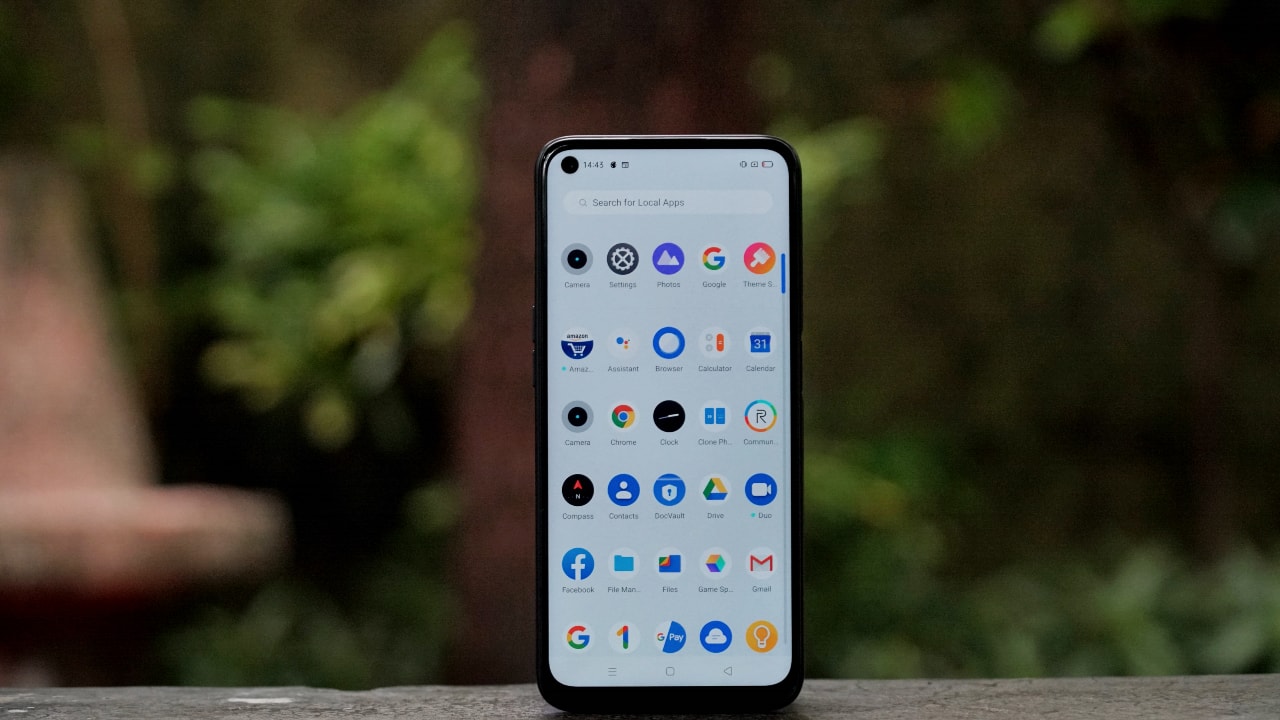 This, in return, helps devices like the Narzo 20 Pro offer better battery life. The 4,500 mAh battery managed to give us between five to six hours of screen-on time during days when we played CoD Mobile for a couple of hours. The phone can easily give you a better SoT if you have a medium use case. Even if you the Realme Narzo 20 Pro runs out of juice, the blazing-fast 65W fast charger can charge the phone from zero to 100 percent in 35 minutes.

Credit where it is due, Realme has taken a lead in democratising super-fast charging with its 65W Super DART charging, first with the Realme 7 Pro (Review), and now the Realme Narzo 20 Pro.

This is the one area, we feel, where the Realme Narzo 20 Pro lags behind the Realme 7. The budget smartphone under Rs 15,000 has four camera sensors on the back, with a 48MP primary sensor at the helm. The other three camera sensors include an 8MP ultrawide lens, a 2MP black and white lens, and a 2MP macro lens. If you can recall, the camera setup is the same as the Realme Narzo 10 (Review). Shots taken using the primary camera are detailed but the colours are a bit too oversaturated for our liking - The greens and reds particularly. The primary camera’s performance in low light is as good as satisfactory. You will notice some noise and lack of details, especially in the shadows. There is a dedicated night mode but it does not bring a whole lot of improvement when it comes to dealing with noise.

The 8MP 119-degree ultra-wide camera offers a similar colour temperature as the primary camera. There is some amount of barrel distortion along the edges but that’s common across most smartphones with an ultra-wide camera. The macro camera is functional-enough to shoot close up shots of subjects but do not expect sharp details, thanks to the 2MP’s 1600*1200 resolution. The 16MP front camera is housed inside a punch-hole cutout. Realme smartphones tend to click good quality selfies and the Narzo 20 Pro is no different. Disable the beauty modes and you will get close-to-real selfies with ample detail when there’s good light. Edge detection in portrait shots is fairly good but the bokeh was very aggressive and looked very artificial. Take a look at the Flickr slideshow below to see all the photos shot on Realme Narzo 20 Pro. 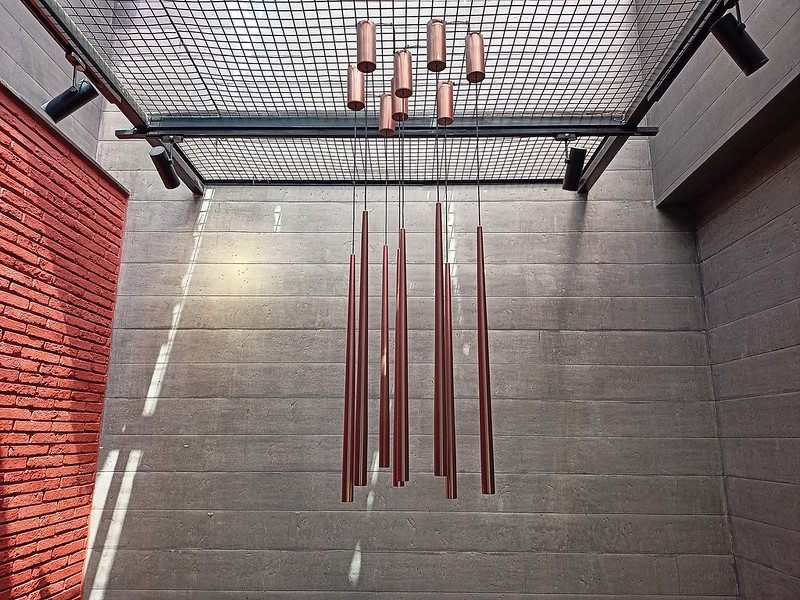 Coming to the main question: Is the Realme Narzo 20 Pro the best smartphone under Rs 15,000 in India?

If you have Rs 15,000 to spend on a smartphone, we would recommend picking the Realme 7 over the Narzo 20 Pro as it offers better camera performance without compromising on the other areas. The Narzo 20 Pro would be a primary pick among the two only if we want to experience the 65W fast-charging.

There are a plethora of smartphones available under Rs 15,000 and Rs 20,000 in India. Other than the Realme 7 Pro, no other smartphone under Rs 20,000 offers the 65W fast charging experience. The Narzo 20 Pro makes this even more affordable with its Rs 14,999 price tag.

Watch out for our Poco X3 review coming up soon on our website. The smartphone, which is priced at Rs 16,999, offers good value with its specifications on-paper.
Pranav Hegde
Tags: #Realme #smartphones
first published: Sep 26, 2020 07:41 pm