Oppo F19 Pro Review: A versatile mid-ranger held back by a lacklustre chipset

Oppo recently launched the F19 Pro and F19 Pro+ in India. The two smartphones are nearly identical, primarily separated by their different chipsets. Our focus today is on the Oppo F19 Pro, the successor to the F17 Pro. With a starting price of Rs 21,490, the Oppo F19 Pro is well-positioned in India’s mid-range market. However, its price tag also puts it within reach of several 5G-enabled smartphones, more notably the Mi 10i and Realme X7. But all things considered, let’s find out if the Oppo F19 Pro can hold its own in India’s highly competitive mid-range market.

In terms of design, the Oppo F19 Pro looks slick, it is quite slim at around 7.8mm and weighs little above 170 grams. Despite the plastic build, the phone looks pretty good and the major reason for that is the textured matte finish, which has a nice glossy shine. If there’s one complaint here it is that the surface is a bit too smooth and can be slippery. The frame on the slide has a glossy plastic finish and unlike the back panel, is prone to smudges. 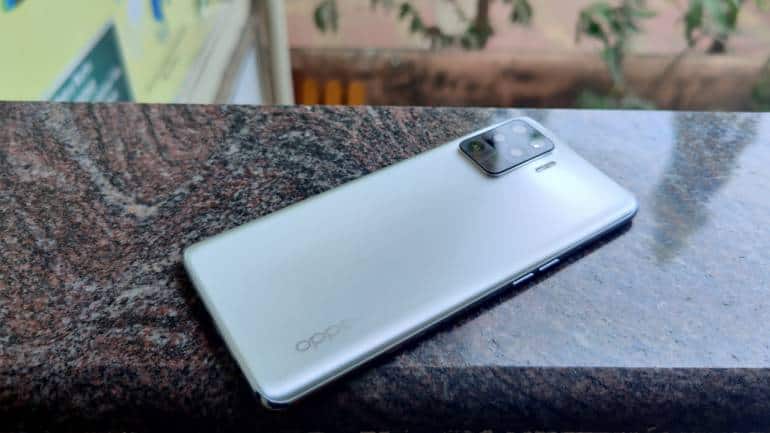 However, there’s a case in the box that can tackle both the issue of smudges and the slippery back panel. Additionally, Oppo also includes a charging brick and a pair of headphones in the box. The phone has volume buttons on the left and a power button on the right. The SIM card tray sits right above the volume buttons and features a triple card slot, enabling dedicated storage expansion. On the bottom, there’s a speaker grille and headphone jack. Overall, the design and build feel pretty solid and look good while doing so.

On the front, the F19 Pro opts for a 6.43-inch FHD+ Super AMOLED panel. The screen’s Widevine L1 support will enable you to watch HDR content on video streaming platforms. When it comes to viewing angles and colour accuracy, we’d give the display top marks in the segment. Brightness was another strong suit of this display. The big caveat here is the 60Hz refresh rate. In an age, where high refresh rate displays are gaining popularity, 60Hz seems a little underwhelming.

For performance, the F19 Pro retains the MediaTek Helio P95 as its predecessor. The chipset is paired with 8GB of RAM and up to 256GB of storage. The MediaTek chip is more than capable of handling everyday tasks smoothly without much effort. I didn’t experience any inconvenience while multitasking. In Geekbench 5, the chip managed to score 400 points in the single-core test and 1586 points in the multi-core test. In AnTuTu, the F19 Pro managed an overall score of 199104 points. It is worth noting that these scores fall short of Realme, Redmi, Samsung, and Motorola smartphones in the same segment. Gaming performance was less than ideal, with frame rates in Call of Duty: Mobile dropping after 30 minutes. The phone also felt a little toasty after the first 30 minutes of non-stop gaming. Overall, performance on the F19 Pro seems a little underwhelming, especially if you look at what the competition is offering.

For optics, the F19 Pro gets a quad-camera setup with a 48 MP, f/1.7 sensor at the helm. The other three camera sensors include an 8 MP ultrawide lens, a 2 MP macro unit, and a 2 MP mono camera. On the front, the hole cutout notch houses a 16 MP selfie camera. The 48 MP camera can record video in 4K or 1080p resolution at 30fps, while the front camera is limited to 1080p video at 30fps. The phone also supports different modes including AI Color Portrait Video, Dual-View Video, and Dynamic Bokeh to name a few. The main camera on the F19 Pro works well in most lighting scenarios. The sensor captures a good amount of detail with little to no noise or distortion. Colours are well represented for the most part but can turn out a bit too punchy at times, appearing oversaturated. If you are just looking for social media photos, then the F19 Pro will get the job done with flying colours. Photos also tend to have a wide dynamic range and detailed shadows.

In low light, the night mode ensures images look sharp, but objects in the background often tend to lack detail. Night mode photos are mainly contingent on the amount of ambient light in a scene. The F19 Pro’s ultrawide also does a decent job in bright light but struggles in low light. The macro camera here is a hit and a miss, getting good shots depends on how steady the subject is and the light. And even then, it doesn’t always get things right. 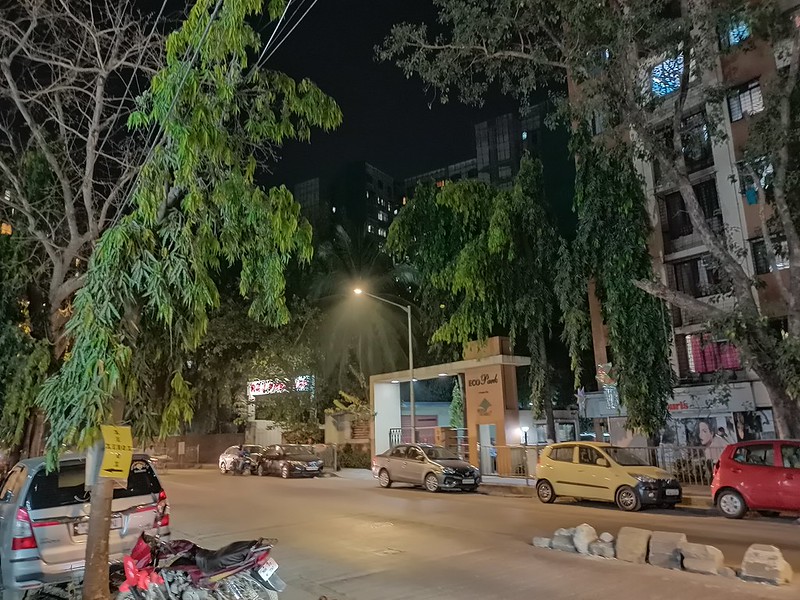 The F19 Pro also captures good videos in 4K resolution with well-represented colours and nice details. You also get a ton of different video modes that makes the experience more fun. Selfies look pretty good in outdoor light with realistic colours and a good amount of sharpness, so long as you don’t zoom in. There was some aggressive softening going on with the AI beauty mode, but apart from that, the selfie camera did a decent job in well-lit scenes. On balance, the cameras on the F19 Pro are pretty versatile, I’d say they’re marginally short of class-leading in the segment.

The F19 Pro’s 4,310 mAh battery is far from the biggest in the segment but can easily survive a full day. If you aren’t doing CPU and GPU intensive tasks, then expect a day and a half or more of battery life. You also get a 30W charging adapter bundled in the box that can power up the phone in a little over an hour. I’d say overall battery life is good, not great, just good. The Oppo F19 Pro runs Android 11 based on ColorOS 11.1 out-of-the-box. ColorOS is not the cleanest of software skins, there’s a fair bit of pre-installed in-house and third-party apps, some of which can be uninstalled. Even so, ColorOS has come along way, the overall user interface feels fluid and responsive. There’s a ton of customisation options, a game mode, an always-on display, and more. Sure, ColorOS can do with some cleaning up, but the user experience is excellent to the point where it can be rated as one of the top third-party software skins for Android. 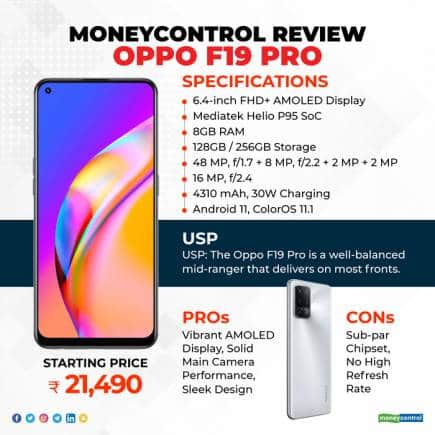 The Oppo F19 Pro is a really good smartphone, it has everything you’d want in a mid-range phone. It has a decent chipset, a versatile set of cameras, a vibrant display, an all-day battery, fast-charging, and good software. There’s not a lot to complain about if you are looking at the F19 Pro in a vacuum. But when pitted against the competition, the F19 Pro does seem to be lacking. I’d say its weakest aspect is the chipset, which is arguably the worst in this category. I just don’t feel Oppo has done enough to distinguish F19 Pro from the F17 Pro, at least on the inside. If I had to sum it up, I’d say the Oppo F19 Pro is a well-balanced smartphone that’s held back by a sub-par chipset.
Moneycontrol News
Tags: #Oppo #smartphones
first published: Mar 22, 2021 02:13 pm