Apple macOS Big Sur is coming to Macs this fall: Here is everything you need to know

Big Sur sees the operating system receive one of the most comprehensive transformations since the release of macOS X.

One of the biggest developments from WWDC 2020 was the announcement of macOS Big Sur, the latest edition of Apple’s PC operating system. The Cupertino-based tech giant bumped the version number up from macOS 10.15 Catalina to macOS 11.0 Big Sur, named after a mountainous region in coastal California. The new release brings with it a new UI and major changes to some of the key apps. Big Sur sees the operating system receive one of the most comprehensive transformations since the release of macOS X.

First up is a new Control Center, which looks and feels similar to that on iOS. The customizable Control Center can be used for quick access to Wi-Fi, Bluetooth, and AirDrop controls, keyboard brightness, Dark Mode, and more. Additionally, the new Notification Center can now be used by clicking the clock in the corner. The Notification Center has been redesigned with more interactive notifications grouped by app and iOS 14-style widgets.

Windows on macOS Big Sur have a lighter appearance, giving the interface a cleaner look. The Dock is more translucent, while app icons have a new uniform shape. Menu bars in apps have also been redesigned, and the system sounds have seen a major revamp. Lastly, new symbols in toolbars, sidebars, and control have been added to offer clarity and uniformity across apps. Safari gets a new start page on macOS Big Sur with customizable background images and sections like iCloud Tabs and Reading List. Apple has redesigned tabs to make navigation in Safari faster by displaying more tabs onscreen with page previews on hover and ability to close a group of tabs at once. Users can also choose when and which site can access a Safari extension.

Overall, Safari has also become faster and more power-efficient than ever. Apple claims up to 50 percent faster performance than frequently visited websites on Chrome and up to 3 hours more battery life while streaming videos as well as longer hours of web browsing as compared to Firefox and Chrome. Privacy Report now lets you know which trackers Safari is blocking when you visit websites. Additionally, an in-built translation tool can translate an entire webpage from seven languages. The browser can also check and inform users if a saved password is involved in a data breach. Messages on macOS Big Sur is now based on the Messages app for iOS and bares a lot of similarities with iOS 14. Popular features like @mentions, inline replies, pinned conversations, and more. Users can also access message effects like balloons and confetti on Mac, while the app also supports Memoji creation and Memogji stickers. Search for the Messages app has also received an overhaul to make it easier to locate photos, links, and match terms. A new photo picker can be used to find pictures by keywords.

Apple redesigned the Maps app for macOS Big Sur, adding support for Look Around, indoor maps, and Guides, which are lists of notable attractions, restaurants, and more created by trusted sources. Maps for macOS can be used to generate cycling and electric vehicle trips that can be sent to iPhone, and shared ETA updates can now be viewed on the Mac. The story with Maps is no different from Messages, much of the same features from iOS 14 has been transferred to macOS Big Sur. Maps on macOS now supports Look Around, Guides, and indoor maps. Cycling and EV trips can now be routed on a Mac and sent directly to your iPhone.

HomeKit Secure Video cameras now supports Activity Zones and Face Recognition. Siri has been updated to answer a much wider range of questions, while AirPods have better automatic device switching. Apple Music has a new Listen Now section that houses personalized playlists, interviews, and new releases. The Photos app gets expanded editing capabilities courtesy of the new Retouch tool that is powered by machine learning. 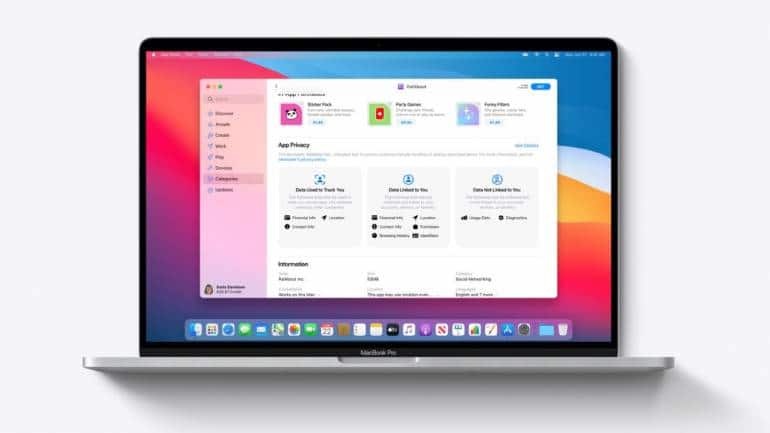 In a major win for transparency, the Mac App Store will inform users about all the data collected by developers before they install an app. Other new features include Family Sharing support for apps with subscriptions, an option to assign reminders in the Reminders app, improved performance for Spotlight, and quick style edition and improved search in Notes, among others.

Finally, Apple announced a shift from Intel processors to its custom ARM-based Silicon. The company outlined Universal 2, Virtualization, and Rosetta 2 as three of the most important features for developers to make the transition. Universal 2 will allow developers to build or recompile apps to run on Intel and ARM-based Macs. Virtualization will enable developers to run other operating systems within macOS, which means apps from iPadOS and iOS will be able to run directly on the Mac. Rosetta 2 will help run x86 based apps on the upcoming ARM-based Macs. macOS Big Sur will be coming later this year in fall.