The Ola electric scooter is yet to be fitted with all of its advertised features and many software updates are pending. Still, it has the potential to be a world-class product

The S1 Pro has a lean, taut look with no visible panel gaps, an excellent paint finish and a wide berth that makes it practical for all.

The “Ola” logo may be very familiar on cabs, but seeing it emblazoned atop a sleek-looking electric scooter takes some getting used to. This even though the Ola electric scooter has been anticipated for the better part of a year.

After logistical delays and many inquisitive phone calls, the Ola S1 was made available for an extensive ride on what turned out to be an unusually damp evening in Bengaluru, where the company is based.

There is a catch. The models handed out for review were not finished products but almost production-ready versions running a beta version of Ola’s in-house software. Varun Dubey, chief marketing officer of Ola Electric Mobility, says that, unlike regular scooters, the Ola S1 and the Ola S1 Pro will only get better with timely over-the-air updates to fine-tune and optimise the software. Make no mistake: this is about as software heavy as a scooter has ever been.

Certain key features advertised earlier are still a few updates away, including the hill hold feature (making it easier to start from a stationary position on a slope without rolling back), voice-activated commands, remote unlocking through an app on a phone, playing music through the speakers, and visual moods that alter the sound and layout of the instrument cluster.

Plenty remains to be fine-tuned, along with heat management and battery optimisation. According to Dubey, these updates will be available via a simple download by the time the first batch of customers takes delivery of the scooters later this month.

Leaving us with the question: has Ola Electric got the broad strokes right? It’s finally time to address the big questions surrounding this much-hyped product. The models handed out for review were not finished products but almost production-ready versions running a beta version of Ola’s in-house software.

Ola Electric must be commended for its design execution. The S1 Pro has a lean, taut look with no visible panel gaps, an excellent paint finish and a wide berth that makes it practical for all. It’s a clean, fuss-free design, with a range of colours making it stand out anywhere. With regular scooter designs reaching the point of appearing grotesque, the S1 and S1 Pro’s neo-retro, clean-cut looks come across as fresh.

The headlamp unit is mounted where it should be – above the fairing and between the handlebars. Riding around in the evening allowed it to show off its prowess via round daytime running lamps encased within a square LED border. The throw of the headlamps, for my money, was better than what a regular scooter is capable of providing as of today. The rubber-mounted grab handles seemed unusual, given the electric powertrain’s vibration-free nature. But for Ola Electric, it’s better safe than sorry.

The 7-inch touchscreen system is slick and tactile, responding well, even in the pouring rain. If there’s one element that needs looking into, it’s a backlight for the button panels on either side of the handles. They all feel the same when you’re fumbling around in the dark, trying to power-up the scooter.

Arguably, the S1’s performance credentials are meant to set it apart from the multitude of e-scooters mushrooming across the Startupverse. Ola has long claimed that the S1 Pro is the best-performing e-scooter in the world. It gets a 3.98 kWh battery that’s 1 kWh larger than the S1’s. With the larger battery, the S1 Pro gets an additional riding mode dubbed “Hyper” where the battery unleashes the full extent of its kinetic might.

To keep the futuristic quotient high, Ola has chosen to make the S1 series of scooters operable without a physical key fob. Buyers can instead create a six-digit code to unlock the scooter, priming it for a button-operated starting function that begins with a clear aural note emanating from the scooter’s speakers. Buyers can also lock and unlock the scooter through an app. 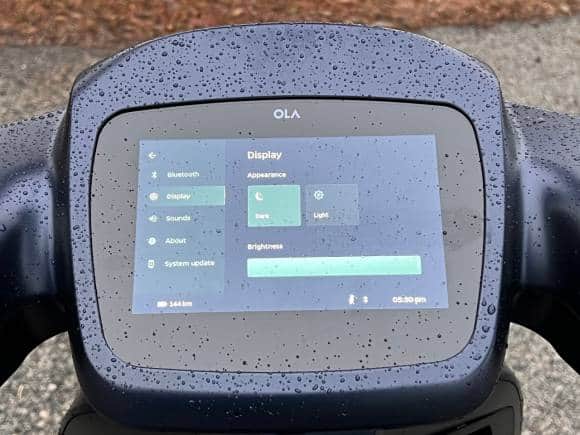 Plenty remains to be fine-tuned, along with heat management and battery optimisation.

Squeezing both the brakes and pressing the power button turns on the juice after which it’s a simple twist of the throttle that gets the S1 Pro moving. The odometer on the touchscreen shows a range of 182 km, which is halved as soon as I opt for the “Hyper” mode.

The ascent to 60 kph is startlingly quick and while I didn’t quite hit top speed due to spatial constraints, it doesn’t take much to imagine how quickly it can get there.

“Sport” mode gets you a bit more range than “Normal.” It’s the sweet spot between “Hyper” and “Normal,” allowing for zesty performance while salvaging a few more km from the overall range. When it comes to performance, the S1 Pro is a pretty straightforward, point-and-shoot device that seems otherworldly to most scooterists, if not all motorcyclists.

On the gravelly, rain-soaked tarmac, there was only so much confidence the S1 Pro inspired around corners. Tapping the brakes cuts off the power completely and is inadvisable mid-corners. But on the whole, the scooter feels light and easy to manoeuvre.

There’s a lot that helps differentiate the S1 Pro, not only from regular scooters, but other e-scooters. A simple forward twist of the throttle allows you to reverse the scooter, after having pressed the reverse button on the left-hand side panel. 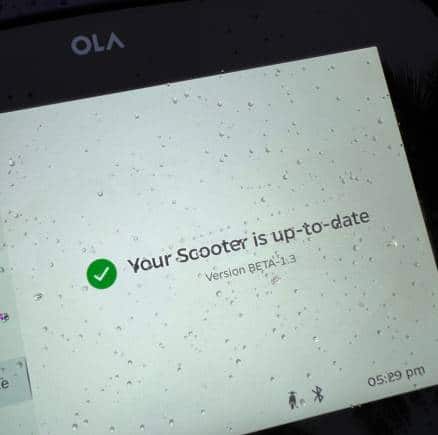 The Ola S1 Pro continues to be a work in progress and until all the features are available and tested, superlative verdicts will be put on hold.

The Ola Electric Smartphone app, which is yet to arrive as an update, allows the user to toggle through multiple profiles aimed to facilitate family usage. Riders get to enable a parental mode that can set a speed limit and monitor the movement of the scooter via an in-built Jio SIM (yet to be activated at the time of the review).

Many of the novel features are yet to be activated. This includes the visual “moods” that can modify the touchscreen panel to provide a retro or futuristic interface, complete with sounds to accompany the visual theme. The hill hold feature remains to be activated, along with a Jio SIM card that allows you to stream music that can be played on the scooter’s speakers.

While a proper range-based test is yet to be performed, I reckon the real-world range of the S1 Pro, in “Normal” riding mode, would be 130-140 km, based on the readings during my 15 km test run. In the “Hyper” mode, a 4 km run managed to drop a good 12 km (conservative) from the overall range, with the odometer going to 80 km from 92 km fairly quickly. However, determining the range will be better once all the battery optimisation updates are installed.

The Ola S1 Pro continues to be a work in progress and until all the features are available and tested, superlative verdicts will be put on hold. It has the ingredients to be a truly world-class product and in terms of performance and features, it blows the regular scooters out of the water, almost immediately. It’s battery placement is fairly low, the weight distribution seems optimal and despite a heavier kerb weight than rival e-scooters, the Ola S1 Pro manages to feel quite nimble and light. The aural notes emanating from the fascia-mounted speakers are crisp yet unintrusive, and the brakes pack plenty of bite. 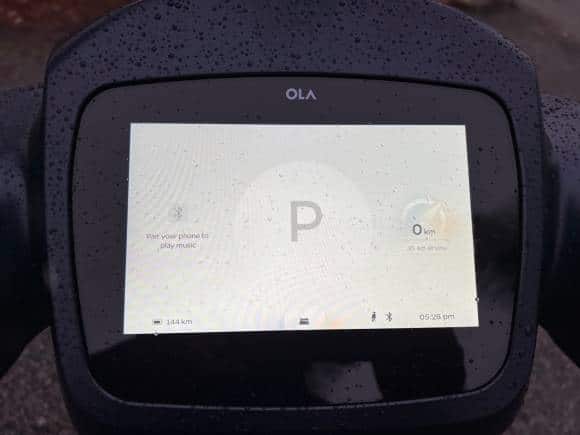 With regular scooter designs reaching the point of appearing grotesque, the S1 and S1 Pro’s neo-retro, clean-cut looks come across as fresh.

The beta software needs a lot of work and there’s something to be said about providing a finished product for test rides instead of one with pending updates. Ola has made it clear that all future updates have been bought and paid for already and that any data consumed through the in-built SIM, be it for SatNav or music streaming, will be for free.

What works in favour of the scooter, apart from outright speed, is the raw potential it’s brimming with. At present, it’s coasting on novelty value alone. Its true test lies in how well it navigates the notorious Indian terrain. With all the creases ironed out, Ola Electric should rightly find itself the custodian of a game changer.

Looks great in any colour

Switch panel needs to be backlit