New Land Rover Defender 2020 review: Does it live up to its name?

Can a boulder-bashing off-road tool make for a good everyday SUV? The answer lies somewhere between the new Land Rover Defender’s enormous wheelbase.

When it comes to the automotive world, it’s not practice but provenance that makes perfect. This is particularly applicable to the Land Rover Defender, having stayed in continuous production for nearly seven decades.

Until they decided that the car world’s most famous rectangle was to be laid to rest, giving way to a slightly less rectangular and all-new Defender that’s just the right amount of derivative. It has to be, since its predecessor cast a tall shadow.

Over the decades, the Defender has been everything from a lifeline to a weekend tool. It’s hard-boiled nature made it a hit with off-roading enthusiasts; but as a family carrier, there were always other Land Rovers to be sought.

The new Land Rover Defender 110 (One-Ten) arrives in India bearing a price tag of Rs 79.94 lakh, going all the way up to Rs 89.94 lakh. This is by no means a sum which will be spent purely to meet off-roading requirements, which means, the new Defender will have to pass certain tests as an everyday carrier of people. Lots of people.

Because while it may not have a fireplace, it is the size of a Georgian villa. And considerably more robust. Purists may disagree, but the new Defender pays homage to the old one, while still being its own car. The edges are rounded off, but designer Gerry McGovern has ensured that this is easily identifiable as a Defender. And those massive wheel wells, tailgate-mounted spare wheel and short overhangs mean it can be nothing else.

Climb into the Defender, and things get a lot more contemporary. This isn’t like any other car cabin you’ve been in. The materials, the design – everything has a faux military vibe to it, with a mild space-age quality thrown in for good measure. The steering wheel looks like something fitted into a lunar module. The gear lever is placed next to the steering, below the infotainment unit, and the cabin is a collection of contours meant to store all manner of life-saving equipment. A large bag of crisps, for example. The touchscreen unit allows easy access to Land Rover’s R&D wizardry – an area where they beat every off-roading brand. Terrain Response System 2, differential locks, energy consumption – everything can be monitored via a clinical interface on the screen.

The Defender comes to India in P300 guise only. Which means this two tonne behemoth is powered by a modest 2.0-litre petrol engine, making a not-so-modest 296hp. You’d think the relatively pedestrian motor would strain to carry such a bulky vehicle. To my utter surprise, the Defender felt quick. And being quick isn’t necessarily a requirement. 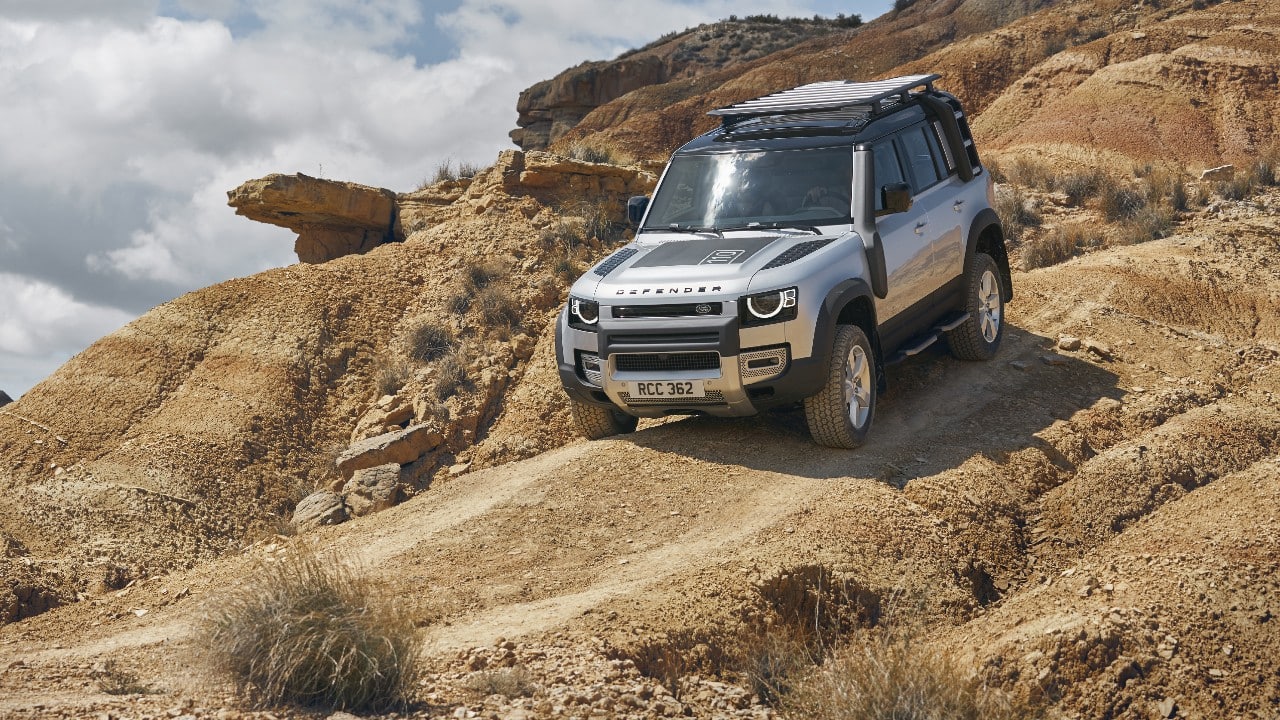 Something to do with the lightweight materials, and its monocoque chassis, but this square-faced asteroid actually develops the momentum of one, fairly quickly. The eight-speed ZF gearbox does throw in a bit of lag, when you floor the throttle, and the engine needs to be revved hard to get up to proper speeds. But the eagerness with which it does it is astonishing. Aerodynamics are about as good as you can expect from something shaped like a big metallic fist so there’s a fair bit of buffeting at high speeds.

Off the trodden path

Admittedly, I didn’t venture too far off the tarmac, in the Defender. While this would be the case with most buyers of the Defender, I did fiddle around with the fantastic off-road tech that’s on offer. The SE variant comes with electronic air suspension as standard, and that alone might justify buying the Defender, because it takes zero cognizance of the treacherous terrain we’re assaulted with on a daily basis. 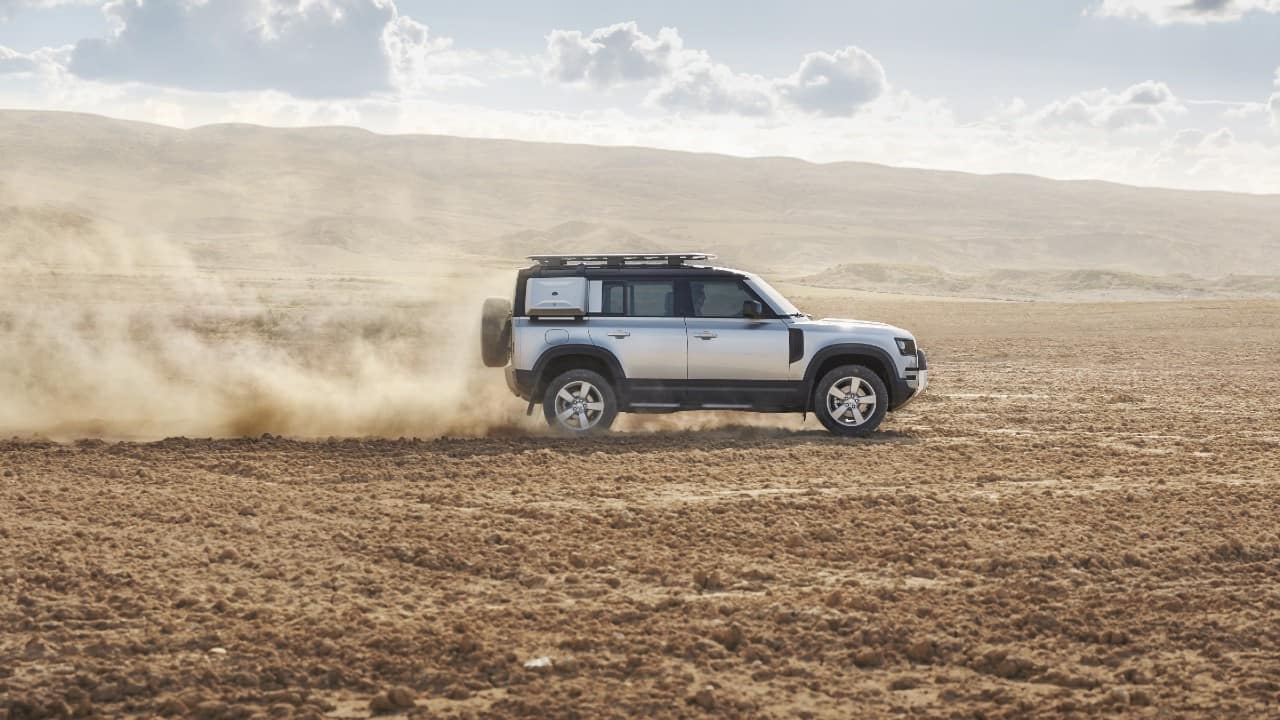 It really does float like a butterfly. If that butterfly were stuck to the windshield of a massive Land Rover. In off-road mode, it even lifts up to give you a total ground clearance of 291mm. It’s this daily grind that’ll prove far more tedious for the Defender than any amount of rigorous rock-crawling. It seems like it’ll quite enjoy the latter. The other factor that makes the Defender exceptional, are the brakes. It’s an oft overlooked aspect when determining a vehicle’s everyday appeal, but the brakes on this thing can stop a locomotive.

The rest of the kit’s fantastic. Rear locking differential with torque vectoring giving optimum traction. A low-ratio transfer case and the best electronic terrain configuration in the business. The Defender can automatically select a terrain mode, or you perform the dauntingly-tricky act of selecting it yourself. Setting it to “Automatic'' allows the Defender to configure the suspension, differential and throttle response for you. There’s also a nifty little tow bar, that can be engaged or disengaged through a tap on the 4K touchscreen. In its ability to do everything well, the five-door Defender remains peerless. Are there SUVs which are more luxurious? Of course. Are there equally or more rugged off-roaders out there? Certainly. But the Landie brings not just pedigree to the table, but a sense of wholesomeness that few vehicles possess.

Its hulking presence on the road, somehow doesn’t seem obtrusive. There’s a level of space and functionality here, that simply isn’t there in most soft or off-roaders. It’s this mix of utility, comfort mixed with an air of invincibility that makes the Defender tick. It’s more on-road capable than hardcore off-roaders, and possibly one of the greatest off-roaders that don’t feel the need to compromise on everyday comfort. For Rs 89 lakh a pop, that seems like plenty to go with.
Parth Charan is a Mumbai-based writer who’s written extensively on cars for over seven years.
Tags: #Auto #Land Rover Defender #Technology
first published: Dec 29, 2020 09:17 am