Asus has officially taken the lid off the ROG Phone 5 series globally. The smartphone maker has decided to add three new devices to the ROG lineup, namely the ROG Phone 5, ROG Phone 5 Pro, and ROG Phone 5 Ultimate. It is worth noting that sets apart these three devices is the RAM, storage variations, finish and backlighting.

Apart from this, the AreoAtive Cooler 5 is bundled with the Pro and Ultimate versions.

The Asus ROG Phone 5 is powered by the Snapdragon 888 SoC. It is paired with 12GB of LPDDR5 RAM. The ROG Phone 5 Pro and Ultimate take things up a notch with 16GB and 18GB of RAM, respectively. The standard ROG Phone 5 also boasts 256GB of storage, while the other two models come with 512GB of storage. However, there’s no microSD card slot for expansion. 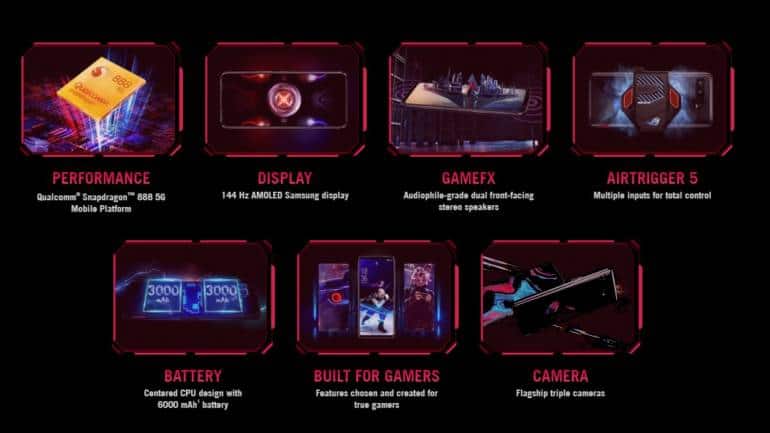 The ROG Phone 5 packs a 6,000 mAh MMT Dual cell battery, which allows for better cooling of the motherboard and battery while it is being charged. Speaking of charging, Asus also included a 65W adapter in the box. The phone has two USB-C ports, one on the bottom and one on the side to enable you to game comfortably while the device is being charged. On the optics side, the ROG Phone 5 gets the same triple-camera setup on the back just as its predecessor.  The phone has the same 64 MP Quad Bayer Sony IMX686 sensor with an f/1.8 aperture. The 13 MP ultrawide and 5 MP macro cameras have also been retained. On the front, the top bezel houses a 24 MP, f/2.45 selfie shooter. The main camera can record video in 8K resolution at 30fps and 4K resolution at 60fps.