The demand for smartwatches and fitness trackers has been on the rise in India. Over the past couple of years, people have shown a keen interest in buying fitness wearables. Reasons for it could vary as some might want a smartwatch for keeping a track of their health goals, while others may simply want it because wearing a smartwatch is trendy. Whatever the reason may be, modern-day smartwatches offer features that fit almost every use case.

When it comes to the most popular smartwatches, Apple Watch is a definite mention. The company recently unveiled the Apple Watch Series 6 with a Blood Oxygen sensing and a bunch of other features. However, Series 6 is a premium offering and starts at Rs 40,900. And let’s be honest, not everyone would be willing to spend that amount on a smartwatch. To make the Apple Watch more affordable for the masses, Apple launched the Apple Watch SE.

Apple Watch SE is more-or-less like the latest Watch Series 6. The Watch SE sports the same design elements as the Series 6, but misses out on a few features. Are these missing features a deal-breaker? Or is the Apple Watch SE a better value-for-money smartwatch? I have used the Apple Watch SE for exactly 10 days to answer these questions and more. Here is our Apple Watch SE review.

Before we begin our review, please note that you need an iPhone to pair your Apple Watch SE (or any other Apple Watch for that matter). Now that the key requirement is in place, let’s begin with our Apple Watch SE review, starting with the design and display.

With the Watch SE, Apple has stuck with the tried-and-tested square-shaped design with a curved outline, similar to what we have been seeing since Series 4. And that’s not a problem at all, cause why fix something that’s not broken? 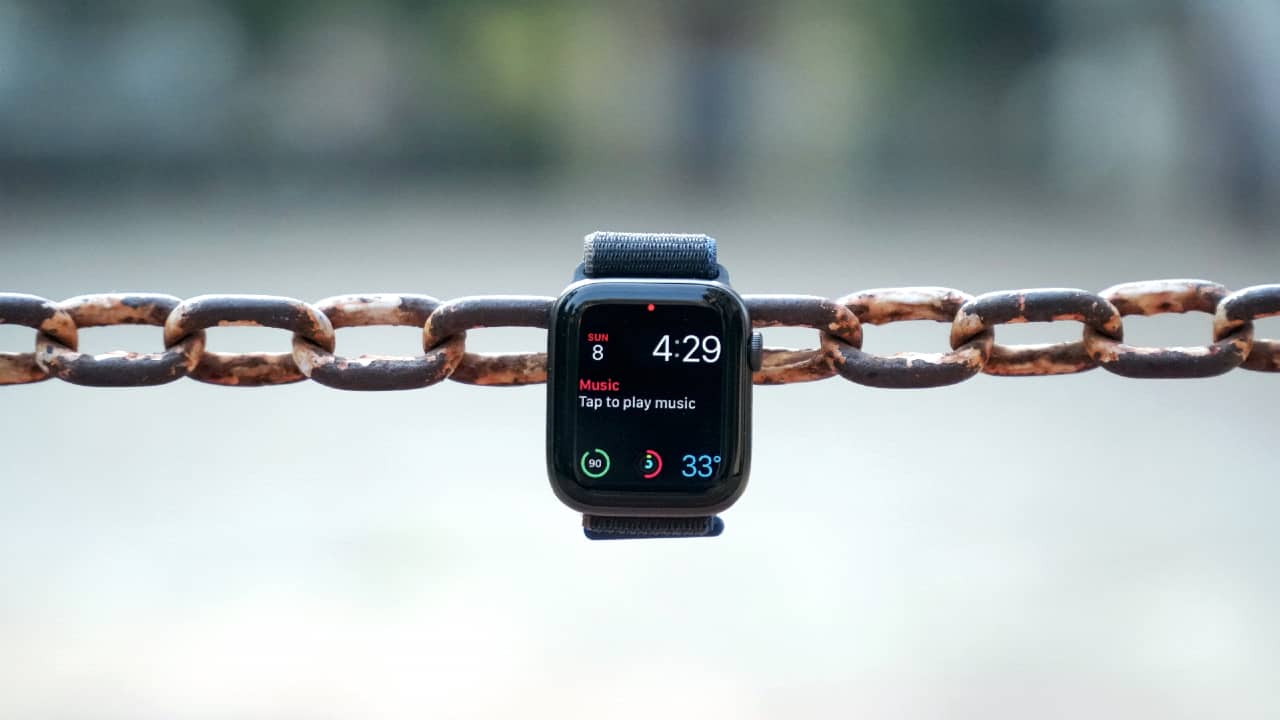 The OLED display, which is more than just bright, curves smoothly around the edges. It misses out on the always-on display feature that you get on Series 5 and Series 6. However, the raise to wake function works right almost every time. The only time I missed the always-on display feature was when I was cycling or running and the screen did not lit up sometimes when I raised my wrist. More on the workout modes and features later in this Apple Watch SE review.

I used the Watch SE in all possible lighting conditions - from pitch dark to super bright light at 12 noon here in Mumbai. The ambient sensor adjusts to the brightness levels accurately and the text size, by default, is also large enough to read on my 44mm variant. As for the ones who want a smaller watch, Apple also offers the Watch SE in a 40mm size. You also get three colours to choose from for the aluminium body - silver, space gray, and gold.

Coming to the screen's durability. If you, like me, are clumsy enough to hit your watch here and there, then let me tell you that the Watch SE has a strong glass on top. I, accidentally, hit the Watch more than a couple of times on hard surfaces, and to my good luck, it did not break or scratch.

.@Apple Watch SE’s display is strong! A friend’s dog tried to bite the watch when it was on charge. Put it in his mouth and Watch fell flat on screen (roughly 4 ft drop). No scratches/ cracks at all!

This does NOT mean that you try this. The incident was purely accidental. pic.twitter.com/chqD32ORtd

Apple Watch SE features a circular crown that can be used to scroll through the list of Watch faces. You can also press it once to check the list of apps installed on your Watch, for long-press it to invoke Siri. Below the crown is another pill-shaped button that can be used to invoke the multitasking window that lists out the recently-opened apps. The same key can be long-pressed and used as a power button. On the underside (the part which faces the wrist), there is a circular heart-rate sensor that bulges out slightly over the surface. You’ll see the sensor lit up in green every time it monitors your heart-rate. The Heart Rate app on the Watch lets you check the current and resting rate. Additionally, the Health app on the iPhone also shows your minimum to maximum heart rate throughout the day.

While we are at the features, let’s jump into the Watch OS features you get on the Apple Watch SE.

During the initial part of this review, we said the Apple Watch SE is more-or-less like the latest Watch Series 6. While the Watch SE is more like Series 6 in terms of design, Apple has cut a few features from the Watch SE like the Blood Oxygen reading and ElectroCardiogram, popularly known as ECG.

The Watch SE is a lot more than the two missing features. For starters, there’s the hand-washing feature introduced in watchOS 7 that uses the inbuilt microphone and motion sensors to see if you are washing your hands properly for 20 seconds, as per the guidelines laid down by the World Health Organisation (WHO). Once the Watch detects that you are washing hands, it will start a 20-second timer. If it detects that you have not washed your hands for the advised 20 seconds, it throws a message on the screen.

watchOS 7 also introduces Sleep tracking on Apple Watch, which uses the inbuilt accelerometer to track your movements while you are asleep. Apple states that the feature is capable of differentiating between your sleeping and waking states. watchOS 7 also comes with a bedtime mode that disables all your notifications 30 minutes before your set bedtime.

There is also Fall Detection that is by default enabled for the ones who are 65 years and above. Others need to enable the feature in the Watch app on your iPhone. Fall detection feature sends a message alert to the user’s emergency contacts and also contacts emergency services if it has detected a fall and the person is not moving for a certain amount of time. You can enable any of the available workout modes via the workout app on your Apple Watch to achieve your daily workout goals.

An excellent feature that can get annoying during those lazy days is the reminder of finishing your workout for the day. Apple Watch will notify and remind you to complete your exercise rings and standing for 12 hours at least. You can also challenge your friends and start a weekly challenge to see who achieves their workout goals during the week.

All of this and your activity data can be checked in the Fitness app, which was formerly known as the Activity app.

While fitness should be a priority in everyone’s lives, there needs to be a cut-off period to take a break during the week. There could be times wherein one would not want to workout and simply rest after a tiring day at work. The Watch, during such days, should let the user disable the workout notifications.

Apple Watch SE, on a full single charge, will give you an average battery life of close to 40-45 hours on a single charge. This feels much better from my Series 3 Apple Watch, which after three years of use started dying within a day and a half. You could credit the S5 chip for the better and efficient battery life or the absence of the always-on display feature.

To refuel the battery using the magnetic cable, Watch SE takes close to two hours. I typically charge the watch overnight. If you are someone who sleeps while wearing their Apple Watch, you might want to charge it in between routine every day.

The good thing about Apple Watch is that several apps support it. You could choose an alternate third-party app instead of the native ones from the App Store.

If you have a pair of AirPods and an Apple Music subscription, you could simply leave your iPhone at home wear the Watch SE, and go for a run. One of the benefits of being a part of the ecosystem is that the Watch can be used to perform some of your tasks without lifting your iPhone. Replying to texts, answering a call, checking notifications, switching to the next or previous track, adjusting the volume, etc., can be done simply by tapping on the screen on your wrist.

Coming to the main question? Should you buy the Apple Watch SE?

Apple Watch SE brings some of the best Apple Watch Series 6 features at a starting price of Rs 29,900. The watch, by no means, feels like an affordable variant and is built with premium quality materials.

We would certainly recommend the Watch SE to the ones who are upgrading from Series 3 or older Watch models. You get a slightly bigger screen in the same form factor for your existing loops and watch bands.

Apple Watch SE is a smartwatch for the masses who use an iPhone and want a premium experience.

With the Apple Watch, you are also bound to get a couple of major software updates, if not more. This means that the software features that Apple introduces every year at its annual developer conference are likely to be available on your Watch SE.

With the set of health and fitness features and top-notch build quality for the price, Apple Watch SE is likely to be one of the most popular smartwatches of the year.
Pranav Hegde
TAGS: #Apple #Apple Watch #smartwatches
first published: Nov 8, 2020 08:08 pm