Round Two: Former IAS officer Shah Faesal 'excited to start all over again' amid speculation of return as bureaucrat

Faesal, who topped the UPSC examination in 2009, resigned from services in January 2019, citing “rising intolerance” in the country. He had later floated his own political party — Jammu and Kashmir People’s Movement — with plans of contesting assembly elections, but he quit politics in August 2020, and started dropping hints of making a comeback in civil services

Former IAS officer Shah Faesal, the first UPSC topper from Jammu and Kashmir, has hinted at his return as a bureaucrat, three years after he resigned from the government service.

Faesal, who had resigned from service in January 2019 citing “rising intolerance” in the country, is awaiting orders of posting in General Administration Department (GAD) of J&K, according to sources.

The government has accepted his application for withdrawing his resignation and reinstated him in service and his next posting would be announced soon, Home Ministry officials were quoted as saying by news agency PTI.

Earlier on Wednesday night, in a series of tweets, Faesal, 38 indicated his return to the government services, though there was no official confirmation. Faesal, who had floated a political party after resigning from the services, spoke about how idealism had let him down back in 2019.

“Eight months of my life (Jan 2019-Aug 2019) created so much baggage that I was almost finished. While chasing a chimera, I lost almost everything that I had built over the years. Job. Friends. Reputation. Public goodwill. But I never lost hope. My idealism had let me down,” Faesal tweeted.

8 months of my life (Jan 2019-Aug 2019) created so much baggage that I was almost finished.
While chasing a chimera, I lost almost everything that I had built over the years. Job. Friends. Reputation. Public goodwill.
But I never lost hope.
My idealism had let me down. 1/3

Faesal, who topped the UPSC examination in 2009, had served in various capacities as Director Education Kashmir and the managing director of the Jammu and Kashmir Power Development Corporation during his stint as a bureaucrat.

“But I had faith in myself. That I would undo the mistakes I had made. That life would give me another chance. A part of me is exhausted with the memory of those 8 months and wants to erase that legacy. Much of it is already gone. Time will mop off the rest In believe,” he said in the tweet. Later he told MoneyControl that the series of tweets were nothing more than 'just a note to self'.

Faesal did not spell out what is next for him, but speculation has been rife here over the past one year that he might return to government service either as an IAS officer or in some advisory role to the Lieutenant Governor of Jammu and Kashmir. Sources said he is “awaiting” orders of posting in the General Administration Department of Jammu and Kashmir. 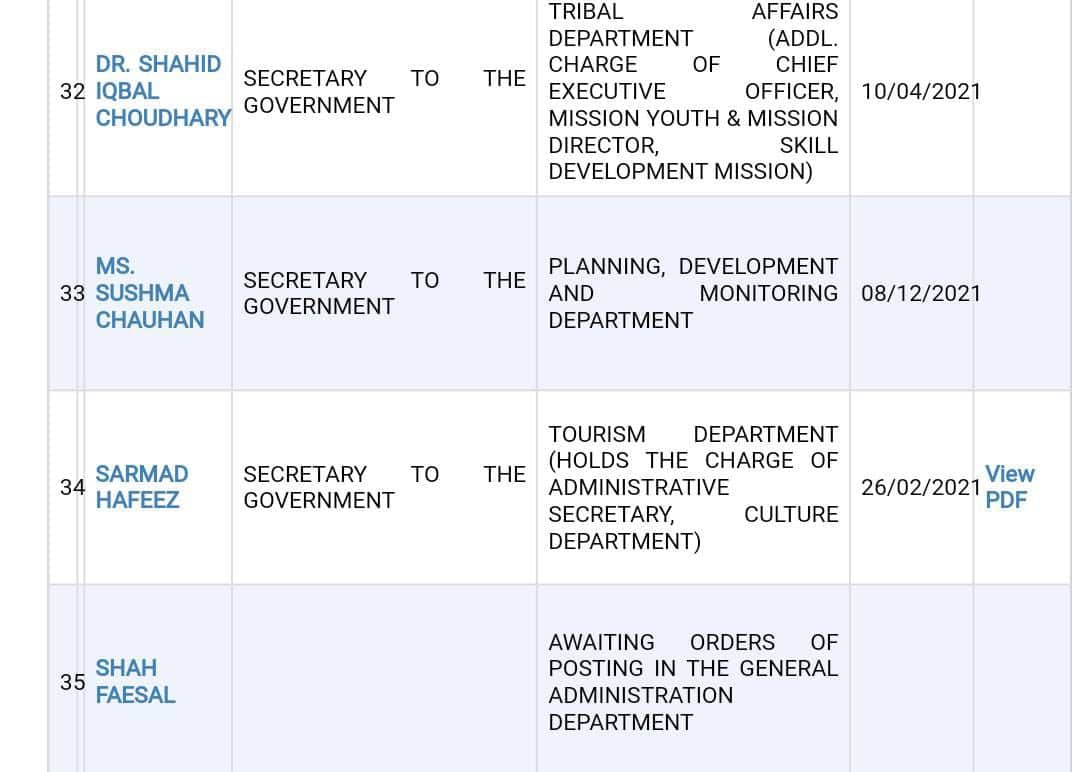 Faesal, 38 is “awaiting” orders of posting in the General Administration Department of Jammu and Kashmir, according to the sources.

“Just thought of sharing that life is beautiful. It is always worth giving ourselves another chance. Setbacks make us stronger. And there is an amazing world beyond the shadows of the past. I turn 39 next month. And I’m really excited to start all over again,” he wrote.

Sources said his resignation was not accepted by the government in the first place and he has already been inducted in the GAD. The posting may be announced soon, a source said.

The Home Ministry, which is the cadre controlling authority for the Arunachal Pradesh-Goa-Mizoram and Union Territory (AGMUT) cadre, had asked for an opinion of the J&K administration about his plea for withdrawal of resignation, the PTI report said.

After resigning from services in 2019, Faesal had floated his own political party — Jammu and Kashmir People’s Movement — with plans of contesting assembly elections which were not held anyway. The UT has been under Centre’s rule imposed in 2018 following the collapse of the coalition government headed by People’s Democratic Party’s (PDP) Mehbooba Mufti after the ally Bhartiya Janata Party (BJP) withdrew its support.

Of late, Faesal, who had earlier been critical of BJP government at the Centre, has turned into an ardent supporter, on the social media, of Central government policies. He has been often sharing speeches of Prime Minister Narendra Modi and Home Minister Amit Shah on his Twitter handle.

Born in Lolab area of Kupwara in north Kashmir, Faesal became first candidate from Kashmir to top civil service exam in 2009. Before cracking the prestigious exam, Faesal was gold medalist at Srinagar's Sher-i-Kashmir Institute of Medical Sciences (SKIMS), where he studied medicine.  In 2002, Faisal was 19 when his father  Ghulam Rasool Shah,  a teacher, was allegedly killed by militants.