A 23% increase in the number of matches - from 60 to 74 matches - plus higher ad rates compared to last season equals higher ad earnings for broadcasters.

Indian Premier League (IPL) 2022 has started in Mumbai in a much bigger avatar, and brands are leaving no stone unturned to ride on the popularity of the cricket league. With two new teams Lucknow Super Giants and Gujarat Titans, the 15th edition of the IPL has 10 teams fighting it out for the coveted T20 trophy.

More teams equals a longer season, with the number of matches increasing 23 percent from 60 to 74. Hence, there is an inflation in ad rates compared to last season, said media buyers. According to industry estimates, the official broadcaster of the league Disney Star is charging Rs 13-14 lakh for 10-second ad slots while the finale might fetch a premium as well - in 2021, TV ad rates were around Rs 10-12 lakh for 10-second spots. The broadcaster is expected to corner over Rs 3,000 crore worth of ad revenues from this season, both from TV and Disney + Hotstar. 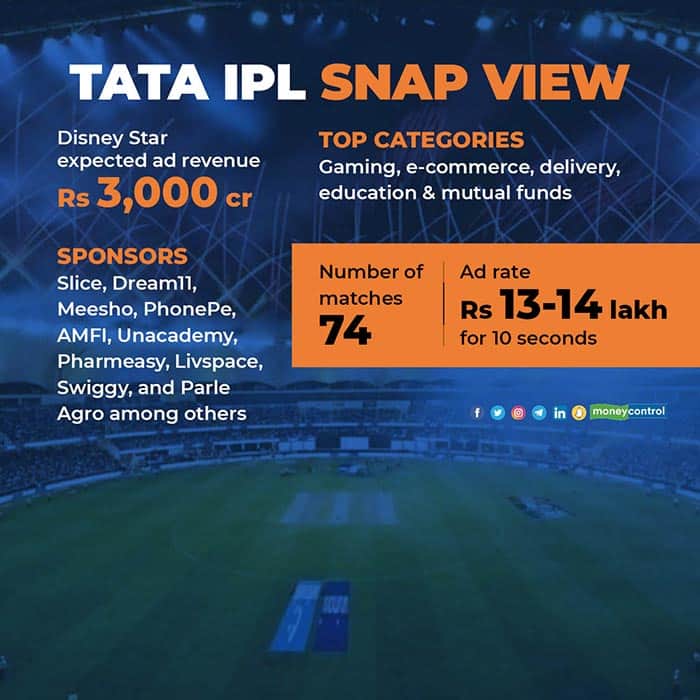 “This year IPL 2022 will do better than last year because the tournament is happening in India with new teams and new captains,” he notes.

Venkatasubramanian adds that like the previous editions, IPL 2022 will be dominated by gaming, e-commerce, delivery, education, mutual funds categories.

“Tata is the biggest brand this year, as they are launching the TataNeu app this year through IPL 2022. Spotify (music category) is also an interesting entrant this year,” he says.

Internet commerce company Meesho, for instance, is a new IPL sponsor this year. The company  announced its partnership with four teams and will be the official online shopping partner for the five-time champion Mumbai Indians, Royal Challengers Bangalore, Rajasthan Royals, and Gujarat Titans.

Lucky Saini, vice-president and head of brand, Meesho, tells Storyboard18 that the partnership will help reach out to the value shopper across India.

“What better way to create awareness about this than through mass India's most loved and watched sports league. IPL also helps maximise our reach amongst the men shoppers as it has a higher inclination towards male viewers," he notes. 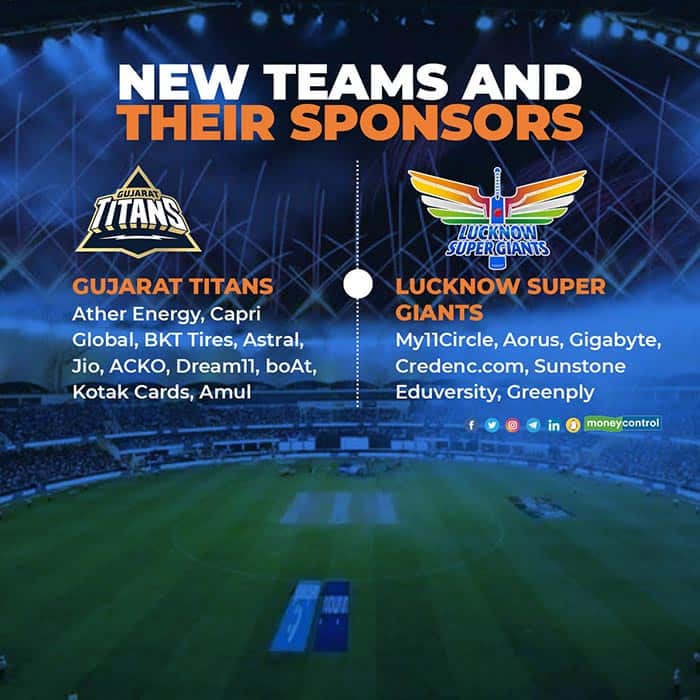 “The composition of the teams have changed with players being dispersed into different teams. Additionally we have two new team franchises which are bound to attract advertiser interest,” says Dinesh Singh Rathore, CEO, Madison Omega.

Manoj Tulsian, JMD & CEO, Greenply Industries Ltd, tells Storyboard18 that the association will create a positive impact amongst the company's Uttar Pradesh (UP) audience through  digital and social media content. The company has plans to launch a team song to connect with UP pride and an online game for their trade and influencer partners to engage during the tournament.

“This current association with Lucknow Super Giants is more of long term and comes with a very high impact on-ground visibility during franchise matches along with an opportunity to build high level of engagement with each and every stake holder of the business. We will invest around 25% of the advertising budget on building this association in the next four years,” he notes.

“Our sponsorship pool has a strong combination of established Indian brands, start-ups and global giants that we have built long-term partnerships with. We are a preferred franchise for global brands, with TeamViewer joining us this year and we have had long-term associations with DHL, Marriott Bonvoy and Cadbury Dairy Milk. Slice has joined us as principal sponsor for three years in the biggest IPL deal ever,” says a Mumbai Indians spokesperson.

As restrictions ease across the country and consumption picks up, brands are placing their bets high on the country’s most loved sports to connect with consumers. If the track record of IPL is any benchmark, then their marketing efforts are expected to pay rich dividends.

Saumya Tewari is Assistant Editor of Storyboard. Storyboard is Network18's flagship platform focussed on the advertising & marketing community and a leading source of news and analyses on the business of brands.
Tags: #Advertisers #IPL 2022 #IPL ads #IPL sponsor #Storyboard18
first published: Mar 30, 2022 10:26 am