Look back at the iconic Indian ad featuring nude figures of Madhu Sapre and Milind Soman locked in embrace with a python draped around their torsos.

The Tuffs shoes advertising campaign was shot by Prabuddha Dasgupta with models Madhu Sapre (above) and Milind Soman.

Bollywood star Ranveer Singh hit the headlines recently. Social media was set ablaze when his recent photo shoot in the buff went viral. The ensuing protests on grounds of obscenity and outrage brought to forefront timeless questions. What is a work of art? The answer to which could be: to see beauty in art is indeed in the eyes of the beholder. But what is the fine line between creativity and obscenity?

Such questions sometimes get reflected in controversial Indian advertising. The 1995 advertising campaign of Tuffs shoes brought to limelight these issues too.

Phoenix International, the owner of Tuffs shoes, was a small, largely unknown sports shoe company. It had extra export shoe stock that it needed to sell in the Indian market; the same Indian market where it would face competition from large well established brands like Reebok and Action. It had to be noticed and seem desirable enough for customers to consider it.

A visit by the team from Ambience to the company’s shoe factory revealed that the sneakers were great looking. Now, the only issue was that the budget for the advertising was not sufficient for a television campaign. So, a decision was made to run with print advertising.

Elsie Nanji of Ambience remembered the stunning black and white photographs shot by the late American photographers Herb Ritts and Robert Mapplethorpe. Their style was to shoot models in beautiful backgrounds as if they were sculptures. This style was an inspiration for the Tuffs shoes advertising campaign. Prabuddha Dasgupta was familiar with this photography style and was to shoot the print ads. It was decided to have a print campaign with six print advertisements.

Phoenix manufactured sports shoes, which were sturdy. The ad campaign needed to project a sense of fashion, with an attitude. The baseline for Tuffs shoes was “Hardwear for Feet”. Elsie and Prabuddha wanted models for the campaign who had athletic personalities. Madhu Sapre and Milind Soman seemed like a perfect fit. Madhu Sapre was a national-level discus thrower and Milind Soman was a national-level swimmer. They displayed an athletic personality and brought a spirit of strength to the ad campaign. That they looked good together in the photographs was certainly a plus. After taking some photos, Prabuddha commented that the duo looked great together and asked whether they would shoot in the buff. The two had no issues.

Shooting photographs for the advertising campaign began. For one advertisement, Milind Soman was smeared with plaster of paris (POP), and crouched on an ornate pedestal, wearing only Tuffs shoes. Milind resembled a classic statue in all its muscular glory.

In another ad, Madhu Sapre is photographed in beachwear aiming a discus while wearing Tuffs shoes. The black and white photo emphasizing her strength and athletic physique.

One advertisement though made history. The black and white advertisement showed the glamorous models, Milind and Madhu, in an embrace, flaunting only Tuffs shoes. A large python was draped around their torsos. 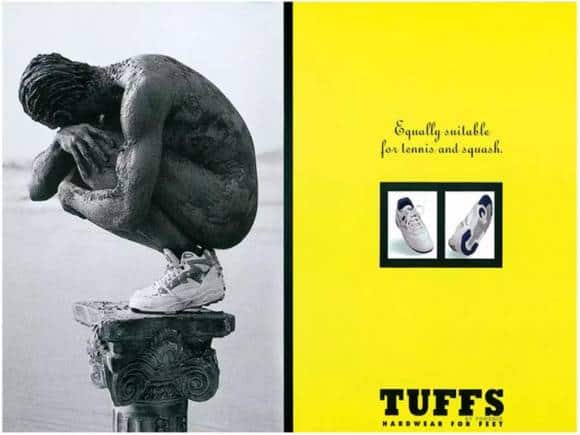 Milind Soman and Madhu Sapre appeared in the buff for a series of six photos for Tuffs shoes.

Phoenix was delighted with the campaign. Tuffs shoes had been shown as being sporty and making a bold statement. The advertising succeeded in cutting through the clutter of other brands and made Tuffs shoes salient in the minds of people. It delivered results that exceeded expectations.

Soon after the release of the print advertisement, many raised their eyebrows in disbelief at the models in buff and the “obscenity” of the ad. The ad went down in Indian advertising history as one of the most controversial ads.

There were many complaints filed. It was only in 2009 that the case against the models, among others, was dismissed.

Many years later, Tuffs shoes is no more but its advertising campaign still figures as a landmark in Indian advertising history.

The recent controversy in which Ranveer Singh is embroiled, and the earlier Tuffs shoes advertising showcase the social limits of creativity. Artistic license is rooted in human emotion and values and varies through the ages and in different societies. To try to balance societal values with creativity is an ongoing challenge in all art forms, and in many human endeavours.
S. Vejay Anand consults with organizations on business strategy and marketing. He has also been an entrepreneur in the food and pet care spaces. Earlier, he was President at Coffee Day and COO at USPL. Views expressed are personal.
Subodh Tagare is an associate professor at IMT Nagpur, where he teaches courses on marketing. Prior to IMT, Subodh was the marketing director at American Power Conversion/ Schneider Electric for South Asia. Views expressed are personal.
Tags: #Elsie Nanji of Ambience #Prabuddha Dasgupta #Quantum Brief #Storyboard18 #Tuff shoes #tuffs shoes
first published: Jul 30, 2022 12:39 pm