RBI’s notice to many fintechs on June 20 is pushing fast-growing fintechs to pull breaks and reconsider their core business offerings.

In a letter to fintechs on June 20 RBI said that loading of credit lines into prepaid payment instruments (PPIs) such as wallets and prepaid cards is not permitted.

"I think the RBI is in a civil war. One faction talks about innovation and inclusion. Another faction works hard to undermine this. This circular makes no sense to me at all."

"They seem to have decided to close fintech companies in India. One blow coming after the other."

These were just some of the messages being exchanged between founders of fintechs in India on WhatsApp groups on the evening of June 20th, minutes after a letter by the Reserve Bank of India (RBI) threatened to endanger their very existence. In a missive that went out to many startups in the evening, the RBI said that loading credit lines into prepaid payment instruments (PPIs) such as wallets and prepaid cards is not permitted.

What seemed like a routine Monday swiftly turned into an existential crisis for many Indian fintechs. RBI reminded these entities that a prepaid instrument can only be loaded using cash, a bank account debit, or a proper debit or credit card, and other PPIs and ‘other payment instruments issued by regulated entities’.

It was just a two-paragraph-long clarification, but words so potent that it threatened to junk the business model of a number of fintechs that have seen tremendous growth over the past year. Apart from unicorns like Slice, others like Uni, PayU owned LazyPay, KreditBee, extend loans through prepaid cards which are issued by their partner banks including SBM Bank India, RBL Bank, among others.

Many of these fintechs have grown in size and visibility and have managed to become well-known brands in the past year. They have actors as brand ambassadors, are even IPL sponsors and have raised millions in funding. This clarification potentially puts a question mark on all of this, some industry insiders say.

What is the confusion?

The clarification, viewed by Moneycontrol, was addressed to "All Authorised Non-bank Prepaid Payment Instrument (PPI) Issuers."

At first glance, it looks like these players are safe because prepaid cards under their branding are issued by their partner banks. However, the loan itself comes from non-banking financial companies (NBFCs) in most instances, and the customer can avail of it through a bank-issued prepaid card. That is what the RBI may be against.

Secondly, as the communication said that norms don’t allow for credit lines to be loaded in PPIs at all, it puts a question on the overall model, even if the prepaid instrument is issued by a bank.

What’s worrying is none of this has been explicitly stated. So, what are the fintechs supposed to do? A few have already stopped issuing cards or will soon pull the plug.

A senior executive of one of the impacted fintechs said, “My sense is all PPI regardless of who issues it will get affected now or very soon. This is a concern. We will have to stop issuing cards very soon until there is more clarity.” 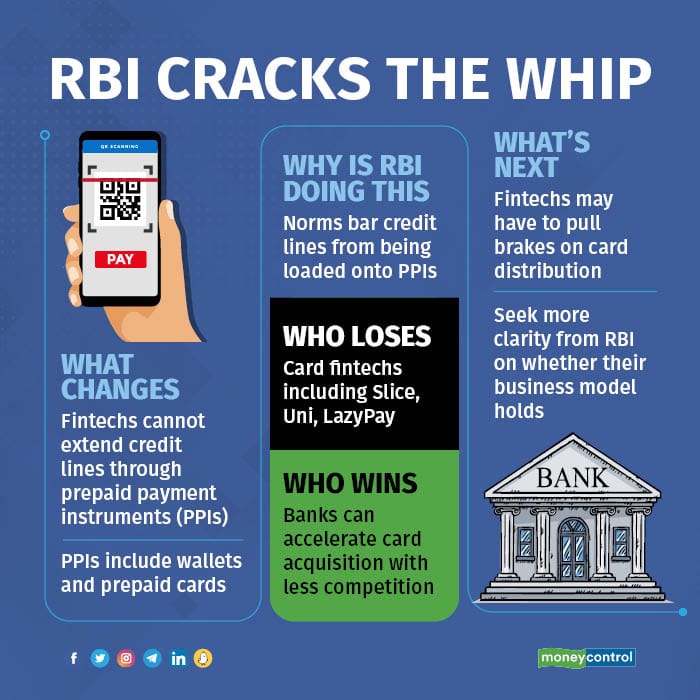 Over the past few months, multiple instructions have come from the RBI. On the one hand, RBI aims to be a friend of the fintechs, working hand in hand and consulting with them to release a set of guidelines on digital lending. These guidelines are being worked on by the newly formed fintech department within the RBI.

On the other hand, clarifications or changes in guidelines like these are aimed at one set of players – those facilitating loans to be used through a card form factor.

On April 21, RBI released new norms for co-branded cards as part of the Master Direction on debit and credit cards, a document that consolidates instructions on rules and regulations.

The Master Direction limited the role of co-branding entities to marketing and distribution of credit or pre-paid cards, casting a shadow on the viability of the business models of these fintechs. The changes which are set to come into effect on July 1 also said that the co-branding partner shall not have access to information relating to transactions undertaken through the card.

“The signals from RBI have to be looked at in totality, despite separate communications. What is unclear is that there no reasons assigned. If you say this is wrong and hence we are stopping it, it makes it clear,” said the founder mentioned above.

How the industry reacted

The central bank has left all fintechs confused with its cryptic wording. These budding startups are now looking for answers (and some even a workaround) on whether this means that they need to stop their core offering altogether and go back to the drawing board.

While founders wondered why the RBI was dealing a deathly blow,  Amrish Rau, the CEO of Pine Labs, tweeted suggesting that this was another move to ensure that fintechs remain dependent on banks.

Already reeling from a slowdown in funding, upending the key product offering, marketing and branding is going to be a question of survival with many risking losing customers in the process.

A fintech founder remarked, “If it actually means what we fear, the move will impact 10-15 million customers who currently use these products.”

But banks have been long concerned about the spurt in the growth of these companies, especially that of Slice which had been adding 200,000 to 300,000 per month, at par with leading credit card issuers like HDFC Bank and ICICI Bank.

“These banks have been wanting to know what Slice is doing to achieve such numbers. They have been a worried month after month with their disbursal numbers,” said a source on the condition of anonymity.

A day after this clarification by the RBI, Macquarie said in a note, “We believe this regulation could significantly impact the fintechs involved in this business and would be advantageous to banks, as they can further accelerate card acquisition with less competition.”

In a direct impact, the stock of SBI cards closed higher by 6.78 percent in trade on June 21.

The move by some is also being seen as expected. Over the past few months, RBI has been more cautious of card issuing fintechs as compared to other lending or Buy Now Pay Later (BNPL) players who extend credit independent of any prepaid instruments.

Customers too had been misunderstanding these products, taking them to be a credit card. In fact, this is a personal loan being linked to a card, a fact that came as a shock to many customers leading to many complaints on social media against these fintechs. Fintechs on the other hand claim to be transparent about the product.

On this, the note by Macquarie said, “The main purpose of a PPI license is to act as a payment instrument and not as a credit instrument, and we believe many fintechs were using this as a channel to load credit.”

“We also believe many customers were unknowingly taking a line of credit through their wallets at the point of check-out. Some of these practices have not gone down well with the regulator, in our view.”

While many of these players grew aggressively in a high liquidity-low interest rate scenario, many believe RBI sees these models as a systemic risk with agreements such as First Loan Default Guarantee (FLDG) in the picture under which fintechs agree to compensate lending partners to a certain extent in case of a default.

That said, fintechs too seem to have done their due diligence before launching these products.

“It's not like these entities have just gone ahead and done what they want. They've had someone advising them. This is the destruction of value and trust, how will customers trust these brands now,” said a founder quoted above.

In a legal opinion dated February 11, 2022, former Chief Justice of India VN Khare concluded that lending through PPIs can be allowed, and many players have banked on this. The opinion was sought by one of the card players, according to sources.

The legal opinion document as seen by Moneycontrol mentions players including OlaMoney Postpaid Plus, Dhani Loans, and Services, TVS Credit Services, a joint offering by Bajaj Finserv and Mobikwik, and LazyPay.

“It is opined that it shall be permissible under the payment and settlement systems laws as well as RBI regulations and directions (including PSS Act and PPI Directions) to undertake loading of funds into PPI Card of the Customer by the Financing Partner through the credit line/facility in an aforesaid manner,” the opinion by the former Chief Justice read.

While fintechs can use this in their favour, RBI’s word shall prevail on these matters.

For now, there are many interpretations, disappointments, and reactions after the two paragraphs issued by RBI on June 21. Fintechs meanwhile are scrambling for clear answers, or by some miracle a change of heart by the RBI.