In the heat and dust of competition, LambdaTest faces charges of trying to gain unethical access to BrowserStack’s IPR and sensitive client data

This was not a one-off incident. At least 60 BrowserStack employees were actively courted by LambdaTest with lucrative offers since the beginning of January 2022. Some were approached through staffing platforms like LinkedIn, some through reference contacts and some even through calls directly from the CEO of Lambda.

K, who spoke on the condition of anonymity, said he was a fresher and had been working with BrowserStack for three years. “I got an opportunity with LambdaTest through LinkedIn, and the offer was very attractive. However, when I spoke to the reporting manager at Lambda something didn’t feel right,” he said.

“I was told that I should develop the exact same product (core IP of public mobile cloud infrastructure) that BrowserStack is developing right now, replicating and developing similar tools. I was also told to share data on upcoming projects.”

LambdaTest was specifically asking the candidates to develop the entire public cloud infrastructure and local connection testing tool which is the core IP and a product of BrowserStack.

Most of the BrowserStack employees rejected the offer as they felt it was unethical and also feared that it might result in a lawsuit. About seven-eight employees joined the rival firm.

While there can be an overlap in the solutions provided, being told to develop and replicate the same developer and testing tools that one has worked on at the previous job is unusual in the SaaS industry, multiple people familiar with the matter, including product engineers, said.

“There may be some overlap in the solutions we offer but a Khatabook (accounting software firm) will not ask an employee of Tally to develop the same product for Khatabook … it is like stealing a company’s intellectual property (IP),” explained one employee who rejected Lambda’s offer.

Employees from Browserstack’s sales team were asked to “try and get some client details” while joining Lambda, said another employee from BrowserStack's sales team.

As per the employee, LambdaTest was not very keen on the fortune 500 or the big-size clients but rather very keen on small and medium business clients (SMBs) from across the globe.

“It is very easy to find big-size clients, finding those accounts are not difficult at all. The challenge is finding SMBs, you need extensive research and dedicated teams and spends,” said a BrowserStack executive without naming the clients who have now joined Lambda.

Around the time these offers were made, BrowserStack experienced a slight (less than 1 percent) drop in revenue, with at least 10 SMB clients from smaller parts of the US switching to Lambda, according to BrowserStack executives.

All the BrowserStack employees and executives spoke to Moneycontrol on the condition of anonymity.

One BrowserStack executive said, “It is not easy to get those clients unless someone leaked it.”

BrowserStack has around 50,000 enterprise clients and more than 1,000 employees.

A new war in SaaS 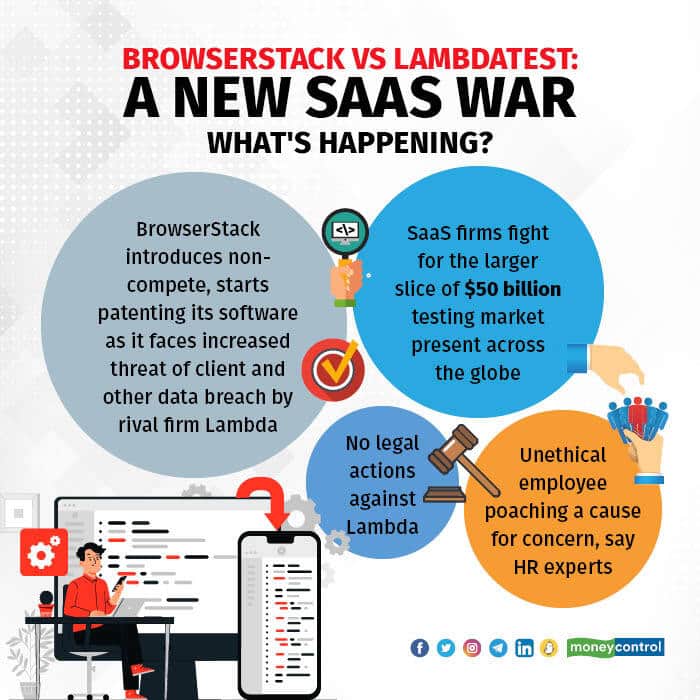 At stake is a lucrative $50 billion testing market that incumbents and new entrants in the space are going after.

The testing market which is dominated by very few players like BrowserStack, SauceLabs, Headspin, Perfecto and LambdaTest helps enterprises and individual developers to test their new apps and mobile websites, and even operating systems before releasing them on a large scale.

While global cloud testing is driven by demand from the US, the Indian market is getting very attractive with the push for digital transformation. The rising need for frequent security monitoring, load, and performance testing of web-based applications are some major factors driving revenue growth of this segment.

BrowserStack has now introduced a non-compete clause for employees and is patenting all its new and old software and developer tools amid the increased risk of a data breach.

The non-compete clause states that an employee agrees not to start a new business in the segment that the employer operates in, to take up employment in, or engage in any manner with any other competing entity.

When contacted, a spokesperson from LambdaTest denied the accusations from BrowserStack, saying “the information you shared with us on email is not grounded in reality”.  “We just celebrated our fifth year and have been on a tremendous growth path globally, something that has taken the industry and competitors by surprise,’’ he said.

According to the spokesperson, there have been more than 10 global players in the testing space such as SauceLabs, HeadSpin, BrowserStack and Perfecto that have provided technology that needed disruption in the past 15 years.

This kind of rivalry in the booming software-as-a-service sector is not new in India. Zoho and Freshworks, the poster boys of India's SaaS industry, were fighting each other in a US district court over allegations of misappropriation of trade secrets and data theft.

The controversy started in March 2020 when Zoho leveled charges against Freshworks under the Defense of Trade Secrets Act and other US trade laws.

Freshworks and Zoho resolved the issue in a federal court in 2021, and the former took action against the employee who had leaked the classified information.

An executive in a venture capital (VC) firm who did not wish to be named confirmed the problems between BrowserStack and LambdaTest, adding that attaching such strings to job offers was unusual.

“This issue has been brewing for quite some time now. The way LambdaTest sources client data, builds its products, is not ethical, this cannot continue,” the investor said.

Another BrowserStack executive said the issue is not about the number of employees getting calls, but the kind of information that LambdaTest is seeking from people they are looking to hire. “Our data is under threat now,” he said.

“Employees leaving is very common but taking away a company's client and other data is not ethical,” another person from BrowserStack said. "We have introduced a non-compete clause in the employee contract now. Whether it is enforceable or not is still under debate, but ethically this should be followed,” he said.

Besides the non-compete clause, Browserstack has also put in place a dedicated team to take care of patenting and other IPR regulations.

Employees in a tough spot

BrowserStack employees who received a call from LambdaTest for a job opportunity said he was interviewed two months ago by LambdaTest CEO (Asad Khan), who spoke about the opportunity at Lambda. “But in another interview with a technical person, I was asked to get at least 10-15 client contacts,” said this person who is part of the sales team.

To be sure, LambdaTest did not ask for any of this via mail or text, nor was it written into the terms of employment.

“Nothing was in the contract, everything was on call,” said another employee when asked for some documentary evidence of LambdaTest’s doings. “They were not arm-twisting, but from the tone, it was clear that we had to bring some classified information to the table,” the person quoted above said.

Moneycontrol contacted some employees who had joined LambdaTest from BrowserStack but did not get a response.

War for talent in SaaS intensifies

"SaaS industry is not a duopoly market, but more likely an oligopoly, at least in terms of the war for the right talent. It may look like a fight between two companies but it soon changes because new companies are getting developed every day and the skills are highly transferable,” said Amit Somani, partner at Prime Ventures.

Prime Ventures has a keen interest in Global SaaS and has invested in companies like Zuper, MyGate, CollPoll, Knight Fintech, and more.

"War for right, top talent in India especially in the SaaS industry is getting intensified... I'm advising all of our portfolio startups to work on the talent supply chain and not just GTM/marketing plans for acquiring customers, " Somani added.

There are niche SaaS segments where companies are finding it difficult to find the top talent.

“On the engineering side there are a lot of talent for that…however on the other aspects of SaaS like B2B marketing, sales and customer success, we really don’t have the top talent at scale in India yet,” said Prasanna Krishnamoorthy, partner at the Value SaaS Accelerator firm Upekkha.

Talent sourcing must be diversified,  he said. 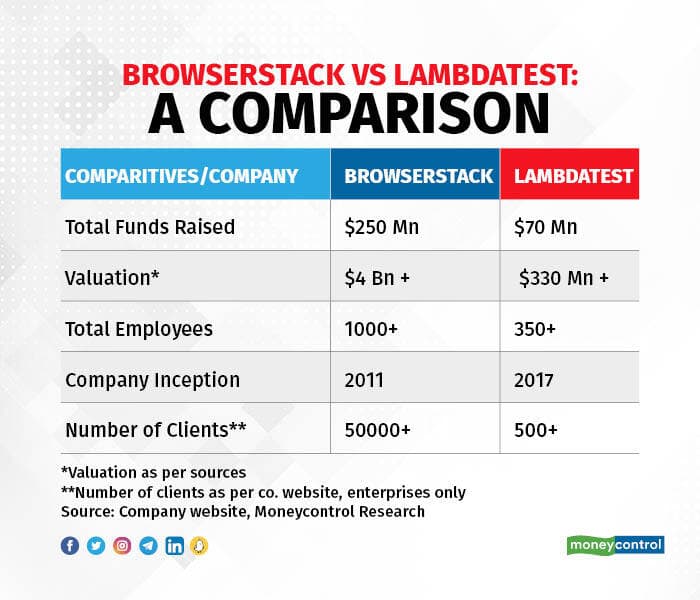 BrowserStack, which helps developers test for bugs and glitches across multiple desktops and mobiles, has more than 60-70 percent market share in India, according to market estimates. In fact, BrowserStack was the most valued SaaS firm from India until Freshworks was listed on Nasdaq.

The firm claims to have more than seven million developers that use its product, counting firms such as Google, Amazon, Microsoft, Twitter, Tesco, IKEA as clients, according to its website.

BrowserStack has products like Browserstack Web Live, Automate, Percy, and App Live which are their homegrown tools for interactive browser testing, visual, and selenium testing at scale.

LambdaTest, founded in 2017 by Asad Khan, lets users run both manual and automated tests of web and mobile apps across more than 3,000 different browsers, browser versions, and operating system environments.

The company claims to have run more than 100 million tests on its platform since its inception The company has around 15-20 percent market share in India.

Lambda raised $45 million in a round led by Premji Invest in May 2022, with participation from existing investors Sequoia Capital, Telstra Ventures, Blume Ventures, and Leo Capital.

Earlier, it raised $25 million from Sequoia, Telstra Ventures, Leo Capital, Blume Ventures, and others. Sandeep Johri, the former CEO of software testing platform Tricentis, also invested in the round.

“It is not the size, or the number of employees moving. When we started looking at LambadaTest’s website, their features and products looked like ours. They were much the same. There are lots of things that cannot be explicitly proven, but we know. This is not ethical,” one of the executives cited above said.

“For employees, it may be a great opportunity. But the leakage of sensitive data is a huge blow to the former employer,” said a member of a staffing firm requesting anonymity.

“We are training a lot of employees to help them understand that there may be better options than leaving a job. However, the war for talent is at its highest now and nothing can be done, except creating a great workspace,” he added.

“Many software giants introduced the same but it never worked. Employees will move wherever they find a better opportunity,” said an expert requesting anonymity.

BrowserStack has not taken any legal action on the alleged loss of data. It has only changed systems internally. BrowserStack executives said while their key, large clients are still with them, they have lost at least 10 clients in the past six months, which are based out of the US.

“How do we prove this legally? The problem is not the people who move, but companies that hire unethically,” said the executive from BrowserStack who is part of the legal team.
Invite your friends and family to sign up for MC Tech 3, our daily newsletter that breaks down the biggest tech and startup stories of the day
Bhavya Dilipkumar