Indian startups may see a shift in pace and quality of VC deals in 2022: Report

Consumer technology, fintech, and SaaS accounted for more than 75% of the VC investments in terms of overall deal value in 2021.

The Indian startup ecosystem is likely to witness a shift in the pace and quality of venture capital deals in 2022 due to global headwinds, although total investments are expected to remain in a range similar to 2021, according to a report by consultancy Bain and Co released in collaboration with Indian Venture and Alternate Capital Association (IVCA).

It said that global headwinds in early 2022 are likely to affect the funding outlook for the rest of the year but the funding momentum is expected to continue given the availability to capital and depth in the ecosystem.

"We expect that global headwinds and macro-conflicts impacting public tech listings are likely to have a trickle-down impact - investors are likely to double down on larger rounds in quality assets and focus heavily on leaner unit economics - with a slower pace of dealmaking and rationalised valuations," Arpan Sheth, partner at Bain & Company, said in a statement shared with Moneycontrol.

After an exuberant 2021, this year started off more cautiously with several highflying new age tech stocks coming under fire on domestic bourses amid a broader public tech stock selloff in the global markets. Companies like Zomato, Nykaa, CarTrade, Policybazaar and others have witnessed a 40-60 percent dip in their stock prices while Paytm is currently trading at a quarter of its IPO issue price.

This has also started murmurs of whether the euphoria is now slowing down in the country, with deals taking longer to close and some late-stage deals coming under pressure from the funding slowdown. Adding to the slowing pace are global tensions triggered by Russia’s war on Ukraine and rising oil prices, leading to caution among investors.

In a recent episode of Moneycontrol Masterclass, Madhukar Sinha, general partner at India Quotient, said that investors are increasingly focusing on the real health of the company and asking questions regarding metrics that were hidden behind the veil of growth.

"What has happened in the past 45-60 days is that companies that have raised a lot of capital and were planning to raise again are being questioned on their business and rationality to raise funds again," Sinha said in the episode that was aired on March 11.

This may also impact exits via public listings as several IPOs in the pipeline may adopt a wait-and-watch stance given global headwinds in public markets. Delhivery and Oyo have deferred their listing plans while Ola is pushing out its IPO due to the current market environment and contemplating raising a new round of funding at a lower valuation, Moneycontrol reported on March 22.

2021 was a pivotal year for the Indian venture capital (VC) ecosystem as investments grew nearly four-fold to a record $38.5 billion, amid an unprecedented startup boom in the country, the report said.

It said that the share of VC deal value within the overall PE (private equity)-VC investments reached more than 50% for the first time in 2021, as compared to less than 30% in 2020.

The exponential surge in VC investment was driven by increased average deal size and deal volume, both of which have doubled as compared to the year before. 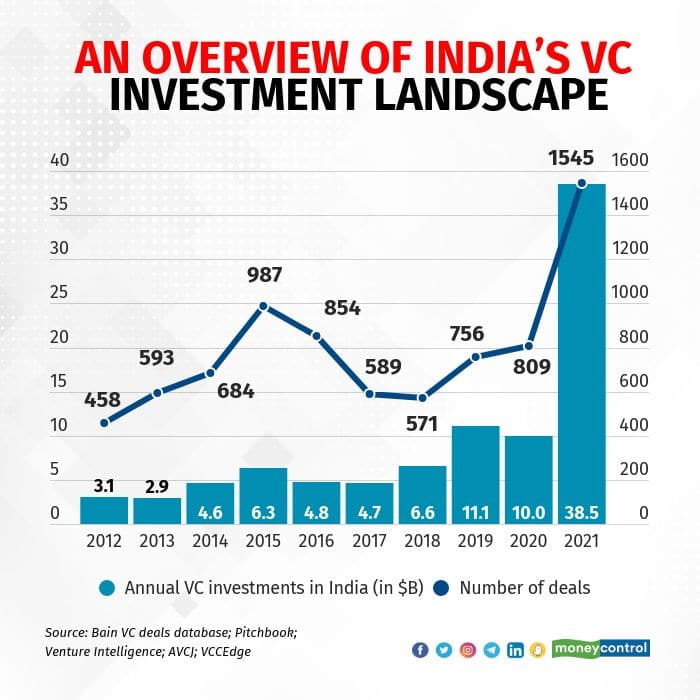 This was helped by a significant increase in large funding rounds of more than $100 million in the past year as global and domestic VCs led 92 such financing rounds in market leaders across several sectors such as e-commerce, online food delivery, fintech, edtech and gaming, as compared to around 20 such rounds in 2020, it said.

India also minted about 44 unicorns during the past year, which was more than the 30-odd unicorns created in the entire history of the country's startup sector prior to 2021.

On the flipside, early-stage deals also saw a dramatic shift as the financing rounds became bigger, with Series A rounds breaching more than the $10 million mark in average deal size, it noted.

"Maturing digital infrastructure fundamentals, ranging from access to cheap and ubiquitous data to UPI-led payment rails in confluence with increasing depth in the startup ecosystem and growing investor confidence as capital, saw exits through public IPO and private secondary routes led to an exceptional year for the Indian ecosystem," Sheth said.

In terms of sectors, consumer technology, fintech, and software as a service (SaaS) accounted for more than 75% of the VC investments in terms of overall deal value. 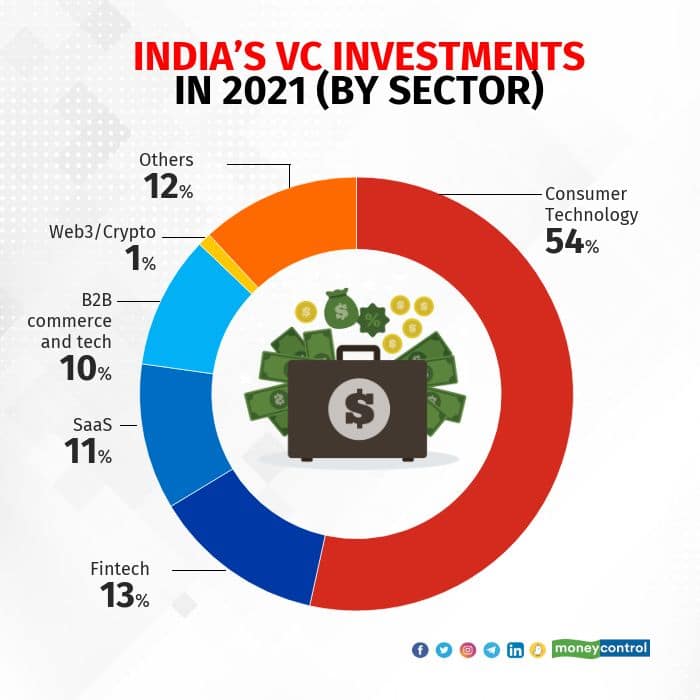 Read: Over 40% family offices have doubled their allocation to startups & VC funds in 5 years: Report

Tiger Global and Sequoia Capital retained the top spots on the leaderboard in terms of deal volume and capital deployed, while SoftBank remained prominent in terms of capital deployment, focusing selectively on large deals.

The year 2021 was also a landmark year for exits with $14 billion in total exit value for VC investors across secondary transactions and initial public offerings.

While secondary exits continued to be a mainstay for exits, accounting for about 60% of the exit value, the year also saw a wave of startup initial public offerings (IPOs), with some companies such as Zomato, Nykaa, and Freshworks having a spectacular public market debut while Paytm had one of the worst debuts ever by a major technology company.

Amid an ongoing war to retain and hire top talent in an intensely competitive market, 2021 also clocked a record number of ESOP liquidation announcements with more than 30 startups announcing buybacks, providing a wealth creation opportunity for employees.

Several traditional PE funds also showed interest in growth equity deals for technology companies while, at the other end of the spectrum, several new seed funds debuted with a focus on early stage deals, the report said. The active investor base in India crossed more than 660 in 2021, from a base of 516 in 2020, it added.