Exclusive Webinar :Don't miss the latest webinar on Global Investing with Passive Products on June 22, 11am
you are here: HomeNewsBusinessStartup

Fintech firms globally raised a record $22.8 billion in the first quarter of 2021, more than double the previous quarter, according to a report from CB Insights, a data platform.

Large rounds of over $100 million, accounting for 69 percent of total funding in the quarter, drove the boom, at a time when digital payments, investing, insurance and more has become mainstream during the COVID-19 pandemic as people stay at home. 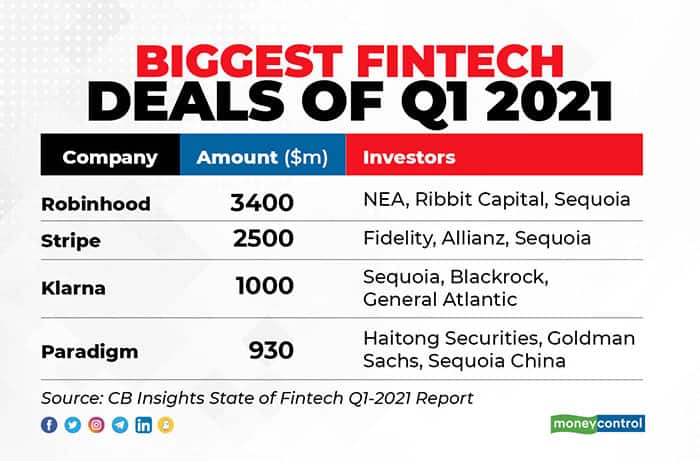 Indian fintech also has been on a tear, with credit card payments firm Cred, payments gateway Razorpay and lender BharatPe being valued at $2 billion, $3 billion and $950 million- increases in a very short period.

Mergers, acquisitions and Initial Public Offerings by fintechs too shot up during the quarter, with 11 IPOs and 67 M&A deals, compared to 10 and 50 the previous quarter. Many of these companies also went public via Special Purpose Acquisition Companies, or SPACs- a newly popular option whereby startups can list with fewer regulatory requirements than ever before. Brokerage firms Bakkt and eToro, personal finance startup SoFi and neobank MoneyLion all went public via this route. However, fintech IPOs have broadly lagged the S&P 500 benchmark index, underperforming relative to other technology sectors and the stock market as a whole, the report said.

Among sub-sectors of fintech, payments, digital lending, small and medium businesses and wealth management grew the fastest in terms of funding they received, while banking, capital markets and insurance saw investments slow down compared to the previous quarter.