MC Explains: Collapse of building in Kurla once again puts dilapidated buildings of Mumbai in focus

Residents fear leaving their homes, despite the buildings being in dilapidated condition, due to difficulties involved in staying in transit camps, and chances of losing control of their homes during the redevelopment stage.

A team of 100 people from NDRF conducted search and rescue operations at the collapse site. (Picture credits: NDRF)


Nineteen people were declared dead, at least 14 others were injured and several were feared trapped in the debris as the ground plus three floors of a 49-year-old private building collapsed in the Kurla area of Mumbai. The incident was reported on June 27 at 11.52 pm, according to the Disaster Management Control room of the Brihanmumbai Municipal Corporation (BMC), also known as the Mumbai Civic Body. The BMC has further maintained that it will probe the role of the structural auditor who had conducted a structural audit of the building following notices issued by the civic body.

According to BMC officials, one entire wing of the Naik Nagar Society, built on collector's land in the year 1973, was declared dilapidated and issued notices since 2013.

Rescue operations are continuing at the site and several residents of the building are feared trapped.

The Mumbai Fire Brigade (MFB) on receiving details rushed to the spot and declared the incident to be of Level 3. Along with MFB, staff from the Disaster Management Cell of the BMC and the National Disaster Response Force (NDRF) was also called in at 1 am. All those rescued were taken to civic run Sion and Rajawadi Hospital. 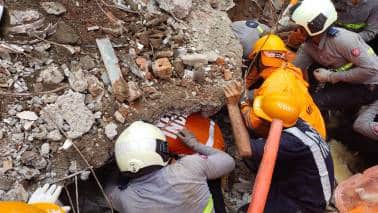 In a statement issued at 10 am on June 28, the NDRF said, "As per information received from BMC Control Room Mumbai, on 28/06/2022 at 0010 hours, a building of C1 category, Shivsrushti Building in Kurla, Mumbai, had collapsed in which 7 people have been rescued by the fire brigade before the NDRF (reached the spot) and shifted (them) to hospital of Rajewadi and Sion, Mumbai. On requisition, 2 teams of NDRF, 1 from Ghatkopar and another from RRC, Mumbai, rushed to incident site and immediately started search and rescue operations at the incident site in which 2 (male members were) rescued (alive) and 1 male body recovered from debris, jointly with the fire brigade. Search and rescue ops are underway."

Ashwini Bhide, Additional Municipal Commissioner of BMC, who visited the spot said, "D wing of the Naik Nagar Society collapsed last night and some people are still feared to be trapped. The building has been dilapidated and since 2013 notices were issued to the building. The building was built in 1973 and is of private ownership, constructed on collector’s land. Residents in other wings have been asked to vacate, which is under process." NDRF officers were present at the site for search and rescue operations from 1 am on June 28. (Picture credits: NDRF)

Environment Minister Aaditya Thackeray from the Shiv Sena who is also the Guardian Minister in Mumbai took to Twitter saying, "Visited the spot at 2 am where 13 people have been rescued and 15 reportedly still feared to be trapped. We are reviewing the notices issued by the BMC to the dilapidated buildings to look into evacuation and demolition of such structures, ensuring  the safety of the residents."

Thackeray added, "It is my earnest request to  Mumbaikars residing in dilapidated accommodations, to please take the notice from BMC and other authorities seriously and vacate the premises at the earliest. It can be of great help during such unfortunate circumstances."

Hitesh Dederiya, 21, who resides near the collapsed building, said, "My uncle and aunt reside in the building. During the collapse, my aunt and my brother managed to get out of the building, but my uncle could not. It was only 12 hours later at around 1 pm when we got the news of my uncle being rescued safely. We are thankful to the authorities involved in rescue operations and hope all those who are trapped can be rescued at the earliest." Iqbal Chahal, Municipal Commissioner of the BMC, told reporters on the collapse site, "Once the rescue operations are completed, an enquiry will be set up to probe the role of the structural auditor."

How many dilapidated buildings in Mumbai?

According to the list issued by the Mumbai Civic Body, it had identified 337 buildings in Mumbai that are dilapidated or in the C1 category requiring immediate vacating of the structure followed by demolition. In today's incident, the building was declared dilapidated and notices to vacate the premises were also issued by the BMC. However, the residents did not vacate the structure.

The Mumbai Civic Body, every year before monsoon, issues vacate notices to all the dilapidated buildings in the city. According to the list issued in April 2022, 163 out of 337 buildings were in the western suburbs of Mumbai, followed by 104 in the eastern suburbs, and the remaining in the island city also known as south Mumbai.

Further, in terms of cessed buildings that are regulated by the Maharashtra Housing and Area Development Authority (MHADA) in Mumbai, there are more than 14,000 dilapidated buildings in the city. Of these, 21 buildings were declared extremely dangerous by the MHADA on May 26, 2022. The residents of such buildings are asked to vacate their homes immediately and shift to transit camps provided by the authorities.

Why do residents continue to stay in dangerous buildings?

Manoj Sawant, a 41-year-old Sewri resident in Mumbai, said, "Our building of two floors was declared dilapidated and we vacated the building in the year 1997. We were promised redevelopment in three years, but around 25 years have passed, but nothing has happened. We have been residing in a transit camp since 1997. This is one of the biggest reasons why citizens do not vacate their homes. There is fear that once we vacate our home, we will lose ownership and will have to reside in transit camps for a lifetime."

What needs to be done?

While there are thousands of citizens residing in dilapidated buildings in the city, the problems involved in rehabilitating these citizens are not new. Since the past several years, several committees and court orders & observations have asked the Maharashtra government machinery to find a solution to end this problem, but the solution looks far for over.

However, in order to undertake speedy redevelopment of around 16,000 cessed dilapidated buildings in the city, the MHADA had made certain amendments in the Act, wherein the requirement of written consent of the occupier to the proposal for reconstruction by MHADA was brought down from 70 per cent to 51 per cent. Further, provision is made for payment of rent to the occupants in lieu of temporary accommodation. However, the final nod from the President of India on the amendments is pending, said MHADA officials.

Dilip Muglikar, a housing professional who has worked on affordable housing for quite a long time, said, "In terms of private buildings that are in dilapidated condition in suburban Mumbai or in urban conglomerates of Maharashtra, I feel an extensive policy for redevelopment is the need of the hour. There are things like cluster redevelopment but we need something even for standalone buildings that are dilapidated and require redevelopment. Once the building is dangerous, authorities issue them a notice to vacate, the policy should come into play here in this situation covering what the residents, owners of these buildings, and other stakeholders need to follow in the legal framework by way of legal statute.”