Contest Alert:Last day to win Amazon vouchers worth Rs 5000. Take the MCPRO Quiz today to grab yours!
you are here: HomeNewsBusiness

Once upon a time when the Yamuna was a river

Boat races, fishing licences and picnics on the banks—the Yamuna was Delhi’s delight until the city began dumping its sewage, effluents and debris into it. Can the river be saved?

Photographs of women devotees offering prayers to the Sun god braving Yamuna’s toxic froth on Chhath Puja are an annual affair as is the outrage that follows over the condition of the river that once was Delhi’s provider.

Fish, turtles and even crocodiles thrived in the Yamuna’s waters, which also saw boat races. Its floodplains provided fresh vegetables and its banks were a popular picnic spot.

As residents of Delhi recall the glory that the Yamuna was, the river has been reduced to a toxic drain in Delhi, choking on human waste, industrial effluents, debris and everything muck that is being dumped into it.

In Delhi, the Yamuna, which originates from Yamnunotri glacier in western Garhwal in Uttarakhand, traverses a distance of about 52 km. The 22-km central stretch —from the Wazirabad barrage in the north to the Okhla barrage in the south—accounts for more than 70 percent of the pollution, which comes from untreated industrial and domestic discharge and solid waste, a report by now-disbanded Yamuna Monitoring Committee said.

A walk down the river

That is a far cry from when a fee of 50 paise was charged to fish in the river.

“Yamuna used to be vibrant. I still remember when we used to go fishing and swimming in the river during our childhood days. We cycled or walked to Gandhi’s samadhi at Rajghat and further to the Yamuna banks. We used to get a day’s licence to fish in the river for 50 paise,” Khalil Ahmad, an Old Delhi resident, told Moneycontrol.

According to 63-old-Ahmad, the floodplain was lined with lush green fields and he and his friends would pluck radish and carrots there.

“It was our picnic spot. Now vegetables grown on Yamuna banks are toxic. That wasn’t the case during our childhood days in the early 70s,” said Ahmad, who is associated with the Anglo-Arabic School and Tareekh, Art and Culture Trust.

Sikander Beg Changezi said his father, Naseem Mirza Changezi, the “grand old man” of Old Delhi who died in 2018 aged 108, used to tell him about Yamuna’s streams that flew through Shahjahanabad.

Shahjahanabad was the walled city built by the Mughal emperor Shahjahan when he shifted his capital from Agra in 1639. 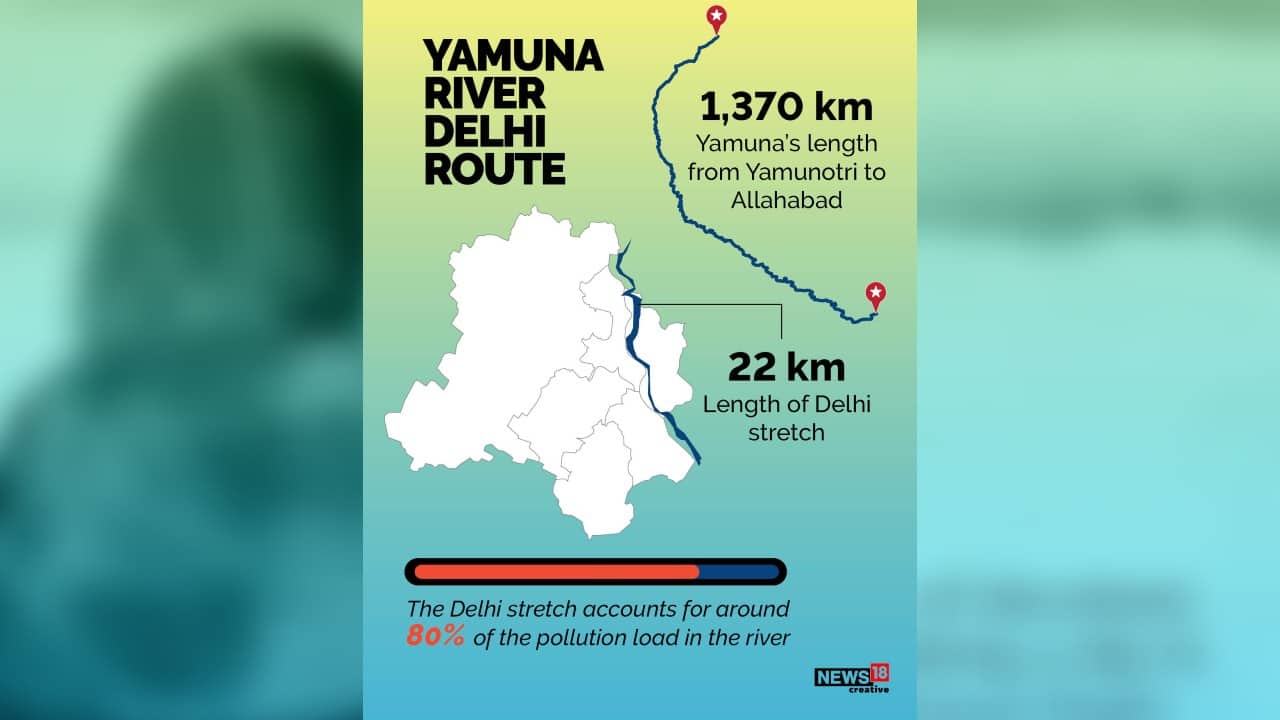 The Delhi stretch accounts for around 80 percent of the pollution load in the river. (Image: News18 Creative)

One stream used to flow through Chandni Chowk from Ballimaran to Wazirabad to connect the Yamuna. Another connected Sadar Bazar to Pul Bangash (the bridge of Bangash), which was built over one such canal.

“Ballimaran was home to boatmen who used to ferry goods through these waterways,” Changezi said. Balli is a pole that is used as an oar and that’s how Ballimaran got its name.

Darya Ganj, a haunt of the bibliophiles and a thriving commercial hub, too, derives its name from the Yamuna. Darya Ganj means a neighbourhood by the river. The word Ganj also refers to a trading post or a market, a nod to the business that the Yamuna brought to Delhi.

It was once a busy waterway, said Sohail Hashmi, a Delhi-based filmmaker and heritage activist. “The Ashokan Pillar at Feroz Shah Kotla was brought through the Yamuna on barges. All the red sandstone brought to Delhi to build the Red Fort, Jama Masjid and other palatial buildings was routed through the Yamuna,” Hashmi said.

The Yamuna was an important trade route, too, as it connected with the Ganga in Allahabad and then to cities like Kolkata. “Nur Jahan is said to have controlled all trade into Agra through the Yamuna. Agra was a major centre of the indigo trade,” Hashmi said.

Nur Jahan was the last and the most powerful of Mughal Emperor Jahangir’s wives.

Its beauty and rich aquatic life find mention in the works of poet Akbar Allahabadi, the late RV Smith, often referred to as the chronicler of Delhi, and the Delhi Gazetteer (1912) that talked about the presence of fish, turtles and crocodiles in the river, said Manoj Misra, convenor of Yamuna Jiye Abhiyan, a consortium of NGOs and individuals working to save for the Yamuna.

In the 1890s, the flush or sewer system was introduced in Shahjahanabad by the British and that is when the muck began to flow, said Hashmi.

“But the river hadn’t been dammed then like it is now. The population wasn’t so large. Many natural streams contributed to the flow of the river and so the sewage got diluted but from then to now, we have only been polluting the Yamuna,” he said.

Irrigation and drainage maps of Delhi show more than a dozen streams and stormwater drains between Tughlaqabad and Kushak Nallah carrying fresh water from the Aravalis to the Yamuna.

“Illegal colonies have come up on both sides of these drains and untreated discharge flows from these areas to the drains and then to the Yamuna,” Hashmi said.

Over the years, industrial areas such as Okhla, Naraina and Mayapuri came up and their untreated waste flew into the river.

“During earlier times, people were never dependent on the Yamuna for their water needs. There were step wells and baolis. Every house had a well. Those sources were good enough to meet the water needs at that time,” Misra said. 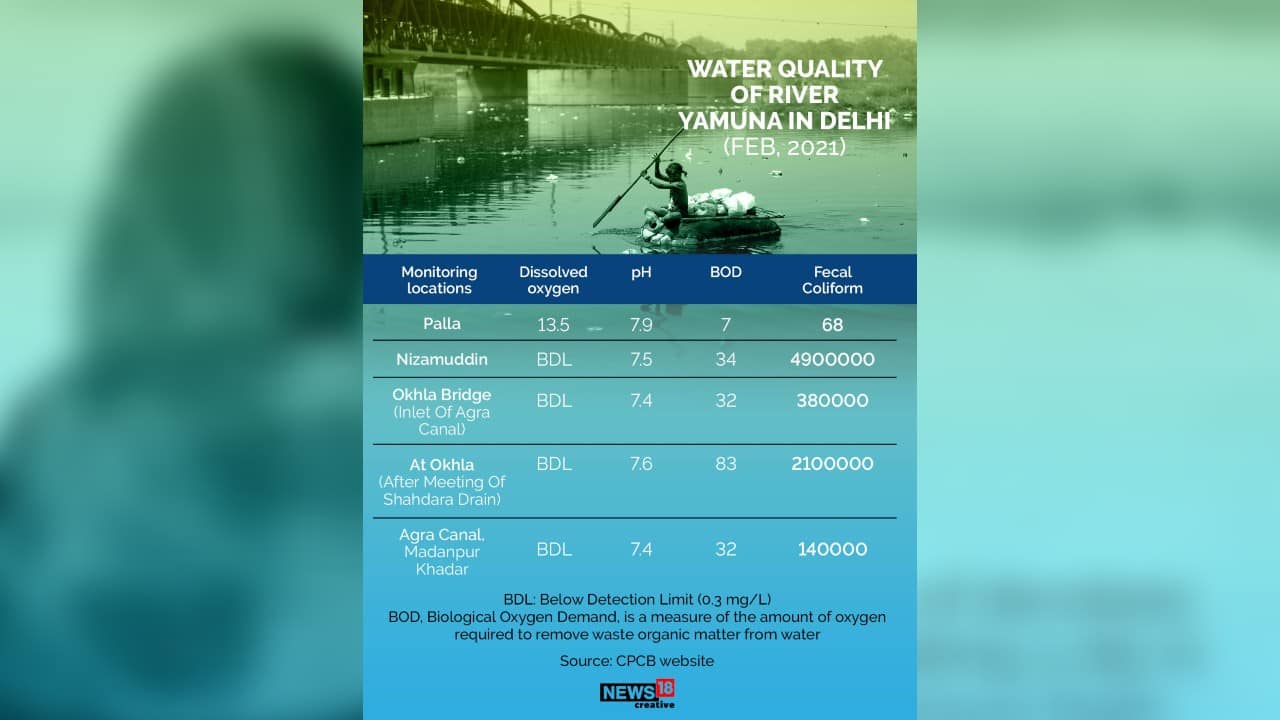 The Wazirabad barrage, built in 1957, was another turning point, dealing one more blow to the river’s natural flow, which diluted pollutants, Misra said. “Barrages and dams obstruct the natural flow of rivers and should be done away with,” he said.

Whatever little is left is stopped at the Wazirabad Barrage. As the river heads south, all that is left is the discharge from homes and industrial effluents, barring peak monsoon days when excess water is released at Hathnikund and Wazirabad.

“My father told me stories about boat races on the Yamuna in the early 1900s. He used to go fishing in the Yamuna’s canals near Sadar and other places behind Rajghat. He even founded an angler’s club. Look at the river now. Will any marine life survive in these toxic and shallow waters filled up with debris? ” Changezi asked.

Until 40 years ago “Yamuna was a sprawling even river then. It is sad that it is no more than a ganda nalla (dirty drain) now,” Changezi said.

What ails the Yamuna?

According to the Centre for Science and Environment (CSE), a Delhi-based public interest research and advocacy organisation, Yamuna’s dissolved oxygen levels, a measure of a river’s ability to sustain life, is zero in Delhi. Presence of untreated industrial effluents, organic matter from decomposing vegetation, pollutants from industries on the banks of the river also contribute to the foam. (Image: News18 Creative)

Various studies and reports over the years also point to the problem.

“Frothing points to a polluted river. Release of untreated or poorly treated household and industrial discharge is behind the frothing,” said Sushmita Sengupta, Senior Programme Manager of Water Programme, at CSE.

Phosphates from detergent effluents from households and industries form the froth. The pollutants do not get diluted because the Yamuna has less water flow during this time of the year, she said.

A report by the now-disbanded Yamuna Monitoring Committee (YMC), set up by the National Green Tribunal to oversee cleaning efforts, blamed untreated discharge from neighbourhoods, industrial effluents, dumping of debris and bio-medical refuse into drains for pollution.

Use of detergents and chemicals at dhobi ghats along the river banks, chemical fertilisers and pesticides used by farmers on the floodplain and immersion of idols were the other contributing factors, the report said.

Not just Delhi, industrial effluents also flow into the Yamuna from Haryana and UP, the YMC said.

Though the volume of industrial effluents was low compared to sewage, it is poison for the river. “There has to be zero discharge of industrial pollutants into the river and until that problem is completely addressed, it will not make much difference to the river,” said Misra.

Hundreds of crores have been spent on projects such as Yamuna Action Plan and other schemes to clean the river.

According to 2018 estimates, Delhi spent more than Rs 1,500 crore to clean the river and this does not include the cost of common effluent treatment plants, the CSE said.

“This is possibly the highest amount spent on river cleaning in the country but it has not worked, as is evident from the pollution data,” Sengupta said.

Delhi can treat only about 600 million gallons a day (MGD) of sewage because of which untreated discharge is released directly into the Yamuna. The Delhi government plans to increase the capacity to 850 MGD and add new plants. Cleaning up the Najafgarh, Badshahpur and Ghazipur drains is also part of the plan.

But is it possible to clean the Yamuna in just three years?

“Everything can be done if there is political will… a completely clean Yamuna like it was in the early 1900s may not be possible so soon but we should do whatever is possible…at least meet outdoor bathing standards,” Sengupta said.

CSE has called for an immediate check on the mixing of untreated and treated waste in drains, setting up sewage treatment plants on the banks and reusing treated waste, among other things.

“Delhi can also begin to reduce its water demand and build water-harvesting systems for capturing rainwater for discharge in the lean season, so that water can flow in the river,” Sengupta said. “There is a need to relearn the science and art of river cleaning. Business as usual will not result in a clean river.”

Misra stressed “understanding the real need of the river”, as he recalled a  clean Yamuna during the lockdown in 2020. As industrial activity stopped, there was no discharge of effluents and catchment areas got good rain, increasing the water flow, he said.

“So the river itself spoke what it needed. A flowing river can take care of whatever flows into it. That was the message. Is it so difficult to replicate?” Misra asked.
Nilutpal Thakur is an independent journalist and content creator based in Delhi
Tags: #clean yamuna #pollution #Yamuna
first published: Nov 21, 2021 05:24 pm