Two parallel runways mean Bengaluru could increase air traffic movement to over 60 per hour compared to around 45 in Mumbai. This could translate into over 2,000 additional seats per hour. The final result could be Bengaluru overtaking Mumbai.

On June 8, two announcements came in. The first was the GVK group making public the video rendering of the terminal and facilities at the Navi Mumbai airport.

The project has been stuck for a long time, and, in all probability, will miss its revised deadline. On the same day, the Indian Hotels Company Ltd (IHCL), which runs the Taj Group of Hotels, unveiled plans for a very large property near the Bengaluru Airport.

The 775-key property will be a mix of 450 rooms of Vivanta and 325 rooms of the low-cost brand Ginger. The group already runs a property at the airport, named Taj Bangalore.

Interestingly, both airports have changed hands in the recent past. The Bengaluru airport was part of the GVK portfolio but was sold to the Prem Watsa-led Fairfax later.

How the developments span out here on could see Bengaluru possibly emerging as a number two airport in the country by domestic traffic in future.

What is Bengaluru Airport City and what is being done?

Bengaluru International Airport Ltd (BIAL) has over 500 acres of land adjoining the airport which can be developed. A separate company, Bengaluru Airport City Ltd (BACL), has been formed to look after its development.

BACL is a wholly owned subsidiary of BIAL. This company has been formed to monetise real estate and aims to have medical and biotech parks, malls, hospitality districts, a concert arena, convention and exhibition centres, among others.

The Navi Mumbai airport has been a pipe dream for two decades, if not more. As it continues to move at a snail's pace, the existing airport at Mumbai has run its course. Everything possible to improve the movement has been done.

Rapid Exit Taxiways (RET), demolishing the old ATC tower complex and other infrastructure, has increased air traffic movement to the maximum. While this made the airport the busiest single-runway airport in the world, it also signified that there is no scope for further growth.

In fact, the state-of-the-art Terminal 2 had to be truncated during construction. The deviation was necessitated due to issues surrounding acquisition of land, which has been encroached upon.

How the numbers are stacked up and what drives traffic

Bengaluru has seen rapid growth in the last two decades. The city has grown by leaps and bounds and that has translated into new air links to cities hitherto having one-stop connections.

Youngsters with disposable incomes are increasingly travelling to leisure destinations and frequent visits to or from families and a sustained increase in services and growth in the manufacturing sector have seen an increase in business travel as well.

Since the opening up of domestic civil aviation, post lockdown in 2020, Bengaluru has consistently seen more domestic passengers than Mumbai. One of the reasons is that Maharashtra had capped flight services and imposed several restrictions as it became the epicentre of the pandemic. 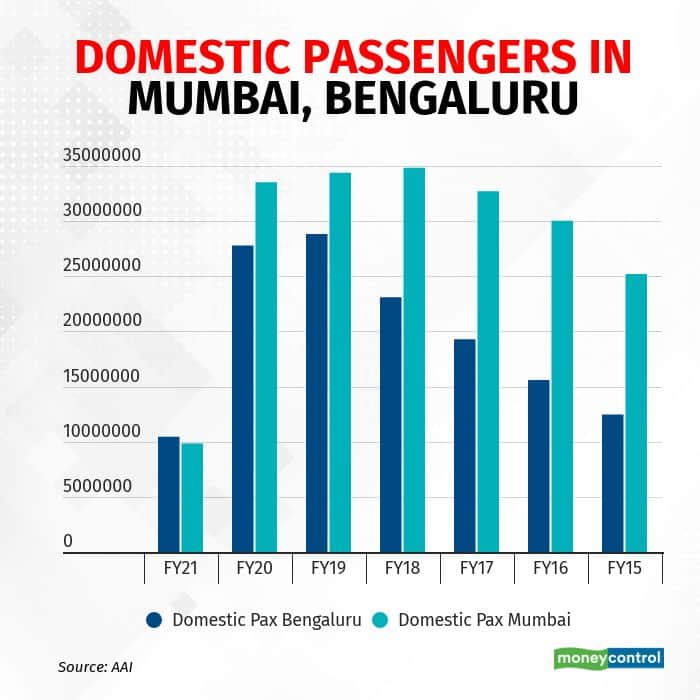 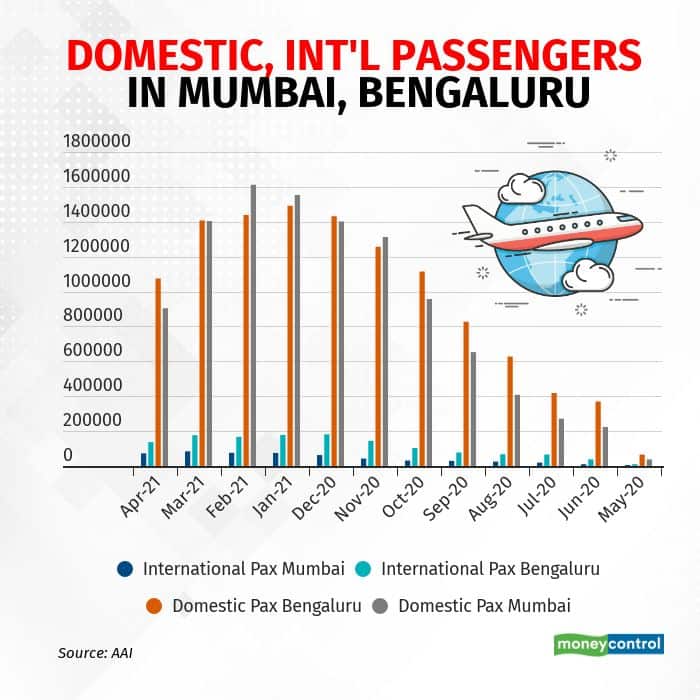 The city has seen hyper-growth, what with a relatively younger population with disposable income, increased exposure to foreign countries due to company travel, setting up of global brands in both services and manufacturing industries, and a population from across the country. Availability of land, unlike in Mumbai, has also helped the expansion of the city.

With this also comes another advantage -- a second and parallel runway, making Bengaluru only the second airport in the country to operate two independent parallel runways. Mumbai, Chennai, Kolkata, and Hyderabad, all have two runways, but in the case of Mumbai and Chennai, they intersect.

The only other airport handling parallel operations is New Delhi, which has three runways. Two of them operate simultaneously. The third one was built later -- in 2008.

Two parallel runways mean Bengaluru could increase air traffic movement to over 60 per hour compared to around 45 in Mumbai. This could translate into over 2,000 additional seats per hour.

Until the late 2000s, Mumbai remained the top airport in the country by passenger traffic. The lack of ability to expand and Delhi’s growing businesses meant that Delhi overtook Mumbai and the gap has since grown gap steadily. The same could happen for Bengaluru - additional capacity could help the airport overtake Mumbai.