Air India disinvestment: Relaxing net worth norm in search of a buyer

Relaxing the net worth criteria would increase the universe of bidders as there are hardly any players with positive net worth. This could help in fetching a better valuation.

Now, as per media reports, the Cabinet is mulling to allow companies with negative net worth to bid for Air India.

Air India disinvestment – a quick recap
The government wants to privatise Air India and five of its subsidiaries - Air India Engineering Services, Air India Air Transport Services, Air India Charter Limited, Airline Allied Services, Hotel Corporation of India. Subsidiaries are expected to be hived off separately, which will help reduce consolidated debt.
Close
What will change?
The evaluating committee had initially set the minimum net worth requirement for the bidder if it wants to bid for Air India. But, now, during the process of finalising bidding norms for the sale, the committee is evaluating to do away with the minimum net worth criteria. This comes against a backdrop that the many airlines companies are having negative net worth and if the minimum net worth criteria is maintained then there would be few players to bid. The Cabinet, however, would ease the criteria only for the bidders who have track record of running an airline successfully.

What is the need for change?
There are two possibilities which could have driven the change.

Firstly, in the absence of this relaxation, IndiGo would have been the only contender to buy Air India out of the Indian carriers. IndiGo (only company with positive net worth in India), already is a leader in the domestic market and would become leader in international market as well should it acquire the international business of Air India. In that event, it would turn into the unchallenged king of Indian skies, miles ahead of peers.

Secondly, IndiGo is interested in Air India International and Air India Express. If the deal with IndiGo goes through, then government would find it difficult to sell the other pieces of Air India as most of others have negative net worth. Relaxing the requirement may help getting players to buy the remaining pieces as well.

Benefit to Air India?
Relaxing the net worth criteria would increase the universe of bidders as there are hardly any players with positive net worth. This could help in fetching a better valuation.

Bidders queue
After the announcement of disinvestment of Air India by the government, many players have expressed interest in acquiring the national carrier. Besides Indigo, there is one unidentified foreign airline which has also expressed interest in Air India. In a recent development, a consortium of three airlines: Jet Airways, Air France – KLM and Delta Airlines have submitted an expression of interest in acquiring debt-ridden Air India.How much will Air India fetch?Our back-of-the-envelope calculations indicate that if Air India is valued using EV/ EBITDA multiple of 10x and EV/ sales multiple of 1.5x (both discount to that of IndiGo), the company will fetch Rs 22,075 crore and Rs34,954 crore, respectively. The average of the two works out to Rs 28,500 crore. However, after adjusting for net-debt, which is Rs 54,715 crore, there is no value left for the equity shareholder. This would warrant substantial haircut to be taken by the lenders to leave something on the table for the upcoming equity shareholders. 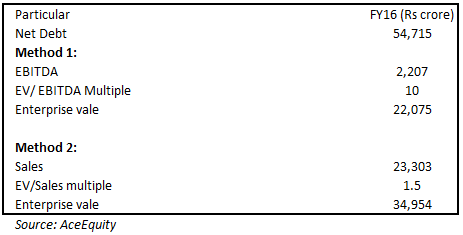 For more research articles, visit our Moneycontrol Research Page.Get access to India's fastest growing financial subscriptions service Moneycontrol Pro for as little as Rs 599 for first year. Use the code "GETPRO". Moneycontrol Pro offers you all the information you need for wealth creation including actionable investment ideas, independent research and insights & analysis For more information, check out the Moneycontrol website or mobile app.