US 'recession': Why is the yield curve telling 2 different stories?

A distorted yield curve is giving conflicting signals on the probability of a US economic recession, depending on which tenure spread is watched

A closely watched tenure spread on the US treasury bond yield curve inverted on March 30, triggering expectations that a recession was one or two years away.

The yield on the two-year treasury note climbed higher than that of the 10-year bond briefly, bringing the spread down to negative. This means that investors are willing to forgo higher returns for holding bonds longer because they believe that the economy would do badly. Bond yields move inversely to prices.

A study by the Federal Reserve of San Francisco said that since 1955, the inversion of the curve involving these two tenures preceded all but one recession.

No wonder economists place a high weightage on this spread. The spread between the two-year and the 10-year note is now roughly five basis points from a historic average of about 80 basis points. One basis point is one-hundredth of a percentage point. 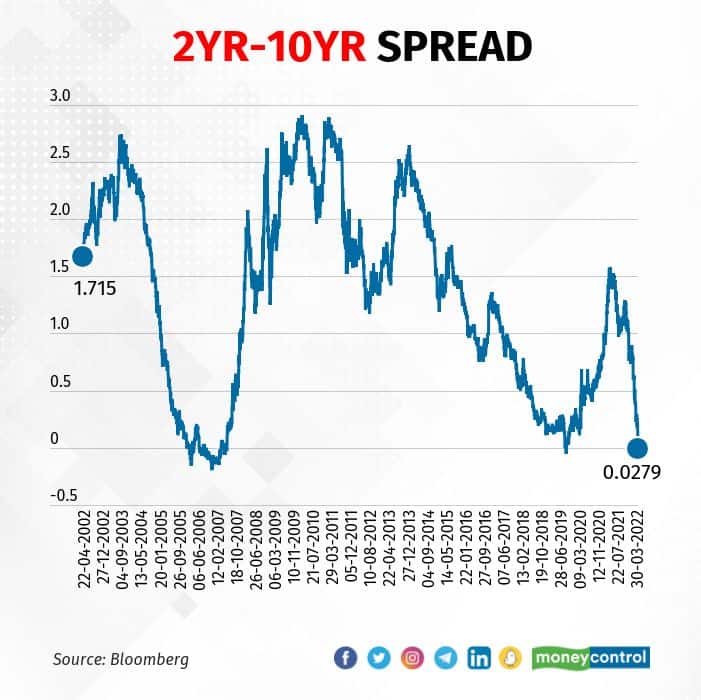 This part of the yield curve has company too. Before the inversion here, the five-year bond yield has already exceeded that of the 30-year bond yield, the first time since 2006. This is yet another spread tracked by investors. But the five to 30-year spread is a less watched part as its accuracy in predicting recessions does not hold up. Even so, together with the inversion at the two-year to 10-year interval, a case for a recession has gotten stronger. Even as the fear that the US Federal Reserve’s rate hikes and expected reduction in its balance sheet could push the US economy into a recession, some economists believe that it is not a certainty.

There is one part of the yield curve that is still predicting decent economic growth. This is the gap between the three-month and the 10-year yield.  This captures the short-term expectations of the market and is as widely tracked, if not more, as the two-year and 10-year gap.

So far, the three-month yield has remained below the 10-year treasury yield. Note that the yield curve from the three-month to the two-year tenure is still relatively steep. The short-term yield curve captures the expectations of the Fed rate hikes accurately. 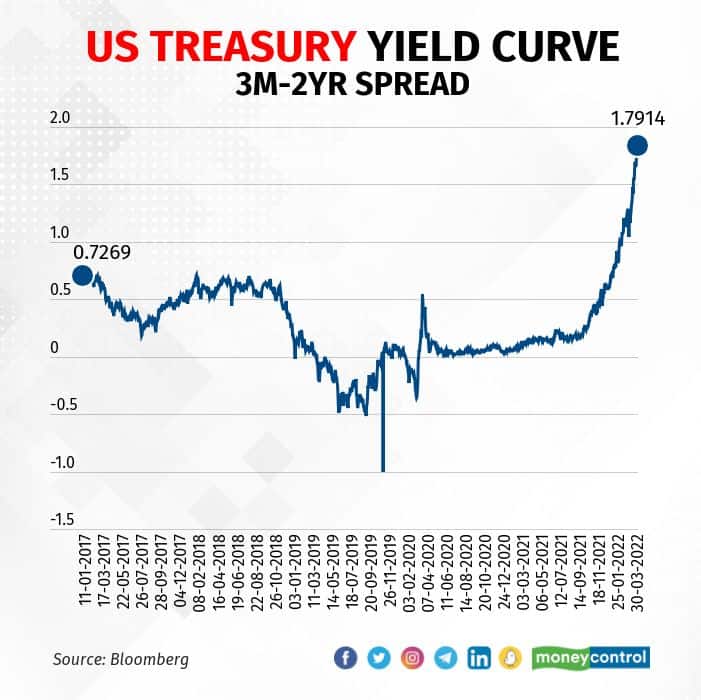 The upshot is that the US treasury yield curve is giving conflicting signals on recession, depending on which point of the yield curve you are at.

Some economists point out that during past recessions, real rates had climbed. This time, real rates are still negative in the US and they give a lot of comfort.

The yield curve itself is highly distorted this time around given the Fed’s unprecedented quantitative easing over the years. Another comfort for investors is that a recession occurs one to two years after the inversion of the yield curve. Equity markets tend to perform well in this interval.