One should avoid trading aggressively till the time market stabilises from this turbulence, Sameet Chavan of Angel One advises

Bears have taken charge of Dalal Street after significant correction in the last three trading sessions of the week ended September 16, forcing the market to bleed by 1.7 percent during the week. The aggressive interest rate hike expectations in the US, selling by FIIs and correction in IT stocks weighed on market sentiment.

"As far as support is concerned, 17,400 we are seeing as a key support. The moment we see Nifty sliding below it, we may see correction getting extended in the market," Sameet Chavan, Chief Analyst-Technical and Derivatives at Angel One said.

On the flipside, he feels if Nifty has to find its mojo back, it needs to go beyond Friday's high of 17,820 on a closing basis. So meanwhile, any minor bounce back towards 17,650 – 17,750 should ideally be used to exit longs.

After Friday's close, the market expert advised to adopt a wait and watch approach and let's see how global market performs over the weekend.

One should avoid trading aggressively till the time market stabilizes from this turbulence, he advised.

Let's take a look at the top 10 trading ideas by experts for the next three-four weeks. Returns are based on the September 16 closing prices:

The stock is in rectangle consolidation since August 2022. It is facing resistance at Rs 325 and finding support at Rs 300.

If we consider the volume pattern it is rising whenever the stock moves to the upper boundary of the trading range, which is a sign of an upside break out, which is more likely in the near term.

It is a partly buy at current levels and adding more at Rs 305 is advisable. Place a stop-loss at Rs 295 to hold a long position. On the upside, it will rebound to Rs 350 or Rs 370 in the medium term. The stock is consolidating at the highest levels of the current rally. On a weekly basis, it has crossed the previous swing high, which was at Rs 9,200 and it is positive for the stock as the broader pattern is of a saucer, which will eventually lift the stock to Rs 10,000 levels in the medium term. 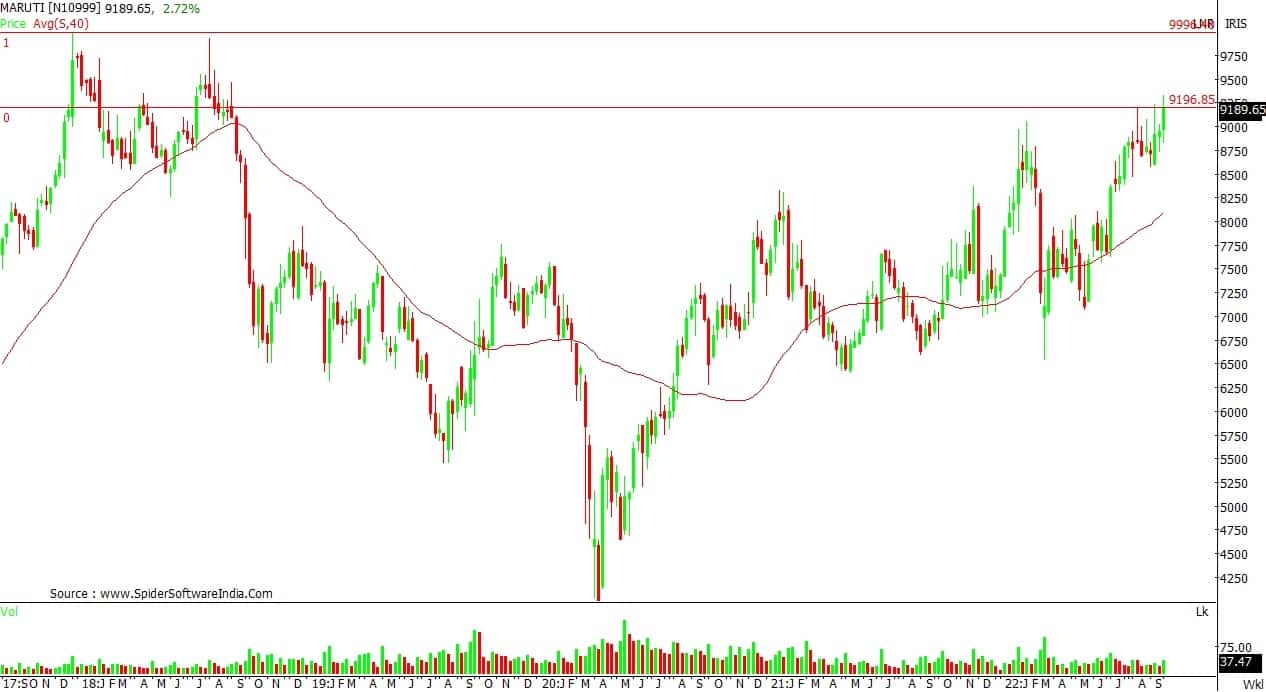 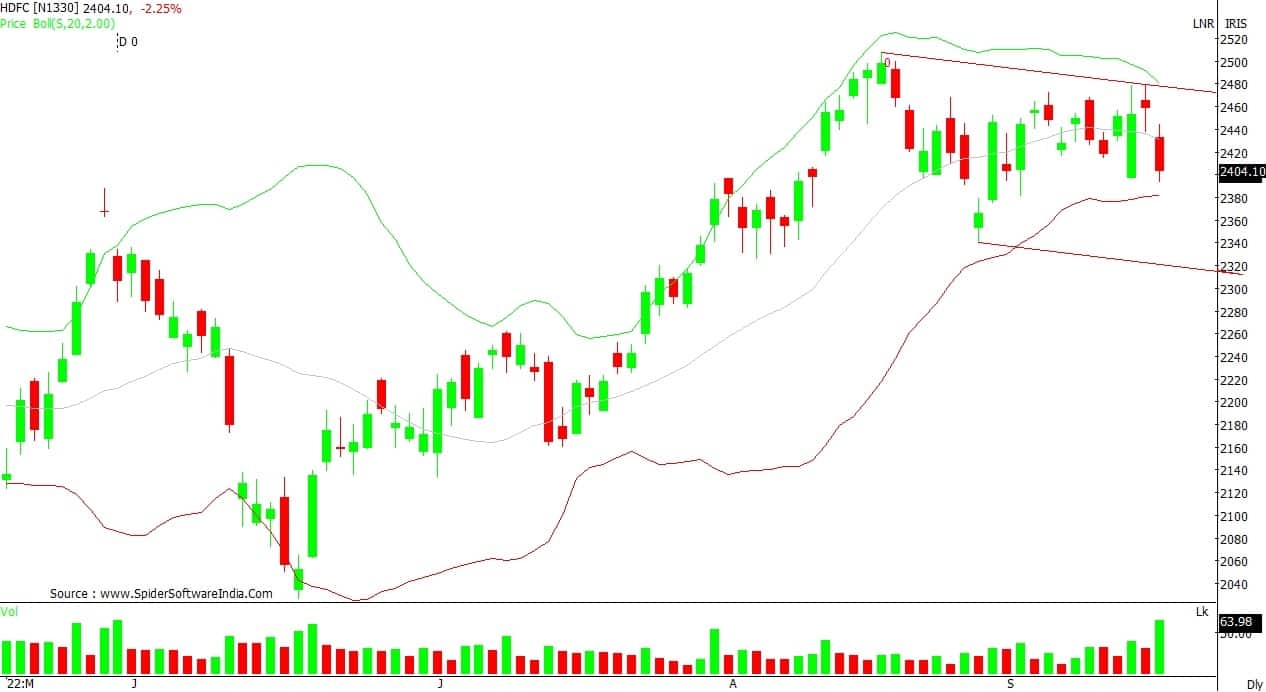 The stock price has closed below crucial support of Rs 917. It has given bearish breakout from last four months' price consolidation.

The price breakout is accompanied by rising volumes. Primary trend of the stock has been bearish with lower tops and lower bottoms.

The stock is placed above all important moving averages, which indicates bullish trend on all time frames. The stock has given Bearish Head and Shoulder breakout with jump in volumes on the daily charts. The sector has been underperforming and same is expected to continue. The stock has confirmed lower top and lower bottom formation on the daily chart. On September 16, 2022, it fell more than 4 percent with jump in volumes.

Pharma sector has been underperforming and the same is expected to continue. Indicators and oscillators have turned bearish on the daily charts. In last one and a half month, the stock has consolidated above its ‘200 DEMA’ and prices have given a breakdown below the support in last Friday’s session.

The selling also witnessed higher than average volumes and thus we could see an underperformance in the stock in the near term. The ‘RSI’ (relative strength index) oscillator is also hinting at a negative momentum and hence, any pullback move towards the supports broken is likely to witness selling pressure.

Hence, traders can look to sell the stock on pullback around Rs 715, with potential short term targets of Rs 679. The stop-loss on short positions should be placed above Rs 735. In the recent upmove, the stock resisted around the 61.8 percent retracement of the previous corrective phase. The momentum readings have given a negative crossover from the overbought zone which indicates probability of a short term corrective phase. On September 14, the stock tested its prior high connecting rising trendline and witnessed a sharp reversal subsequently. Above average volume and rise in future open interest signals that major market participants are in favour of the bears.

Its daily RSI gave the sell signal post a bearish divergence and currently on the verge of a trendline breakout.

Further decline will accelerate, undergoing negative momentum, which could drag the stock towards its intermediate point of polarity initially (Rs 2,812) and its 100-day SMA (Rs 2,577) subsequently.

In case the stock manages to surpass its prior swing high of Rs 3,139 convincingly, probable decline will be negated.

The stock reversed after testing its medium-term supply zone (Rs 410-407) and closed below its 20-day EMA (Rs 393). Earlier, the stock bounced respecting that moving average due to lack of participation (especially bear’s).

We believe the stock will extend the loss as a spike in volume and bearish cross-over in daily RSI signals short-term weakness.

This could drag the stock towards the prior point of polarity, which is placed at Rs 348. On the higher side, its medium-term supply zone will continue to cap the up-move.

In the last week, the stock bounced after a downward oscillation and breached its prior falling trend. The stock formed a Bullish Engulfing pattern and rose to an almost 4-month closing high.

Rise in volume and increase in the future open interest signals that major market participants were in favour of the bulls.

This could lead the stock towards Rs 259, which coincides with its prior high connecting rising trendline. In case of any decline, the stock will find support around its 20-week EMA (Rs 222). Since August 2022, the stock remained above that moving average.