Benchmark indices closed flat while the small & midcap stocks shine in a truncated week which could be a sign that smart money is slowly moving towards small & mid-cap space.

Benchmark indices closed flat with a negative bias, with small and midcap stocks shining in a truncated week, which could be a sign that smart money is slowly moving towards small & midcap space.

The S&P BSE Sensex fell 0.25 percent while the Nifty50 closed 0.21 percent lower compared to 0.63 percent gain in the S&P BSE Midcap index, and 1.16 percent rally in the S&P BSE Smallcap index for the week ended December 27.

As many as 39 stocks in the S&P BSE Smallcap index rose 10-60 percent in 4 sessions that include names like Zuari Agro, Bank of Maharashtra, Force Motors, Kaveri Seeds, Aarti Drugs, Ramco Systems, Parsvnath Developers, Videocon Industries, Jet Airways, and Igarashi Motors, etc. among others.

As many as 10 stocks in the smallcap space fell 10-20 percent for the week ended December 27, that includes names like Vipul, Kesoram Industries, Jaypee Infratech, Uniply Industries, and TGB Banquets and Hotels. 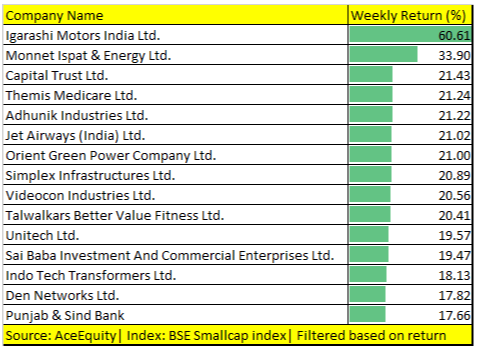 ICICI Securities was the only stock from the S&P BSE Midcap index which rallied in double-digit and closed with a weekly gain of 21 percent.

The stock rallied by more than 17 percent on December 27 to hit a fresh high of Rs 436.70 on the BSE. The move was accompanied with a 6.7-times spurt in volumes.

In the S&P BSE 500 index, as many as 11 stocks rose 10-20 percent that include names like Minda Corporation, Reliance Infrastructure, IDFC, Indian Overseas Bank, and ICICI Securities.

Small & midcaps are trying to catch up and the trend could well continue in the year 2020, suggest experts. The Nifty50 has rallied more than 12 percent on a year-to-date basis but small and midcaps have delivered negative returns.

“We expect this polarized valuation not to sustain, there will be a shift of money from the overvalued large-caps to attractively valued mid and small-caps,” Vinod Nair, Head of Research at Geojit Financial Services told Moneycontrol.

For the year analysts are positive that the money flow will continue as investors try and pick stocks at the bottom of the economic cycle in hope of recovery when the cycle rebounds.

“We expect growth to have bottomed out at 4.5 percent for GDP in Sep quarter. However, we believe the recovery will be very gradual. We expect Midcaps to do better vs. large-caps in 2020 as growth revives and earnings improve,” Dharmesh Shah, Head Technical at ICICI Direct.com told Moneycontrol.