The current quantum and pace of rate hikes is unprecedented. This could have far-reaching repercussions on the global economy, experts say.

During periods of volatility, traders often fall back on past experiences of similar episodes to guide their trading strategies. In periods where central banks such as the US Federal Reserve or the Reserve Bank of India raise key policy rates, market movement turns volatile, and therefore, traders have to shift away from strategies that they lean on during periods of linear up or down movements in the stock market.

In the current cycle of rising interest rates, the fall in the stock market on the hike in interest rate by the US Fed has been much sharper than in the past, an analysis by Moneycontrol showed.

The US Fed is currently undertaking the most aggressive cycle of interest rate hikes in more than 30 years, given that inflation in the US has consistently touched multi-decade highs this year.

That said, unlike in the past, this time around sentiment is also affected by the Ukraine-Russia war that has compounded the problems for investors, not to mention policy makers around the world.

Analysts said the current pace of Fed rate hikes at 150 basis points (bps) in the last three months has been swifter than in the past, when it raised rates by 225 bps over a period of three years from 2015 to 2018.

"The quantum of hikes in a short period of time in this cycle is unprecedented and untested. The kind of disruption in the global economy that these rate rises can create cannot be imagined. The second and third order effects of such hikes could also be quite severe," said Deepak Jasani, Head of Retail Research, HDFC Securities.

In the previous cycle of rate hikes by the US central bank (2015-2018) — 12 instances in all — the Sensex and Nifty were down only three times in the 30 days following the hikes. A quarter after a rate hike by the Fed, the Nifty and Sensex gave negative returns in only two instances while only once were they down even six months after a hike.

The general trend following the rate hikes of 2015-2018 was of the Nifty and Sensex giving positive returns, suggesting investors’ outlook on subsequent rate hikes were much more benign likely because of the central bank being adept at telegraphing its rate hikes to the market.

“No previous hike cycle can be compared to the current one. It is fallacious to do that. Inflation is highest in five decades, and we have not only had the lowest interest rates but also the bond buying was unprecedented. So, an unwinding of both would have repercussions that no past analysis could reveal. That’s the reason why the markets don’t know what’s coming. Volatility can get more intense before stabilising,” said Sandip Sabharwal, founder of asksandipsabharwal.com.

Further, in the previous cycle, markets were more adept at pricing a rate hike as indicated in the fact that in the three months and one month before a hike, in most instances both the benchmark indices gave negative returns to investors.

The Indian markets also fared better than their US rivals during the previous cycle as the S&P 500 index gave negative returns in four out of 12 instances in the month following a rate hike, while they fell in two instances even three months after the event. 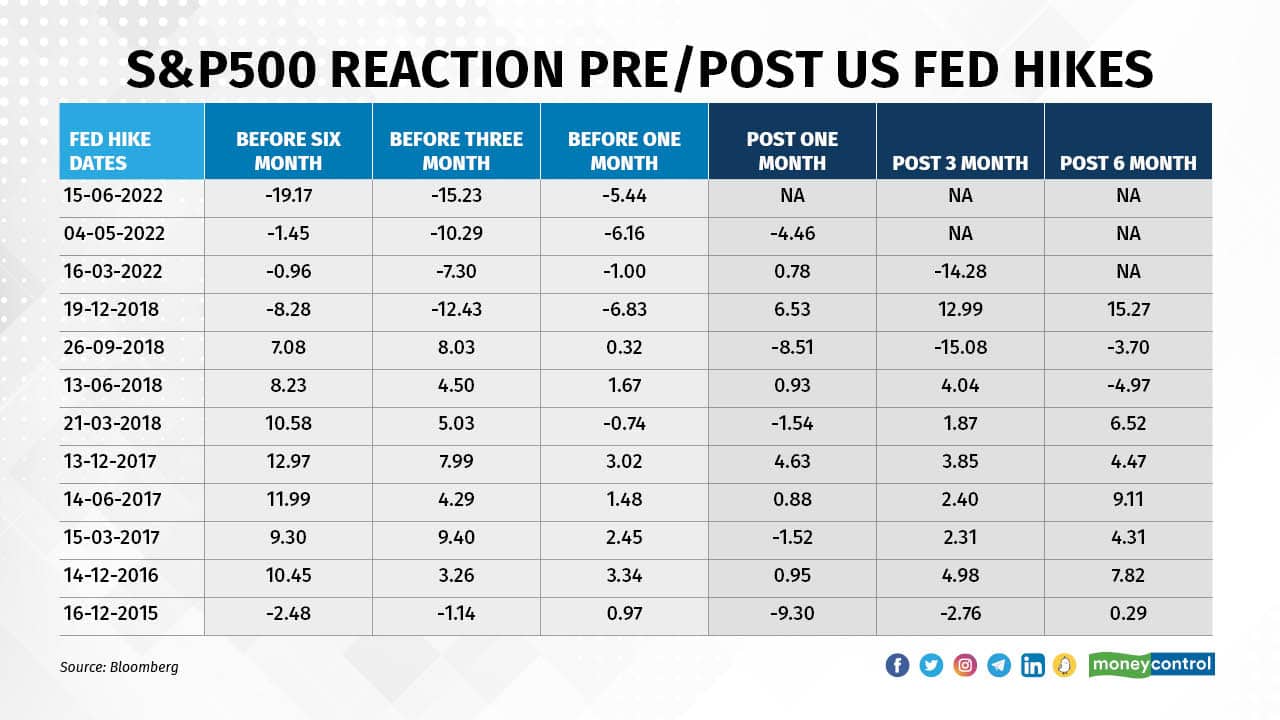 Surprisingly, the US stock market was less adept at pricing in a rate hike by the Fed given that the market gave negative returns on only two instances in the run-up to a Fed hike, data showed.

Going ahead, market participants remain divided on the trajectory of the Fed’s rate hike path and its impact on the stock market at home. While some believe that the Fed will soon go slow on rate hikes because of increasing signs of global economic slowdown, others argue that the Fed will continue to raise rates at its current pace as inflation is unlikely to move towards its 2 percent target any time soon.

Siddharth Khemka, Head - Retail Research, Motilal Oswal Financial Services, expects the Fed's aggressive stance to mellow down over the next few months as it would have taken bulk of rate hikes that should be enough to soften inflation in the US.