On a risk-adjusted basis, the returns from the shorter maturity funds is far superior.

The yields at the short end, as well as the long end, remained more or less stable in the last two months, but the short end rates have moved up a bit in the last two weeks. The change over to normal liquidity management by the RBI has caused some consternation among the market participants. But there is nothing fundamentally different in the approach of the central bank as of now.

The market has been well supported by the surplus liquidity conditions all this while, and this may continue to be the singular factor deciding the course of the markets in the foreseeable future too. While the long end of the curve especially the 10-year benchmark has remained within a narrow range for the most part of this year between 5.80 percent and 6.20 percent, and around 5.90 percent for the most part of the recent past, over the last one year, significant fall in the rates happened at the short end of the curve if you take a closer look at the one-year CD and CP rates. This is the product of the easy money policy of the central bank and the liquidity injection that has been happening through the targeted repo operations.

The accommodative policy of the RBI is likely to continue till growth becomes more or less sustainable, and near-normalcy returns with a rebound in economic activity. But there are a couple of factors that should be kept in mind while taking a view of the rates. First of all, the rate of inflation indicated by the consumer price index still continues to be high, though at present it is lower than the threshold set by the RBI, as evidenced by the latest CPI.

Inflation from food component seems to have abated for the time being. Any persistent rise in price level may compel the RBI to moderate the liquidity support over time. Brent has been rising recently, and it is perched above the $55 a barrel level, and this upward trend in oil prices may remain intact in the immediate term and this could further fuel inflation across segments. Therefore, threats on account of rising price level remain elevated compared to any time in the recent past. These factors could trigger some pressure on yields.

One factor that has been a great consolation for the markets is the huge inflows of liquidity which have been coming into India from overseas investors. This liquidity is being sterilized by the RBI to some extent, but the point is that flows of such magnitude generally lead to softening of yields. But with the domestic liquidity, which itself caused a softening in the last seven to eight months, the scope for any further significant softening remains seriously limited. The clearer picture of government finances and the fiscal glide path, which will become available with the Union Budget, is also eagerly awaited by the market. While there are no significant risks of higher rates in the immediate future, one needs to closely follow the emerging patterns in liquidity management by the RBI to decipher the likely trends in market yields. 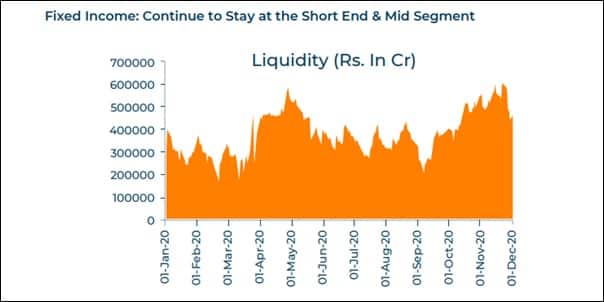 The recommendation given during the course of the last year has been to stick to the short end of the curve and to avoid the long duration products. We continue with the same advice for fixed-income investments. This approach has paid good dividends. The investments into the recommended Banking and PSU Debt Funds, Short Duration Funds, and Corporate Bond Funds generated returns in the range of 10 to 12 percent while if one was to stay in gilt funds the returns would be around 13 percent to 14 percent. On a risk-adjusted basis, the returns from the shorter maturity funds are far superior.

Disclaimer: The views and investment tips expressed by the expert on are his own and not those of its management. Emkay Global Financial Services and Emkay Wealth Management advises users to check with certified experts before taking any investment decisions.