Aarti Industries, Bajaj Finance, Biocon and HDFC Bank, among others, feature in the list of 11 stocks that gave positive, double-digit return in the past four years in BSE 500 stocks list.

The year 2018 proved to be a tough one for Indian equities with the Sensex clocking minor gains of 6 percent as against 28 percent in 2017. The BSE 500 too posted 3 percent negative return versus a gain of 36 percent in  2017.

An analysis of the performance of BSE 500 companies between 2015 and 2018 suggests calendar 2018 was the worst. During the year, 76 percent of BSE 500 stocks closed with negative returns. Interestingly, 11 stocks were able to post at least double-digit returns in each of the last four calendar years, that include the likes of Aarti Industries, Bajaj Finance, Biocon and HDFC Bank, among others. 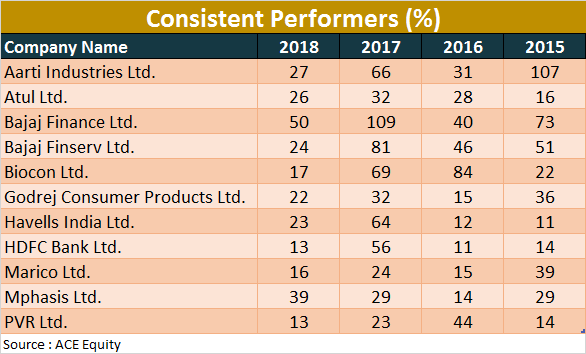