The battery material’s price is set for a second weekly decline in China, while shares in lithium suppliers are falling.

Lithium ore falls from a chute onto a stockpile at the Bald Hill lithium mine site, co-owned by Tawana Resources Ltd. and Alliance Mineral Assets Ltd., outside of Widgiemooltha, Australia, on Monday, Aug. 6, 2018. Australias newest lithium exporter Tawana is in talks with potential customers over expansion of its Bald Hill mine and sees no risk of an oversupply that would send prices lower.

Lithium has run into a soft patch as its extraordinary two-year gain collides with signs of wariness over near-term demand from China’s electric vehicles.

The battery material’s price is set for a second weekly decline in China, while shares in lithium suppliers are falling. The culprit is the prospect of slower EV sales in coming months, which could blow back through the supply chain to raw materials. EV registrations plunged by more than a fifth in October from the prior month, data on Friday showed.

“It’s likely for lithium prices to face some small correction until early next year,” said Susan Zou, Shanghai-based analyst at Rystad Energy. “Battery makers need to destock while EV manufacturers are about to meet their annual targets. Meanwhile, they face elevated costs for raw materials and traditionally weaker consumption in the first quarter of the year.”

Lithium prices in China have about tripled over the past year, according to data from Asian Metal Inc., and rallied more than 1,200% since 2020 as supply struggles to match rampant demand. 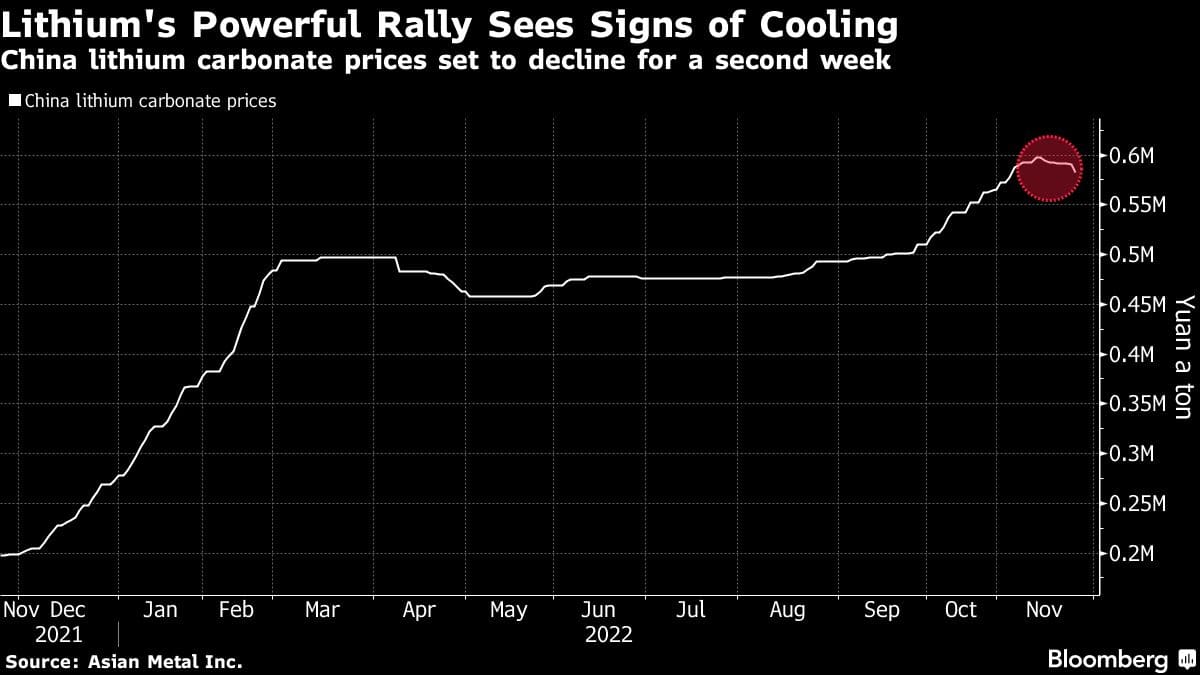 “We see the near-term lithium market remaining tight, supporting lithium prices,” analysts at Morgan Stanley wrote in a note Thursday. “However, we note that there is likely to be some price pullback when underlying demand for EVs starts to weaken sequentially, and industry players may become more cautious about placing orders and building inventory.”

Chinese subsidies for EVs that encouraged rapid expansion over the past decade are due to be phased out at the end of 2022, though there is speculation they may be extended. Chinese EV giant BYD Co. is already raising the price of some cars, citing changes in government subsidies and volatile input costs.

“Whether the downturn in lithium prices remains sustainable would hinge on whether consumers would ultimately foot the bill for higher priced EVs,” said Keith Tan, associate regional pricing director for Asia metals at S&P Global Commodity Insights. “With government subsidies on EVs out of the picture next year, some in the industry think that the odds are stacked against further gains.”

Last week, China urged battery producers to expand output only when appropriate and avoid “vicious competition,” adding that it will punish companies for hoarding or price speculation. EV sales will be underpinned by rising economies of scale and global government stimulation, Citigroup Inc. wrote in a note this week lifting its short-term lithium forecasts.