Despite the pipeline drying up, the big four tech companies remain bullish on client spending and the demand outlook for large deals in the upcoming quarters

Large deals of over $100 million and mega deals shooting past $400 million have begun to slow down through the past few quarters for the top four Indian IT services companies — Tata Consultancy Services (TCS), Infosys, Wipro and HCL Tech — as clients have turned cautious amid an increasingly uncertain macro environment.

Even as these companies remain bullish on the business outlook, analysts have said clarity on larger deal wins will only emerge after the first quarter of 2023.

According to data from CareEdge Research accessed by Moneycontrol, there was no net new QoQ client addition for the $100-million-plus revenue bracket across these four companies in the second quarter. In fact, the total QoQ client addition across revenue buckets decreased to 90 from 154 in Q2FY22.

The research firm called it “an implied higher base effect on account of a sudden post-pandemic ramp-up in Q2FY22". However, on a sequential basis, client additions remained largely flat. 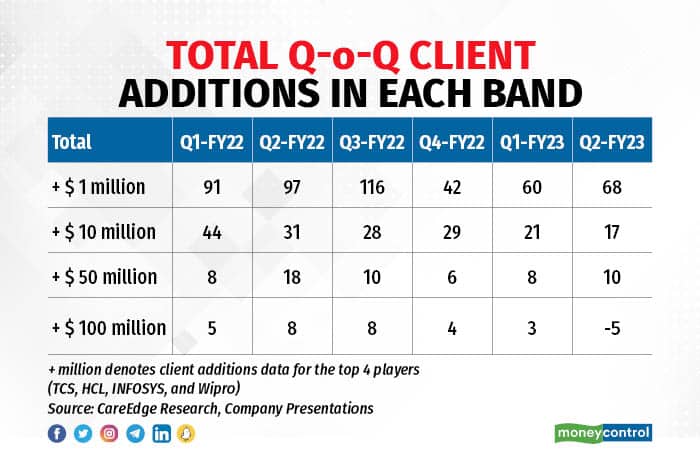 According to Phil Fersht, CEO and Chief Analyst, HFS Research, the days of the mega deal are pretty much over and have been for a while now.

“The only 'mega deals' we are seeing are consolidations of existing services under one primary service provider, where costs are lowered due to the economics of scale and the service provider is willing to take on more risk to beef up financial results. Most deals are in the $10-30 million range,” he told Moneycontrol.

The last two years were marked by a sudden surge in demand and digital transformation deals across sectors for IT services companies, some of which have now started to cool down.

“The last quarter was a big super cycle for renewals. We’ve also seen the tail end of the big digital transformation projects after Covid. We’ll see a new cycle come back from the 2020 contracts earlier in Q1 of 2023,” said Ray Wang, founder and principal analyst, Constellation Research.

“The mega deals are very rare, and even the large deals are reducing now. The reason for that I think is mentioned in the earnings calls of both TCS and Infosys. They are seeing — and we are also observing within clients — a kind of hesitancy and some delay in decision making. So, that’s the reason that these kinds of deals are rare and are increasingly on hold,” said Mrinal Rai, Principal Analyst at technology research firm ISG.

According to Peter Bendor-Samuel, founder and CEO, Everest Group, mega deals trend with the economic cycle. In the last two years, there has been an overall decline in mega deals as the market was more focussed on digital transformation, which requires smaller deal structures.

“We have also been at the tail end of the modernisation cycle, which has moved the prime target area of mega deals (legacy stacks) and moved into the cloud. On top of this, the market is in a moment of hesitation, caught between the need for further digital transformation and the prospect of a deep recession. Hence firms are taking a wait-and-see point of view, which has frozen many of these potential deals,” he told Moneycontrol.

“Given that the gestation period of a mega deal is at least six months and normally 9-12 months, we can expect these types of deals to be back with momentum in the second quarter and building after that,” Samuel added.

ISG’s Rai added that mega deals are increasingly becoming obsolete as the needs of clients have evolved.

“When we say smaller deals, these are digital transformation deals and usually the older mega deals used to involve complete IT infrastructure, which is now very rare in the industry, I don’t see these kinds of deals happening anymore. Even in the $400 million bracket, there is a digital component in each and every deal,” said Rai.

He added that clients are cautious right now and trying to spend on areas that will give quick results because the cycle of technology also remains unpredictable.

Across companies and research firms, the outlook around demand seems to have remained the same — cautious, delayed but steady, though it may vary from sector to sector depending on the impact of the macro headwinds.

He added, “Mega deals are a hedge for both the buyer and the IT services provider. Given the shortage of labour, these deals ensure stability. We’ll probably see more as we see contracts consolidated in 2023.”

Currently, technology clients are cooling down from the pace at which they grew in the past couple of years. Having said that, technology has now also become more of a non-discretionary spend for most companies.

“The long 10-year arc of digital transformation has resulted in a much more intimate and dynamic relationship between operations and technology. This has moved substantial tranches of IT work from discretionary to essential and has established a much higher demand floor than in past recessions. Hence we are seeing demand stay strong in the EU, which is clearly much deeper into a recession than the US,” said Samuel.

Fersht, however, believes that the mega deals era is gone amidst the increasing need for profitability.

“The mega deal days are pretty much behind us, unless a service provider is willing to take a calculated risk to consolidate services for an enterprise client. I see service providers more focused on profitability than mere growth, especially as we grapple with the next 2-3 quarters, which are likely to be very challenging,” he said.

Where do the IT companies stand?

Albeit with an air of caution, all the companies remain bullish on client spending and demand outlook for large deals in the upcoming quarters.

At Infosys, which counts deals in the $50 million-plus revenue band as large deals, CEO Salil Parekh said during the Q2FY23 earnings conference with analysts that the company had begun a pivot towards cost-focussed programmes within the large deal pipeline. Infosys’ operating model and offerings are agile, and can deliver value for clients in this evolving macro environment, said Parekh.

He added, “We had great growth in Q1 and Q2, and we continue to see that the overall pipeline for large deals is quite strong, in fact, it is larger than it was in the last couple of quarters. We also see macro points …, specifically mortgages in financial services, some aspects of retail or hi-tech or telecom. So, keeping all that in mind we came with a view on the (revenue) guidance, which was 14% to 16% earlier, and are now moving it to 15% to 16%, which is the higher end of that band.”

Addressing HCLTech’s Q2FY23 earnings conference, C Vijayakumar, CEO and MD, said, “…since January, we have increased prices and we continue to win deals, which are at a higher margin than what we would have won in the previous fiscal. And when you win large deals … depending on the deal size, we’ve generally been engaged in deals where we don’t have to take any major upfront kind of investments, that’s been the strategy as well. So, there’ll be a little moderation to start with and then the margins will pick up in large deals.”

TCS, which won two mega deals of almost a billion dollars each in Q1, didn’t have any mega deals in Q2. Addressing the media, CEO Rajesh Gopinathan said, “We don’t have any mega wins, the largest one is in that range of 400 million and we have a few in that plus minus range. Deal wins are large but nothing above 500 million per se to call out.”

Wipro CEO Thierry Delaporte said that the company is experiencing a real shift in the market as clients increasingly turn to them. “And based on all these factors, we remain confident of gaining market share in the coming quarters,” he said.