Expansion of connectivity benefits Indian passengers. Delhi, the largest airport in the country, continues to rule the roost with non-stop flights to 76 destinations, followed by Mumbai with 67 and Bengaluru with 66. Hyderabad occupies the fourth spot with 61

The domestic aviation market in India is now close to pre-pandemic levels. As of December 5, India recorded 30 consecutive days of domestic passenger numbers being over 300,000, with the highest being on November 21, when 393,245 passengers took to the skies.

IndiGo has reached pre-pandemic levels of departures on the domestic segment, and that turns out to be the highest ever for the market leader. Even as the overall count of flights hovers between 85 and 90 percent of the approved schedule, the pandemic has ensured that there is more connectivity than ever before.

While keeping the flight count below pre-pandemic levels, airlines have added more non-stop flights to their network! This has meant that passengers across most cities in the country have more non-stop destinations connected to their airport than was the case before the pandemic. It is very much in line with a general prediction that passengers are likely to opt for more non-stop connectivity over flying one-stop to avoid transfers and related hassles.

Who gained the most?

Delhi and Mumbai added 11 new destinations to their networks, which were largely driven by flights under the Udaan Regional Connectivity Scheme and new airports being operationalised. Lucknow added 10, becoming the last airport in the list to add double-digit new destinations. Bareilly, Bhuj, Darbhanga, Kalaburagi, Bidar, Jagdalpur, Kushinagar, Kurnool, Bilaspur, Pakyong, Rupsi and Tezu are the airports which were either inaugurated in the last two years or have seen resumption of service! 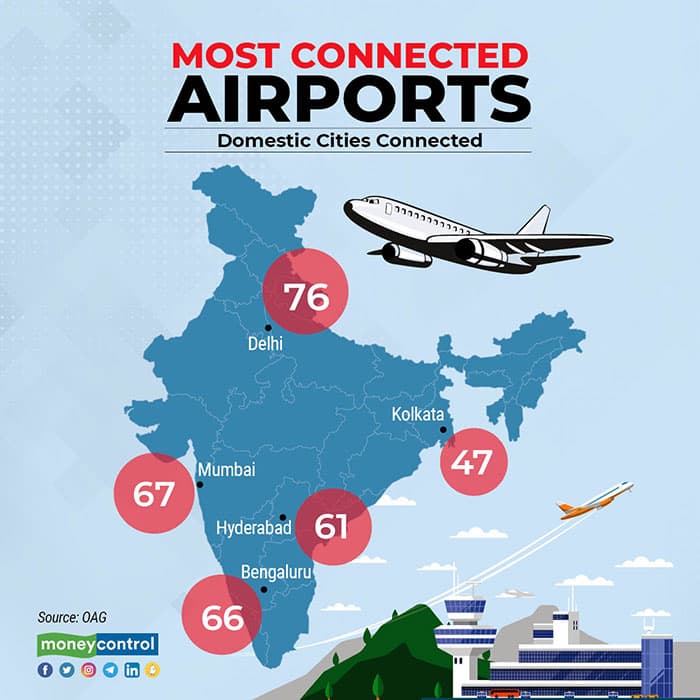 Airports Authority of India (AAI) owned Kolkata, Chennai and Pune occupy fifth, seventh and eight spots with 47, 43 and 28 connections. Adani Airports-operated Ahmedabad, Guwahati and Jaipur take up the sixth, ninth and tenth spots to complete the top 10. Ahmedabad is connected to 44 destinations while Guwahati and Jaipur are connected to 24 each.

If a similar template gets played out for international flights when things stabilise, it could be good news for IndiGo, which has been harbouring ambitions of flying non-stop in the range of 6-7 hours with its focus on the four major metros in the country.

This will also put a question mark over the middle-eastern hubs and could well be good news for the Tata-owned Air India, the only carrier or airline group to have wide-body aircraft in its fleet.

While there may have been a dip in traffic, the expanded connectivity is helping passengers more than ever.
Ameya Joshi runs the aviation analysis website Network Thoughts.
Tags: #airports #aviation #Business #coronavirus #IndiGo #Travel
first published: Dec 6, 2021 12:21 pm