Even as the government moves to extend the final deadline for resolution of insolvency and bankruptcy (IBC) cases from the current 270 days to 330 days, many lenders and bidders remain sceptical about the desired effect of the changes in regulations.

“Presently, one in every three insolvency case in National Company Law Tribunal (NCLT) has crossed its 270-day deadline and the delays have been almost entirely because of the court process,” said a senior banker who is part of the Committee of Creditors (CoC) of several high-profile IBC cases. “The recent amendment passed by the Cabinet is a step in the right direction in extending the total resolution period to 330 days. Another 60 days have been given so that courts can settle last-minute litigation. Very often, in all these pending NCLT cases, you will find that the committees of creditors have not delayed the process and even when they have been asked to revisit a resolution plan, it has been done on time. So, I think it is largely getting delayed after the CoC approval owing to frivolous litigation.”

On July 17, the Union Cabinet cleared major changes to the bankruptcy law that will enforce a strict 330-day timeline for the insolvency resolution process, including any legal challenges, and uphold secured creditors’ priority right on the sale or liquidation proceeds of bankrupt companies. The earlier deadline had been 270 days, starting from the day when a case had been admitted to bankruptcy. As cases played out though, the court ruled that the original 270-day limit applied to only the CoC approving a resolution, and not to subsequent litigation. The recent amendments make it clear that the new 330-day limit applies to judges as well. 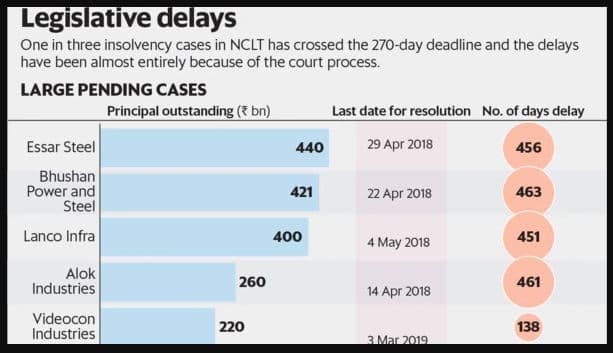 “The delay between the CoC’s approval of a plan and the NCLT bench approval costs lenders a lot of money,” the banker said. “If you look at just three large cases that have received CoC approval but are awaiting the NCLT go-ahead, it’s a considerable financial loss for banks. In the case of Bhushan Power and Steel, where the financial creditors are expected to receive Rs 19,350 crore, every day of delay leads to a notional interest loss of Rs 4.2 crore, based on the marginal cost of lending rate of 8.5 percent,” the banker said.

“In the case of Alok Industries, it’s Rs 1.17 crore a day and in Essar Steel, nearly Rs 10 crore a day. The sooner this money comes back into the banking system, the sooner we can re-deploy it into the economy.”

“I think even the new 330-day deadline may not be viable, but we have to see. If the courts have to decide a case, they have to listen to all parties. For us, the funding for our acquisitions is tied up and we have to see how long this will take. The cost of funding will depend on when we make the drawdown, what the market conditions are at the time and what the interest rate scenario is. Right now, it’s difficult to find low-cost capital for industry,” Rao added.

As cases drag on, costs rise for both lenders and corporate buyers of stressed assets. However, the legal system is ill-equipped to deal with the sheer number of cases that have been admitted to insolvency since the IBC came into force.

“The NCLTs and NCLAT are overloaded with matters. First, the number of members in the benches are few,” said Sitesh Mukherjee, partner and head of disputes, Trilegal. “Second, there are so many stakeholders involved — financial creditors, operations creditors, government agencies, existing promoters, shareholders, employees and resolution applicants, all with competing interests. That makes things quite complex.

“Ultimately, the institutional capacity has to increase,” Mukherjee said. “Today, it doesn’t have the capability to meet the new 330-day plan either. We are not even at 25 percent of the capacity that is actually required, so setting any deadline for resolution will be unachievable.”

“The IBC is a modern piece of legislation and it requires multi-disciplinary expertise. We need members who are well-versed in contract law, debt law, and modern financial transactions. I think training will also be useful. The government can consider appointing practising lawyers or even general counsels of corporates who can do a two-to-three year tenure on an ad-hoc basis to increase the bandwidth of the judicial system dealing with insolvency,” he said.